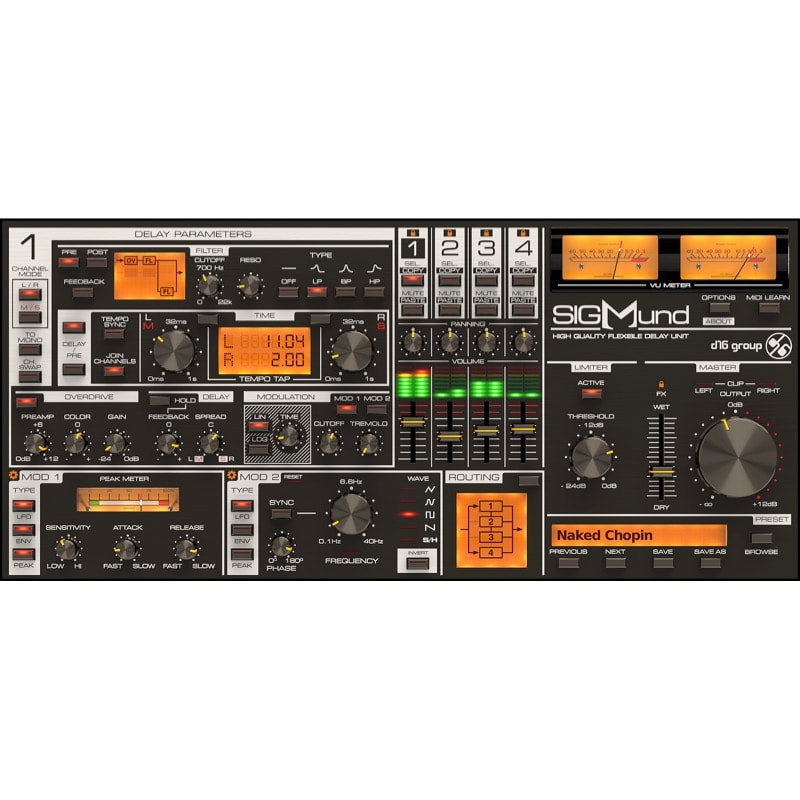 Sigmund is far from just another delay: it consists of four discrete delay units, each with its own, independent set of parameters offering an incredible degree of sound-shaping freedom. There’s an ancient saying, often attributed to Aristotle: The whole is greater than the sum of its parts. With Sigmund, this is especially true: each of the delay lines has complementary modules built-in, independent from the feedback loop including a Multi-Mode Filter, Overdrive, Amplitude Modulator, and more.

D16 Sigmund in one take

Sigmund’s four delay lines can be interconnected with each other in practically every manner possible. The plugin offers a choice of nine different routing topologies which give access to completely new dimensions of sound creation. For example, say you have your delays currently running in parallel but would like to have a cascade of serially connected delays instead: you can reconfigure them instantly by choosing your desired algorithm with just a click of the mouse. For even greater convenience when working with Sigmund, the output signals of each of the four delay lines are combined in a special, purpose-built internal mixer to ensure a seamless transition between algorithms and greatly speed workflows.

The signal processing solutions we chose to implement in Sigmund have allowed us to achieve an unprecedented level of audio quality! A signal being routed sequentially through each processing block suffers no loss in fidelity from one to the next and no undesirable artifacts are introduced as is so often the case with some of the more widely used but inferior solutions. With Sigmund, each delay line is absolutely alias-free: the only sonic colorations you’ll ever hear are the ones you’ve intentionally created. The signal path design process that went into Sigmund has been zero-compromise from beginning to end: in fact, the sound quality is so high, the processing so pure that it’s possible to work with even the smallest delay times, even down to one-tenth of one millisecond with zero artifacts emerging. Thus, it’s possible without any tricks or half-measures to use a single delay line not only as a traditional delay effect but also as a chorus or flanger and in some of the highest audio quality theoretically possible!

Sigmund’s user interface has been designed from the ground up to be as intuitive as possible. Everything is presented as if on a silver (or brushed aluminum) platter, cleanly and clearly laid out and with instant access to each section and it’s parameters. A convenient preset browser allows for quick auditioning of the extensive, included factory preset library. This, in combination with a novel system of padlocks for locking individual sets of parameters when changing presets, allows you to zero in on the desired effect with extreme efficiency. In skilled hands, these features become powerful weapons.