Softube British Class A For Console 1 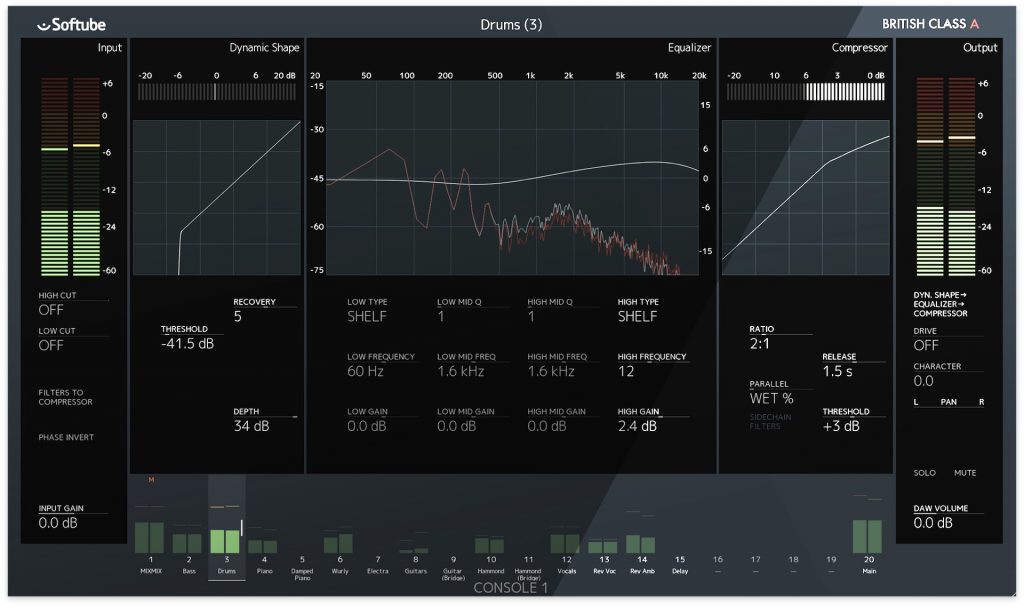 Add body and character to your tracks with a Console 1 strip inspired by the most timeless and loved mixing tools ever. Paired with the smooth workflow and hands-on control of Console 1, British Class A gives you the perfect mix solution for the DAW based studio.

Let your tracks soak in the fat transformer crunch of the input stage, get great tone with the honey-sweet equalizer, control dynamics with the beautifully musical compressor, smash them into oblivion with the limiter, and keep things tight and tidy with the smooth gate. British Class A For Console 1 collects the most coveted and distinctive sounding units of the pro audio world in a single channel.

Feast on a few details of the different components:

In the early 70s, recording engineers were quick to figure out that they could use these amazing consoles to add a rich and dense tone to recordings. The trick was to push the transformer-coupled input stage harder than it was really designed for. Still a studio trick used today by the lucky few with a hardware original: get your hands on the British Class A for Console 1 and try it for yourself. The transformers we’ve modelled here were used in the first and most coveted generation of the original analog input channels, so Drive is guaranteed to give you the most authentic British sound.

To ensure the model’s accuracy, the British Class A Equalizer has been based on several different original vintage hardware pieces. While the sound is indistinguishable from the analog originals, the British Class A Equalizer offers even greater flexibility by incorporating dual mid bands instead of a single one. This lets you shape your sounds in creative ways that with the original hardware would have required two daisy-chained equalizers.

The British Class A Compressor adds a full-bodied and syrupy tone to the sound source, in addition to its highly musical gain reduction. The model is based on the classic British diode bridge compressor/limiter, which first came out in 1968. But just as with the equalizer, we’ve added extra flexibility, incorporating a modification used by many top-level studios to improve control of attack times and additional release times.

The original compressor unit incorporated both a compressor and a limiter. For maximum usability, we have modelled the two separately and installed them as two distinct plug-ins in British Class A. Use the British Class A Limiter for exceedingly subtle level control—or for beating your sounds into submission.

One of the lesser-known classic British units, the original analog gate shares the same form factor as the equalizer and compressor units we’ve modelled. Just like the other units, it is a transformer-based class A design, hand built in the UK. The British Class A Gate helps keeping tracks tighter and cleaner. Using the sidechain input makes it very useful for ultra-musical keying purposes.