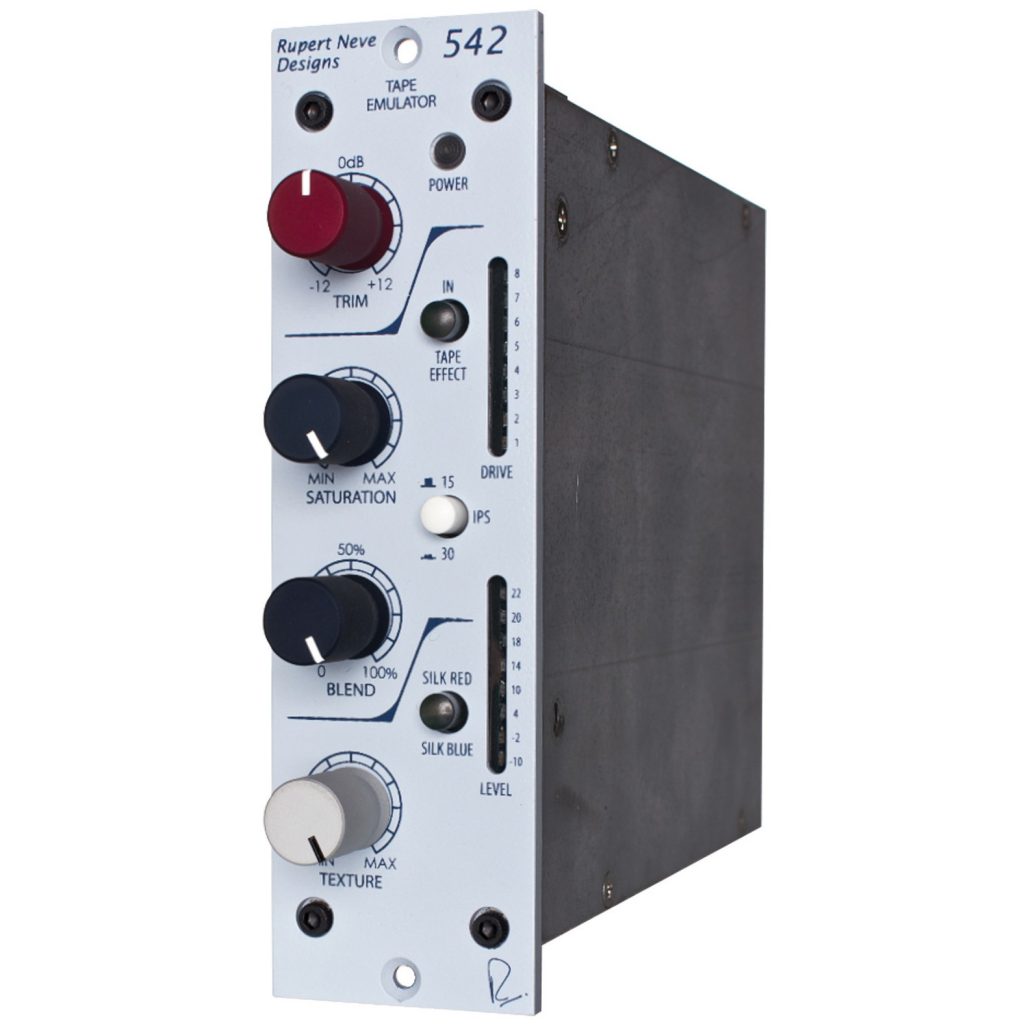 Digital recording has two characteristics that can be off-putting to our ears: transient capture and thinness in the midrange. While its ability to capture transients in all their glory can be a strength, it’s also a weakness insofar as digital recording captures the outline of a sound better it does its body or resonance. Analog tape, on the other hand, doesn’t do transients as well, but it shines on resonance. On the other hand, there are times when we want transients to be tamed a little bit. Tape also adds 2nd– and 3rd-order harmonics. Once engineers recognized the problems associated with digital capture and reproduction, a number of tape-emulation plug-ins arrived on the scene, many sounding quite good—but nothing does analog like analog, which is where the RND 542 Tape Emulator comes in.

What it does it do?

The ultimate “color box,” the 500-series 542 delivers the same thick, musical simulation of tape while drastically enhancing creative control via a number of features. In addition to the “true tape” circuitry, great for bringing out 3rd-order harmonics, the 542 incorporates a soft-clip circuit that tames the harshest sources and enhances 2nd-order harmonics. It also features a variable and versatile Silk/Texture circuit for three transformer tones in one, and a wet/dry control to blend in the perfect amount of saturation.

How it does it work?

Unlike digital emulations, the “True Tape” drive circuit works by feeding a custom-designed transformer, acting as a record head, which in turn is coupled to a equalized replay amplifier. As the voltage rises on the “record head,” saturation increases and a soft clip circuit engages at higher levels to round off peak transients. The sound of the tape circuit can be further modified with selectable 15/30 IPS (inches per second) modes and a pre/post-tape blend control. In addition to the tape circuit, the 542 also has the variable Silk and Texture circuitry found in the Portico II series of modules, which allows the engineer to fine-tune the harmonic ratio and tonality on the output transformer.

Selects the pre-emphasis / de-emphasis, record / replay tape characteristic. The 15IPS mode has a significant “head bump” in the low frequencies centered around 60Hz, as well as a more pronounced roll of in the high frequencies. The 30 IPS mode is generally a flatter response through the high-end with a “head bump” around 120Hz.

Controls the mix of pre- and post-tape signals. This allows the engineer to dial in a subtle amount of the tape effect, to better control the amount of saturation, tone and soft clipping in the post blend signal. As the signal gets more saturated, dialing back the blend can be a great way to impart the feel of tape, while maintaining a similar level of detail and transparency. NOTE: The blend control does not affect the Silk and Texture controls, as that circuitry is located at the physical output of the unit.

A soft clip engages in the “True Tape” circuitry when the drive meter hits 5 (first yellow LED), and becomes more apparent at higher levels. The soft clip can be used as a way to tame overly transient material like drums, and can be controlled further by using the blend control.

Pushing the Silk button engages the Silk Red circuit, and pushing it a second time introduces Silk Blue circuitry. Silk reduces the negative feedback on the output transformer, adding harmonic content as the texture is increased. Silk Blue mode features more saturation in the lows and low mids, whereas Silk Red accentuates the saturation in the high mids and highs.

Two eight segment LED bar-graph meters are fitted to the 542 for output level and drive metering. The level meter shows the output level of the 542 before the Silk circuit, and the drive meter reflects the level on the “record head” when the tape effect is engaged. The soft clip circuit is present at Drive levels above 5.

Rupert Neve: “While creating functional 500-series modules is relatively simple, designing those modules to equal their non-500 series counterparts with the current, voltage and space restraints is quite challenging. In creating our own 500 Series Modules, we experimented with a number of different transformer and circuit designs to achieve the same presence and sweetness found in the Portico Series of modules. The result of these efforts is that outside of the slightly lowered headroom, our 500 series modules are nearly indistinguishable from standard Portico Series modules, and are perfectly suited for studios of the highest-caliber.”

The 542 consists of a line driving amplifier having transformer balanced inputs and outputs. The sonic quality of these amplifiers is such that by providing galvanic isolation, simple single-sided circuit topology and freedom from grounding problems, they are capable of enhancing the sonic quality of many signal sources, especially those of digital origin. The sonic “signature” is one of extreme purity and the image is consistent with that of Rupert Neve’s original designs of 35-40 years ago.

No need to take up valuable studio real estate with an old 24-track tape machine when you have a Rupert Neve Designs 542 Tape Emulator in your 500 lunchbox. For more information, call or chat online with your Westlake Pro Sales consultant today.

Measured at +10dBu, trim at unity