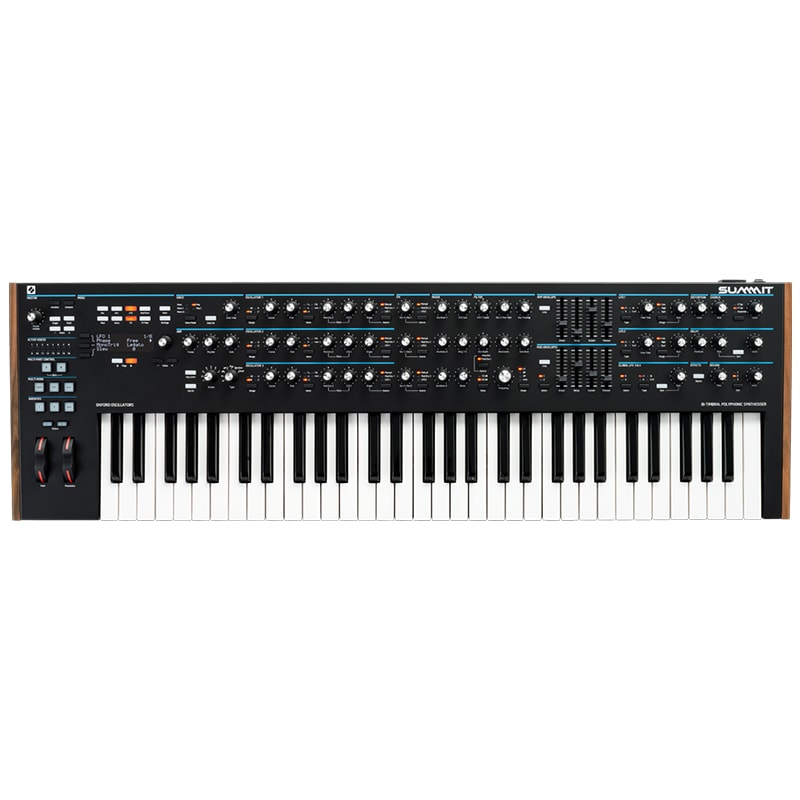 Summit’s digital New Oxford Oscillators offer subtractive, FM, and wavetable synthesis, and feed into genuine analog dual filters, distortion, and VCAs. The multitimbral engine enables merging and combining of two complete and independent patches, while up to 16 simultaneous voices deliver enough harmonic depth for even the richest of pads.

The best sounding synthesizer Novation has ever made

Summit doubles the power of Peak’s digital New Oxford Oscillators up to 16 voices and two parts, and adds a wealth of new features and a premium-quality five-octave keyboard. A synth much greater than the sum of its parts, it gives the serious producer or performer everything they need to design and play stunning basses, leads, arps, pads, effects, and beyond.

Summit takes Peak’s architecture and workflow to new heights, with a swathe of extra front panel controls for hands-on wrangling of FM, effects, LFOs, and more; dual filters with six LP/HP/BP combinations; audio input for processing external sources with the onboard effects; and auxiliary audio outputs.

Analog where it matters

The Wavetable Editor unleashes the power of the wavetable oscillators. It features drawing tools and a Live Edit mode, so you can draw your own oscillator shapes and preview them in real-time. Audio import lets you load in your own audio to be used as the oscillator waveform. Included is a curated selection of space-themed audio from the NASA sound library, plus exclusive content from production giants Noisia.

Two Peaks in one synth – and then some

The 16-voice, multitimbral engine combines two simultaneous patches. Split or stack them for keyboard-divided or layered sounds, or switch the entire synth between two separate and independently controlled setups, perhaps using one as an effects processor for an external input source.

Also, Summit can use all your Peak patches

The New Oxford Oscillators output to true analog filters, with origins in the classic OSCar synth, and three stages of analog distortion give you ample saturation options.

Summit’s dual filter is switchable between six paired combinations of low-pass, high-pass, and band-pass modes at 12dB/octave, or any single mode at 24dB/octave, for a broad range of sonic possibilities.

Audio in and auxiliary audio out

Hook up external instruments for processing with Summit’s onboard effects, while using it as a synth at the same time.

Onboard reverb, chorus, and delay effects are hosted on the FPGA. They’re also controlled directly from the front panel, and available as modulation targets in the dedicated FX Mod Matrix.

Be the first to review “Novation Summit” Cancel reply