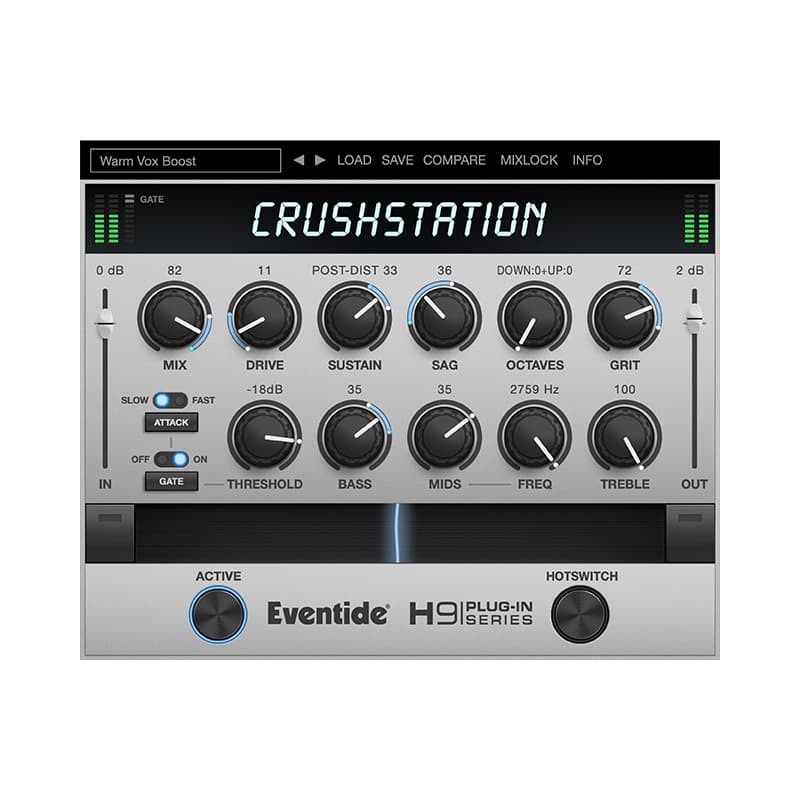 CrushStation is a versatile, best-in-class, stereo distortion platform for your Mac, PC, or iPad/iPhone. Its controls can drive your tone from creamy saturation to a brutal sonic assault. But distortion is just the starting point. CrushStation brings multi-effects to the mix by adding a three-band EQ, Compression, Octave Mix and, Eventide’s unique take on failing hardware, the Sag control. Use the MIX Control to blend your dry signal with CrushStation to create parallel compression, distortion, and other creative effects.

CrushStation’s combination of ingredients creates a plug-in that excels at the three broad ways distortion effects can be deployed. FX expert and author, Alex Case, refers to them as the “3Fs”: FIT, FIX and FEATURE.

Originally developed for the Eventide H9 Harmonizer pedal, CrushStation has been enhanced for experimentation and live performance and fine-tuned for your desktop, laptop, or iPad. Like all H9 series plug-ins, CrushStation is designed to ‘play’. The Ribbon lets you sweep the effect between two completely different settings. On one end you can have a gritty, dark EQ and on the other a wall of sound using heavy Compression, Sag, and Octaves during a solo or intense transition. Even a dramatic effect can become boring if it remains static throughout a track. Use the Ribbon to add a bit of ‘life’ while you’re mixing. For desktop users, plug in a MIDI keyboard and gain control of the Ribbon via the mod wheel for tactile and nuanced morphs and sweeps.

The plug-in comes loaded with 35 Factory Presets that cover the many ways that you’ll want to use it. Presets capable of adding spice, flair, crude, and crunch to suit a variety of production styles. Get guitars, bass, and synth to sit perfectly in the mix by dialing in warmth and depth with “PunkRock Lobster.” The Grit control in “Fat n Snappy” adds preamp-style distortion that can help bring out kicks in the mix. “Big Pop Octaves” adds subtle distortion and lower octaves for unique pitch blending vocal effects. Further fine-tune your sound using the three-band EQ to tame cymbals and vocal sibilance.

Be the first to review “Eventide CrushStation” Cancel reply