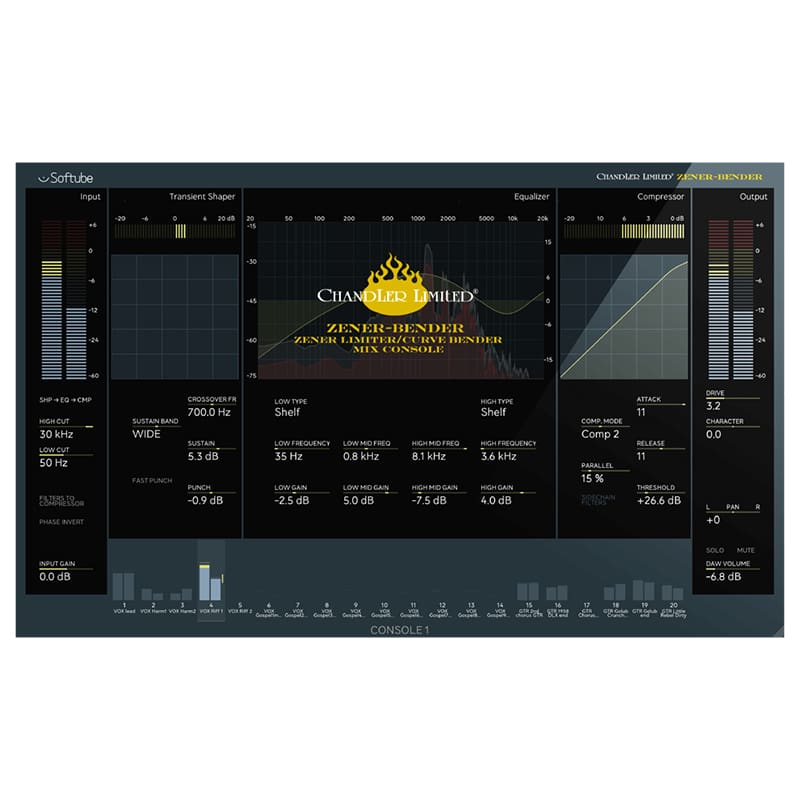 A powerful and musical modern channel strip with the unique vintage sound of Chandler Limited. The Zener-Bender for Console 1 combines the crisp and colorful character of the Curve Bender mastering equalizer with the big, punchy Zener Limiter to bring class, history, and most crucially of all, a phenomenal sonic impact.

Component-modeled with Softube’s customary care and experience, these units together can take charge of any mix. The Zener-Bender for Console 1 is included in the Zener-Bender channel strip collection.

The color of the Curve Bender

An extremely musical and characterful mastering equalizer. Can be subtle or drastic, but always makes things sound better.

More than the sum of its parts, the Zener-Bender is a uniquely vintage-sounding powerhouse with modern flexibility and workflow, especially when coupled with the hands-on control of Console 1.

Chandler Limited is one of the most respected modern hardware names in our industry. Founder Wade Goeke, with the permission and endorsement of Abbey Road, has reimagined and expanded upon circuits from consoles used at the legendary studio in some of its most creatively and commercially fertile times. The units which comprise Zener-Bender, Zener Limiter and Curve Bender, are based on desks used in the production of The Beatles and Pink Floyd, most notably the 1969 TG12345 and the 1974 TG12413.

Wade’s modern units featured updated and expanded feature sets, and have been used on records like Lemonade and 4 by Beyoncé, Lady Gaga’s Born This Way, Pink Martini by The Strokes, The White Stripes’ Icky Thump, and many more. A partnership with Softube has been slowly cultivated with after-hours beers, conversation, and karaoke at trade shows the world over, paving the way for Softube’s meticulously component-modeled plug-ins.

A new flavor for Console 1

The Zener-Bender brings a fresh new sonic edge to Console 1. Both vintage and surprisingly present, its musicality is perhaps its most notable feature. Both units are created first of all with a mind for making music, and only employing the math that’s required to achieve the results, rather than revelling in tech for tech’s sake.

Unusual components, including germanium and zener diodes, create a sound world not heard in Softube’s other Console 1-ready channel strips, while the architecture of these units emphasize power, punch, clarity, and color. Combining by default with the SSL 4000 E-series shape section, and employing the Zener’s Total Harmonic Distortion (THD) circuit as a drive section, this becomes something very special very quickly.

There is also a native version of the Zener-Bender, for use without Console 1. This option is a collection that includes four plug-ins: Zener-Bender, Zener-Bender For Console 1, and also Curve Bender and Zener Limiter as individual plug-ins. Combining the units into one plug-in channel strip allowed us to add a few workflows not possible in the hardware – External Sidechain input, and Mid/Side Processing.

The anatomy of the Zener-Bender channel strip

The Input section uses Curve Bender’s filters, which are also available in the EQ section, if you set the EQ Type on the Low or High band to Cut.

Rather than imagining a shape section out of thin air, or guessing based on components of the Chandler Limited units, the gate and transient shaper for the Zener-Bender Console 1 channel comes from the SSL SL 4000 E-series strip. It’s a surprisingly powerful workhorse. Use it well and your mixes will raise the roof.

The Curve Bender’s low and high pass filters are applied to the input section, before the Shape, but can be used in the EQ section too by selecting Cut in the high or low bands. The mixing and mastering gain options are all represented, with subtle clicks of half a dB possible as well as bold 15 dB boosts and cuts.

The Ratio knob becomes the curve selector, giving you the choice between the Zener’s Comp 1, Comp 2, and Limit modes. Softube combined the input and output gain functions into a single threshold knob without any compromise on the authenticity of the sound.

The Zener Limiter’s THD circuitry is the basis of the strip’s drive section, bringing meaty distortion where required. The Drive Character parameter controls an optional high-mid emphasis or de-emphasis.