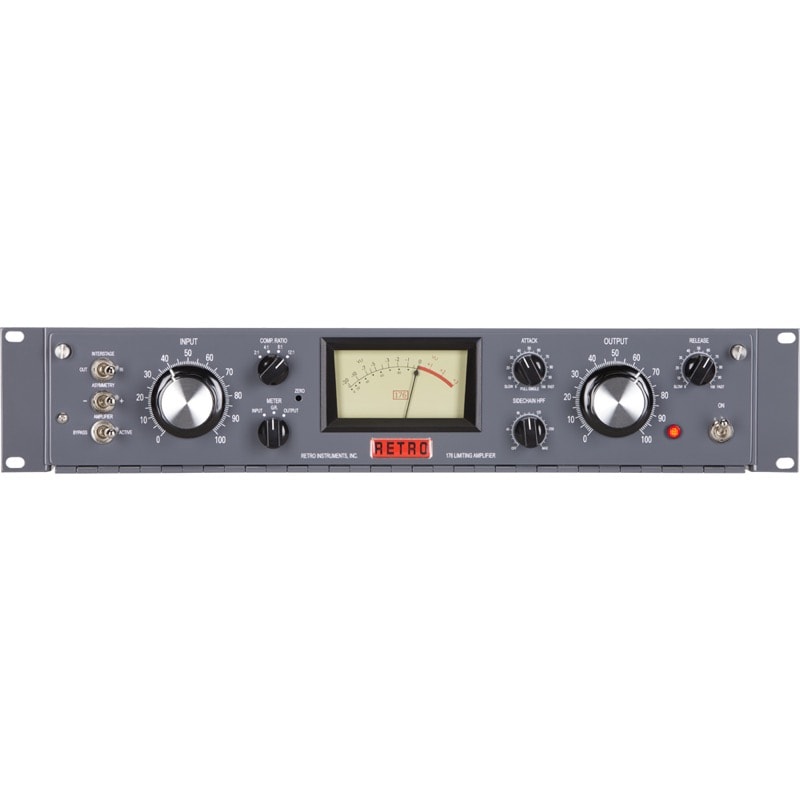 While some pro audio recreations use similar sounding names to the model they emulate, the Retro Instruments 176 limiting amplifier isn’t trying to hide its actual namesake, which is the UA 176 as opposed to its later incarnation, the ubiquitous 1176. Recreating the lush sound of the original Universal Audio 176, the Retro 176 is a true variable-mu limiter that brings modern features, functional convenience, and reliability to the vintage party. Designed for versatility, the Retro 176 enhances dimension, depth, and detail, due to the way tube compression handles dynamics.The Retro 176 is most at home on a main stereo bus, adding glueand gloss to a 2-track master. However, it’s also great for tracking and mixing. More than just for the 2-bus, the Retro 176 puts vocals in velvet cushion of sound like no other compressor, and adds euphonic warmth and fullness to bass, piano, and acoustic guitar, all the while enhancing tone in a way that no EQ can.

With notable users, such as Grammy-winning mixer Chris Lord-Alge and multi-platinum producer, Michael Wagener, the Retro 176 should find its way into the racks of all those who prize lush vocals and a sound that can’t be found anywhere else.

INSIDE THE BOX—Retro Instruments Limiting Amplifier

Like the Fairchild compressor, the original UA 176 used a dual triode tube (the GE 6386) to control gain reduction. Due to the difficulty and expense of obtaining reliable 6386 tubes, Retro employs 6BC8 tubes, which are far more reliable and much less expensive. However, tubes are just one small part of the Retro 176’s allure, which is all about it’s sound. Variable mu compression (mu is a Greek symbol for the amplification factor of a tube) is not as responsive to transients as other compression circuits,but it does add a rich harmonic bed for sound to luxuriate in, and therein lays its charm for overall mix compression and vocals in particular.

One of the unique design features of the Retro 176 is its switchable inter-stage transformer, which separates the gain reduction stage from the amplifier stage. Apart from providing electronic isolation between the two stages and feed to the output stage, it also providesa specific impedance load for the variable gain stage to work into. Alternatively, the inter-stage transformer can bypassed, which changes the tone and character of the compression. Contrary to what you might expect, with the inter-stage transformer switched out of the circuit, the sound of the 176 is thicker and more “round” sounding. Switched in, it appears to add air in the upper frequencies, with a brighter, more open sound.

Like the Teletronix LA-2A, the Retro 176 has a fixed threshold. Gain reduction is adjusted by the Input Level control. The input is optimized for standard +4dBm line levels to provide 0dB to 20dB gain reduction.

However, not to be limited, so to speak, the Retro 176 has extended adjustmentsfor both its attack and release characteristics. Slow Attack lets more impact through. Fast Attack holds down peaks and sounds more stressed. A fast release adds energy and density, andslower settings provide gentle control, retaining more of the dynamics of the source material.

Another feature unique to the Retro 176 is its asymmetry switch, which provides very useful functionality for the detector. The asymmetry switch determines whether the detector reacts full-wave, positive-going half-wave or negative-going half wave. Musical waveforms are very complex, and as such, rarely symmetrical. Particularly in the case of multi-mic recording, the leading edge of an instrument’s waveform can either be positive-going or negative going.On occasion, a wave will spike in one direction and be smooth in the other. When half-wave is selected, the detector only reacts to one side of the waveform, and the asymmetry switch determines which edge of the wave the compression will ride on.

The Sidechain HPF is a very effective tool to eliminate pumping on low frequency material. It allows the compression to work more effectively controlling dynamics in the midrange frequencies. Bass frequencies will pass through with little or no compression, which makes it very useful for bass-heavy music, such as hip-hop, or maintaining punch for kick drum and bass in pop and rock styles, etc. The sidechain high-pass filter is also ideal for vocals.

OUTSIDE THE BOX—Retro Instruments 176 Limiting Amplifier

The front panel of the Retro 176 has the distinctive look and feel of the vintage analog gear of yesteryear, with the addition of precision knob scales for easy recall-ability. Also like its ancestors, the 176 has boat-anchor heft and build quality, with tubes and transformers mounted on the rear panel, which means it should be rackmounted with care and space around the unit. Once mounted, the Retro 176 invites use and will perform flawlessly.

• Power Switch, Indicators and Interlock (upon initial installation, apply power;the red indicator and metershould light and the front door should be securely closed

• Meter-Select Switch (Provides metering of the input and output levels, and gain reduction

In over fivedecade, there hasn’t been a significantly better sounding compressor than the 176. If you’re looking for gear that is truly future-proof, you have to go Retro. For more information, call or chat with your Westlake Pro audio representative today.