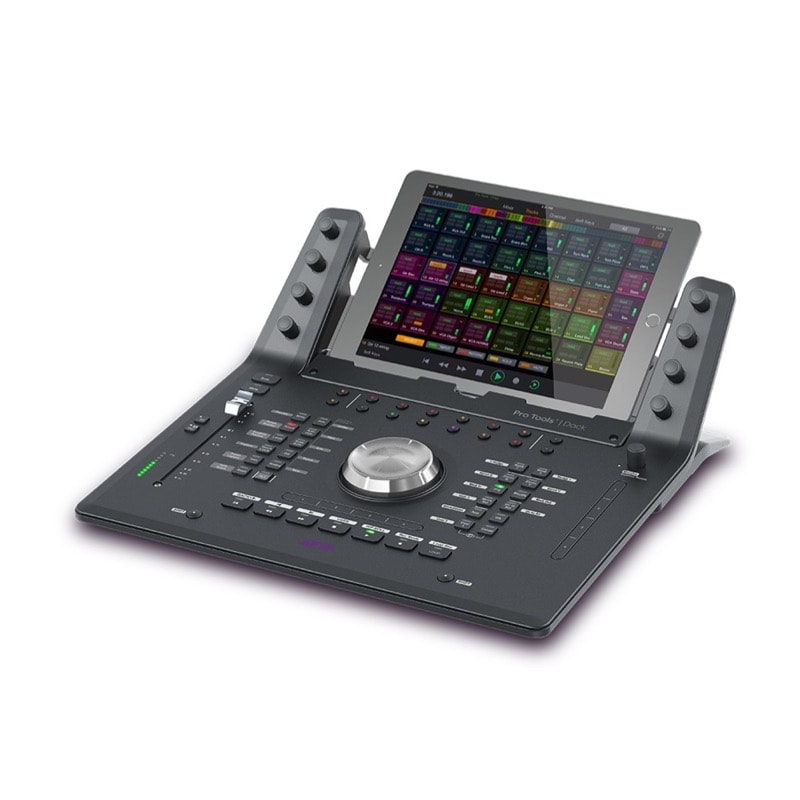 If you’re mixing in Pro Tools or any other EUCON-compatible DAW, the Avid Dock is all you need—and it offers a whole lot more than just one fader. The Avid Pro Tools Dock brings touchscreen/hardware control based on the Avid S6 large-format, modular control surface to DAW users in home and project studios. All it takes is an Apple iPad Air, Avid Dock, and Pro Tools | Control App. Not just for Pro Tools, any EUCON-enabled DAW and video editor software, such as Media Composer, Logic Pro X, Cubase, and Premiere Pro can be controlled by Avid’s Dock.

Mixing is tedious at best with just a keyboard and mouse, while touchscreens alone can be clumsy and incapable of adjusting all parameters, such as dialing in a specific frequency. However, the combination of touchscreen, physical knobs, switches, and motorized fader provides all the facility you need to get around your mix with ease and precision, resulting in faster, better-sounding mixes.

With the Avid Dock, you can work with multiple DAWs simultaneously. The multi-functional versatility of the Dock not only expands the capabilities of the S3 interface/control surface by adding touch, transport, and automation controls, it also prevents you from being locked into a single way of working which increases opportunities for creativity.Together, the Dock and S3 enable you to increase the available services of your studio beyond music to include audio post and video projects, which in turn results in more opportunities, clients, and revenue.

High-End Control without the Sticker Shock

The highly affordable Avid Dock gives you functionality previously found only in the high-end Avid S6 modular control surface—at a fraction of its size and price. With the Dock, you can accelerate your workflow with Soft Key switches, Attention Channel control, and Soft Knob mapping with your iPad running the free Pro Tools | Control app. No other solution offers the same level of tactile control.

One Fader to Rule Them All

The reason previous single-fader solutions didn’t quite catch fire is due to the need to switch back and forth between fader-unit and mouse while using various project window views, ranging from tracks to meters to plug-ins, etc. in the DAW for visual reference. The Dock solves this problem by bringing channel and meter views right to the Dock itself via iPad Air, which slots into the Dock. Not only does the Dock provide the ability to write fader automation, it also has full transport, jog wheel, programmable soft keys, and dedicated hardware controls.

Current DAW controllers are quite formidable, but the Dock combined with an iPad Air takes DAW control to new heights with touchscreen control, plus the ability to “attention” a track, which expands its view, enabling you to access all of its parameters. The image on the iPad screen (above)demonstrates the“Super Channel” view, which is also referred to as the “attentioned” or focus channel. Eight soft knobs on either side of the iPad screen can be used to control parameters such as EQ, Dynamics, Panning, and Sends on the attentioned channel,in much the same way as the S6 Master Touch Module.

Attentioning a track is easily accomplished by touching the track tile on the screen, which brings it to the fader. Another extremely useful feature is the color mapped Soft Keys. The two rows of LED color-coded buttons on the Dock right below the screen change colors and map to the Soft Keys in the smaller view on your iPad, lining up directly underneath the matching button onscreen.

The expanded channel view shows track slider, channel meters, processors and parameters. The screen above shows EQ curve, frequency, gain, and Q (bandwidth). The two rows of buttons at the bottom of the screen match color and line up directly with the LED color-coded buttons on the Dock.

Whether you make music, edit video, or create sound for picture, Pro Tools | Control has something for you. It lets you wirelessly control a variety of audio and video software, including Pro Tools, Media Composer, Logic Pro X, Cubase, and Nuendo. You can even use it to extend your workflow across other Avid control surfaces. All you need is Wi-Fi.

The Tracks view of the Pro Tools | Control app displays an overview of your entire mix, 40 tracks at a time. Not only does Pro Tools | Control display track name and number, it also shows active metering, current input monitor, record, mute, solo status, and a level meter for each track.

Pro Tools | Control is a free download for your iPad Air. To use it with your EUCON-enabled DAW, simply install EuControl software on your computer, launch your audio or video workstation, then tap, swipe, slide, and drag your way through a variety of application functions and parameters—from adjusting levels, pan, and mute settings, to triggering transport controls and automation modes.

If you prefer more faders, as many do, you can combine the Dock with an Avid S3 control surface for a “mini S6” that’s huge on features. It’s almost like two mini-mixer-bots come together to form one giant mixer-bot. When the Dock is paired with Pro Tools | S3, you gain complimentary and enhanced functionality with the dedicated automation switches, transport controls, weighted aluminum jog wheel, color-coded Soft Key switches, and more.

The Pro Tools Dock is a portable, affordable surface that gives audio and music professionals intelligent studio control. Working together with an iPad running the free Pro Tools Control app, it gives users the access, integration, and precision they need to edit and mix projects faster.