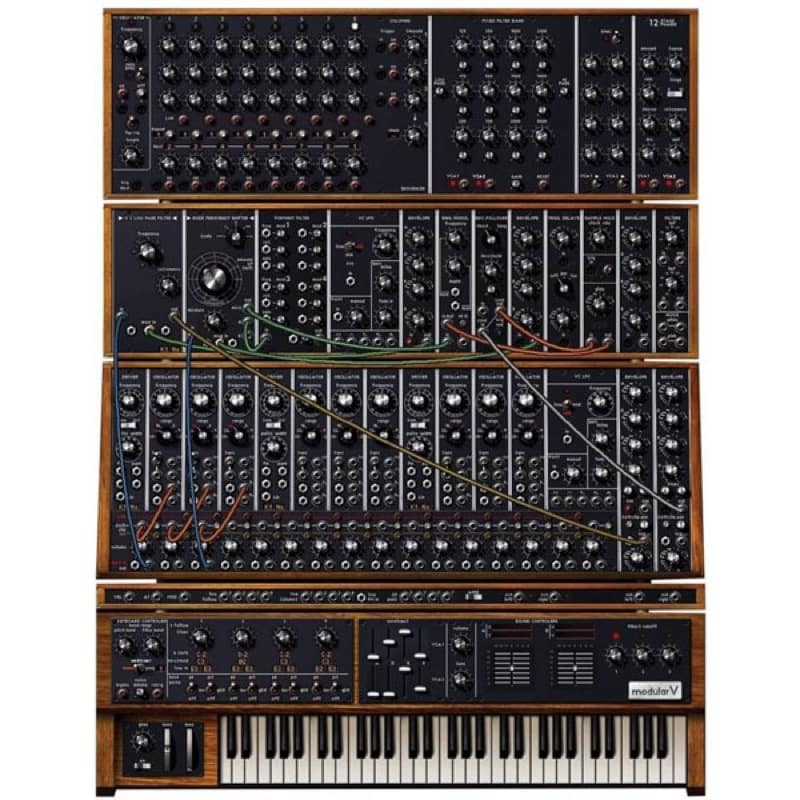 Arturia, in partnership with Bob Moog, has made a faithful reproduction of one of the most famous series of synthesizers: Moog Modular. Whether recreating the abstract tonal qualities of the classic electronic soundtracks, or pushing forward the sonic boundaries of today, the Moog Modular V is the synthesizer of choice for sound exploration, anywhere, anytime. It has all the vibe and the fat sound of the original, cleverly combined with important contemporary features like polyphony, MIDI control, loading and saving of patches.

It was in 1964 that the first prototype of a Moog synthesizer was produced. It was presented at the AES Show (Audio Engineering Society) and immediately generated a huge amount of interest. In 1965 Bob Moog decided to release the 900 series for commercial sale, and in 1967 he made the decision to produce different machines, each with a certain number of modules. This marked the birth of modular systems I, II and III.

“Probably the number one system” (Peter Forrest, The A-Z of Analog Synthesizers), the Moog Modular was soon to be adopted by groups like Tangerine Dream, The Beatles and the Rolling Stones. Stevie Wonder, Klaus Schultze, Isao Tomita and many others including Jean-Michel Jarre and Keith Emerson were also among the users.

More pictures of the original on
the synthmuseum.com website

Because it is modular, the Moog Modular V offers endless possibilities for synthesis.
9 oscillators, 3 filter slots, 2 LFOs, 6 envelopes, VCAs, mixers, triggers, a 3×8 step-sequencer, etc.
With such an instrument, you can make all types of combinations and create sounds that were never heard before.

TAE®, standing for True Analog Emulation, is a new technology developed by Arturia, enabling the digital reproduction of analog circuits. The implementation of TAE in Moog Modular V results in:

One unique scrollable view to overlook the entire synth.
Some of the modules are now interchangeable, allowing to configure – to a certain extent – the Modular the desired way.
New audio possibilities:
Improvements on the oscillators (new free running), on the filters (better response to modulations), on the envelopes (faster and even closer to true analogical behaviour).
New Unison mode
New Audio-In possibilities
The Soft-clipping emulation is now done on each mixer and not systematically on all of them, which saves on CPU load.
New modules
1630 Bode Frequency Shifter. Developed under the Moog license by Harold Bode in 1964, it is extremely rare (a dozen Worldwide).
928 Sample and hold is also very rare. Originally assembled in a separate cabinet, it was adapted on the last modular series, in the late 70’s.
912 Envelope follower (or Schmit Trigger). One of the most popular modules on the Moog systems, it was often added to original configuration to create complex modulation through the use of an output signal.
12 stage phaser. The Moog 12 Stage Phaser was very well known, and originally conceived as an external rack to the Modular systems.
Formant Filter. A new module developed by Arturia, which did not exist on the original Moog systems. It allows the filtering of sounds according to the formants a, e, i, o, u.
Ring Modulator. Also a new module developed by Arturia, it creates very metallic sounds.
New presets
200 new presets to provide optimal use of the new modules.