Since the late 70’s, the synth world has seen an explosion of new technology, from the advent of digital synths like the Yamaha DX7, to the dominance of Digital Recording, and Software Synthesis. Despite this, the past decade has proven that musicians, producers, and sound designers have never lost their love of the classic, warm, and warbly sounds of vintage synthesizers. These early synths embody the sound of futuristic nostalgia, which has easily made them a go-to choice for Sci-Fi and Horror films for decades. From Stranger Things to Blade Runner, Suspiria, Mandy, and the latest addition to the Halloween franchise, the classic synths of the 70’s and 80’s have been the go-to tools used for eerie textures, melancholy memories, and a foreboding sense of dread.

While the sound of these instruments command a dedicated cult following, the hardware itself poses some serious issues for the modern workflow. For starters, let’s look at cost and availability: a Yamaha CS-80 in playable condition will cost you almost $20,000, if you can even find one. If you do, make sure you bring a friend to help lift the ~220lb behemoth, and leave room in your budget for regular repairs and maintenance.

Thankfully, modern software modeling has managed to bring these same sounds to your mix without the need to eat up your budget or studio space! The Arturia V Collection 6 is a comprehensive library of the most beloved keyboards and synthesizers in the history of recorded music. Classic Analog Synthesizers like the Minimoog, ARP2600, Jupiter 8, Prophet 5, CS-80 are modeled to sonic perfection, while the early wave of digital synths like the Fairlight CMI, Synclavier, and DX7 bring their unmistakable charm to the mix. Add on a host of Electric and Acoustic Pianos, Organs, and the Solina String Machine, and you’ve got an arsenal of keyboard-based inspiration that spans generations.

To put the V Collection 6 through its paces, I embraced the Halloween spirit and recreated some of the horror pioneer John Carpenter’s classic soundtracks, utilizing only the Arturia V Collection 6 to recreate the bone-chilling themes of Halloween and The Fog.

Check them out below, then read on to gain insight to which tools were used where:

Both the themes from Halloween and The Fog hinge on their unrelenting piano motifs, and I was pleasantly surprised by the depth, dynamics, and sound design options available in Arturia’s Piano modeling. First, choose a piano type, then go in depth to tweak the dynamics, velocity curve, mechanical noise, tuning, mic placement, and built-in FX. Piano V is a one-stop shop for piano duties, from realistic to out of this world! I found it both easy and fun to coax a huge range of sounds, from polished, pop grand pianos, warm jazzy uprights, and experimental honky-tonk tack-hammer detuned nightmares!

While John Carpenter was most focused on the actual composition, Alan Howarth developed endless sounds from a huge list of synths, with one of his favorites being the Sequential Circuits Prophet 5. I chose the Prophet V as my weapon of choice for bass, lead, and percussion sounds, and it performed each duty with aplomb. Basses were thick, rich, and convincing, with gorgeous ethereal warbles from the Unison Mode and the built-in Chorus effect. 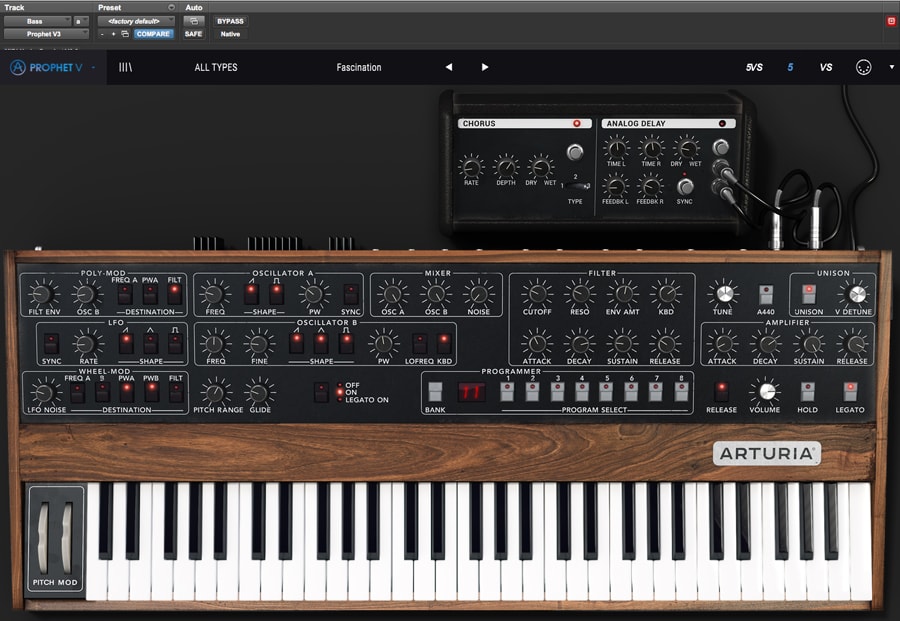 True to John Carpenter’s workflow, I doubled up the lead parts, varying the sound and performance to get a rich sound, with the Prophet V easily covering plucky resonant stabs and smooth pads with ease. The wide range of the oscillators, flexible modulation, and noise generator came in handy for the iconic, atonal “high-hat” from the Halloween theme, while performing equally well for the percussive pulse in the theme from The Fog.

For the opening chords in The Fog, I layered to instances of the Farfisa V to nail the top-heavy sounds of the transistor organ. I was surprised to find a wealth of deep tone sculpting controls just underneath the simple front panel which allowed for spooky detuned chords, while the included stomp-box FX offered gorgeous movement and texture.

For more dramatic effects like the thunderclaps and mysterious screeches from The Fog, I turned to the SEM V, whose legendary 12db/oct multimode filter gave each sound a unique timbre. The added features like the white noise generator and onboard effects were a huge benefit for more creative sound design duties, bringing new sonic opportunities to the classic filter and interface. I couldn’t help myself from using the onboard overdrive function to beef-up the persistent kick drum in the Halloween theme, making it more akin to the newly released Halloween film (also scored by Carpenter, with help from his son Cody and friend Daniel Davies) than the original.

The last layer to be added was the strings in the Halloween score. Loading up the Solina V, I was immediately treated to the lush sounds of synthesized strings heard on countless classic records. The simple front panel offered plenty of sound sculpting, but once again, entire worlds of sound can easily be accessed by opening the top panel. While the simple panel offers impressive control over your sound, but by far the best part of the Solina V is that it’s all sweet spot. With many modern synths, the number of sonic options is often a double-edged sword. On one hand, you can get just about any sound possible from a single synth, but the price paid is the time it takes to get simple patches to get the sweet, rich sounds of older instruments. This is not the case with the Solina, which despite the sonic limitations, is instantly inspiring and almost impossible to make it sound bad.

All in all, the Arturia V Collection 6 is an impressive bundle of virtual instruments that offers all the sounds you’d expect from these vintage classics while adding enough new functionality to bring each instrument into a modern workflow. The key word here is instrument, as each plug-in offers a friendly and immediate interface with enough depth to craft your perfect sound without scrolling through dozens of menus. When menus do come into play, the layout is streamlined and efficient, allowing you to quickly browse through presets, patches, sounds, and instruments without getting in the way of the creative process.

Let’s face it, the sounds featured in the V Collection have become part of recording history, from the top of the charts to the silver screen. While collecting original vintage instruments is a romantic notion, it’s more closely related to collecting fine art or furniture than making music. Not only would collecting all the instruments offered here be prohibitively expensive for all but the 0.1% of producers, they would require regular extensive repairs and a large studio just to house. Top it off with the workflow limitations, lack of MIDI, presets, and more, it becomes clear why many of the people that can use any instruments they want often end up reaching for software versions like those in the V Collection. John Carpenter himself has expressed a love for soft-synths and digital recording, having listed the instruments in the Arturia V Collection as part of his arsenal when writing music these days.

To me, the ability to pull up any of these classic sounds in an instant at a fraction of the cost of most entry-level hardware synthesizers is a no-brainer. Don’t get me wrong, I love hardware synths and I love vintage gear, mainly for the immediacy gained from a physical interface. To my surprise, each of the instruments in the V Collection feels just as immediate when paired with a quality MIDI controller, allowing me to get lost in the spooky synth sounds of yesteryear without abandoning the workflow enhancements of a DAW.

Call your Westlake Pro Sales Consultant TODAY to get your hands on the Arturia V Collection 6 to explore the seminal sounds of Sci-Fi and Horror!

Have scary sounds of your own? Share your favorite horror synths, songs and plug-ins with us in the comments!