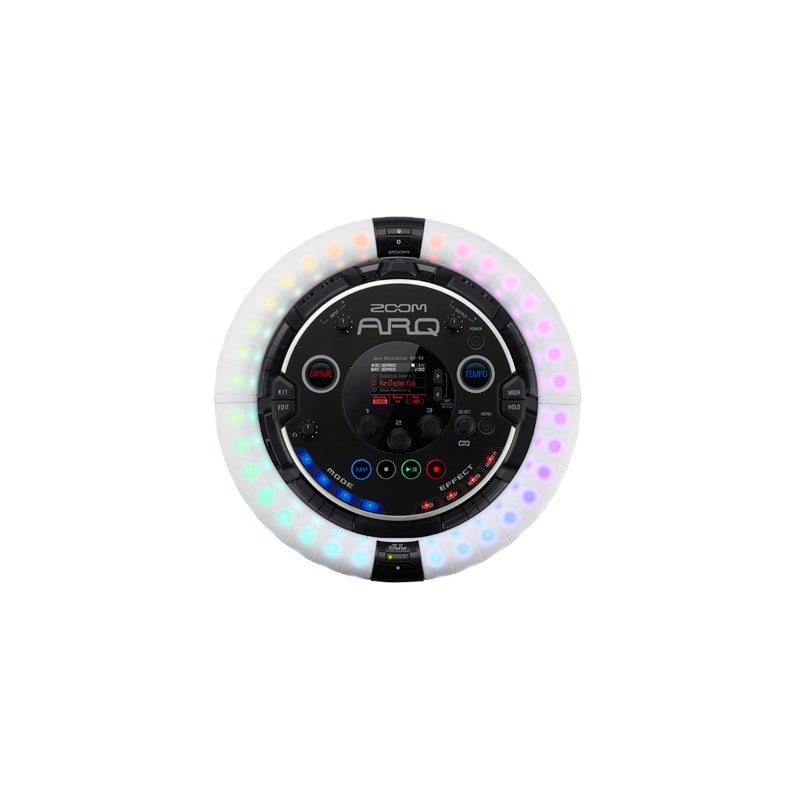 “Music is a voyage of discovery. One that now goes much further with the creation of the ZOOM ARQ Aero RhythmTrak.

The ZOOM ARQ Aero RhythmTrak is an all-in-one production and live performance instrument which includes an integrated drum machine, sequencer, synthesizer, looper, and MIDI controller with a built-in accelerometer. Even more, ARQ is freedom. With its wireless Bluetooth® Ring Controller, you can escape the booth, move the music, and get in front of the crowd.

Base Station and Ring Controller

The ARQ consists of two powerful components — the Base Station (AR-96) and the detachable Ring Controller (AR-96c).

The ARQ Base Station houses 468 drum and instrument sounds, a powerful sound engine that provides 70 “”one-shot”” sampled waveform sounds, an onboard synthesizer, and dozens of digital effects. Dual 1/4″” line-level audio inputs enable phrase recording and looping. There are also stereo 1/4″” line-level outputs, as well as a dedicated 1/4″” headphone jack with its own volume control. A USB port allows connection to your computer, and an SD card slot lets you save patterns and loops, import prerecorded audio, and update firmware.

The detachable Ring Controller communicates with the Base Station, as well as DAWs, via wireless Bluetooth. It offers 96 velocity- and pressure-sensitive pads for clip launching and playing drum sounds, instrument sounds, and sequences. Phrases and sounds can be played chromatically, or you can choose from dozens of preset scales in any key. Its unique Grip Detection automatically prevents accidental triggering of the pads under your hand. There are dedicated buttons at the top and bottom of the Ring for REC/PLAY/STOP, as well as Filter/Delay/Reverb/MASTER FX on/off. An onboard 3-axis accelerometer generates MIDI control messages to alter sounds and effects in real time. Its internal Lithium-Ion battery automatically charges when the Ring is placed on the Base Station.

The Only Drum Machine for Performers

Not only does ARQ allow you to create incredible drum parts and patterns, you can also use the Ring Controller as a live instrument. Play it while mounted to the Base Station, or remove it to take your performance to the front of the stage. ARQ comes with a multitude of editable PCM drum and instrument sounds organized into 79 genre-specific kits, and you can also develop 20 kits of your own, complete with effects. Once you perform with ARQ, you’ll never use another drum machine again.

Traditional devices take a linear approach to sequencing, but ARQ is anything but traditional. For the first time, you can visualize your music as a true loop, up to 5 parts at a time.

Individual patterns or complete songs can be constructed one step at a time or by re-cording a real-time performance, with an onboard mixer for setting volumes, muting, and soloing. Instruments can be assigned to single or multiple pads and up to 3 parts can be created at a time. Up to 33 parts can be played back simultaneously, and the timbre or note of each part can be changed with the touch of a button. 384 patterns can be combined in any order to form a complete song, then flattened into an audio loop that can be played back from a single pad—all without the use of a computer.

ARQ’s powerful sound engine offers 70 preset “”one-shot”” sounds—sampled waveforms that can be pitch-shifted as they are played over multiple pads—as well as an onboard synthesizer that allows you to build completely original timbres. Choose from 531 different oscillator types for sonic variety, then add digital effects such as filtering, delay, and reverb, along with sound-shaping controls like envelope generators and stepped or smooth modulation.

ARQ allows you to create completely original loops from onboard sounds or patterns, or by capturing external audio. Set start and end points, change the pitch if desired, choose between forward or reverse playback, then assign each loop to a different con-troller pad. Up to 16 loops can be played simultaneously and synchronized to the same tempo. ARQ makes creating loops a lot more fun.

Its a Wireless MIDI Controller

Use the Ring for wireless control of all your MIDI instruments and devices connected to your computer—samplers, synths, and drum machines, as well as MIDI-enabled effects processors. Its 96 pads are velocity-sensitive and can also send aftertouch (MIDI mes-sages generated based on the pressure applied to the pads once they are being held down).

The Ring’s onboard 3-axis accelerometer can be used to change sounds and effects in real time. Wave and tilt it to alter onboard effects parameters and to generate MIDI con-trol messages. You can even link it to your digital mixing console and use the accelero-meter to fly sounds around the room. ARQ utilizes wireless Bluetooth LE for low power consumption, giving you lots of performance time between battery charges.

Break Out. Break Free. Break Away.

Take your performance to places you’ve never been before. Express yourself and get closer to your audience. Open up a world of new options for music production. Create in ways that were simply not possible until now.

The Zoom ARQ—see how instrumental an instrument can be.

Features At A Glance