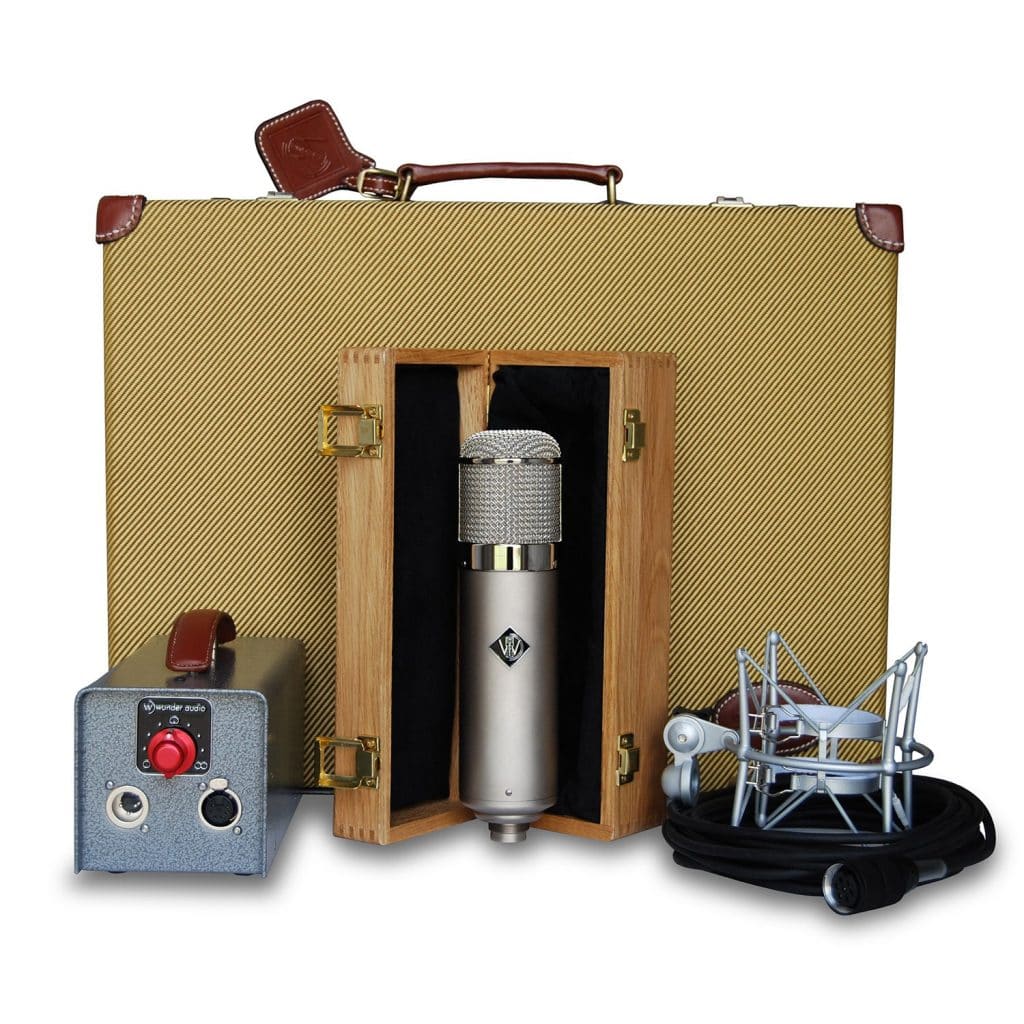 The Wunder CM7 G (Glass Tube Switchable) Suprema With K47 Capsule is the latest evolution of the CM7-GTS. This mic is true to a vintage U47 with a modern upgrade, Wunder has engineered a switchable cardioid mode relay on the inside of the mic instead of on the outside of the grille. This mode produces a smoother more full-bodied sound. The pattern switch is still on the PSU, but the actual switch point in the circuit is directly below the capsule compartment. At the same time, it retains the eight different polar patterns found in a vintage M49, so it is like having two mics in one!

The Wunder Audio CM7 GS Grille is true to vintage with three gauges of grill mesh at the head grille: an outer large mesh, an inner medium mesh, and a fine mesh that is sandwiched in between. It has acoustic interplay with the capsule, having the electronic properties of a faraday cage.This proper vintage mesh gauge is not the readily available metric gauge and is vastly important for the legendary sound of a U47.

The CM7 GS Suprema Microphone can be ordered either with K47 or M7 Capsule.

The diaphragm is stretched and glued to the rim, akin to how a snare drum head is stretched over a rim and never screwed to the backplate. The backplate is brass and precision milled by hand in Switzerland to the original rim height 15/10000th inch specification within one-micron tolerance. (1 Micron = 0.0000393701 inch) A modern upgrade to the original M7’s which had up to 0002” tolerance and explains why some brand new U47’s back in the 1950’s sounded better than others.

It has three mounting isolation rims, true to the vintage Berlin M7 and a modern upgrade to the Gefell M7 which has only two; having three rims provides an improved isolation of the ground. the capsules then sent to Germany, where they have perfected the craft of skinning them in gold.

The CM7 G Suprema includes a new old stock Telefunken 800 series tube. This tube is modern glass derivative of the VF14M used in the vintage U47. It uses the same system construction but in a package that is less likely to get microphonic.

The transformer inside the CM7 G Suprema is a historic recreation of the early transformers used in the exceedingly rare early “Large Badge” U47s. It contains the exact vintage Mu-Metal as these early Berlin U47 transformers and are wound to the original Braunbuch specifications using NOS (new old stock) laminations. The most important difference in the first several hundred “Large Badge” U47’s was that the transformer bobbin was a full 1/8” larger than the later version of the U47 transformer. The CM7 G Suprema transformer incorporates these highly desired larger bobbin specs.

Wunder has replaced the problematic PVC wire insulation of the original U47 in the CM7 GS, upgrading it to Teflon to ensure 100% reliability Over the decades, the original U47 transformers will begin to decay. The clear PVC coating that was used as an insulation between the layers of the Mu-Metal laminations rubs off by the transformer mounting screws and fuses the lamination layers together causing changes in the lows and high frequencies. Additionally PVC was used as insulation on the hookup wire emanating from the bobbin and this PVC eventually flakes off the wire causing irrevocable damage to the bobbin windings. Aging and decay of the transformer and 30 other components in a 66-year-old vintage U47 microphone is the reason for the undesirable sound in many of the older mics.

Wunder has optimized the passive components to achieve a true audiophile performance. While audiophile equipment is usually referred to at the end of the chain in recording, they feel that it is most important that the first link in the recording chain, the microphone, be the best attainable. To be able to listen to the best possible recording, you must be able to record the source with minimal amounts of noise and distortion and be able to accurately capture every nuance of the sound. Wunder has enhanced the true to vintage microphones by utilizing the Suprema Silver Gold Oil capacitor which is the highest quality capacitor available today. More importantly, sonically the CM7 GS capacitor stands out due to its wonderful natural singing and exceptional micro dynamic. Capacitance: 1uF; Dielectric: Polypropylene Metallization 99.99% silver, 1% gold; Purity of silver: min. 99.97% typ. 99.99%; Purity of gold: min. 99.97% typ. 99.99%”.

The new generation tube Microphone PSU is proprietary to Wunder Audio and is an upgrade from the vintage tube mic PSU’s used for the 1960’s era Neumann design. the upgrade gets a clean and stable DC voltage to the mic and shields the influx of Wi-Fi and RF interference with 100 percent reliability. Wunder has engineered the PSU to the equivalent of the technology incorporated in top tier audiophile systems, using a duel-pole neutral-fusing design. The PSU can be plugged into any voltage in the world without having to jumper a voltage setting switch.

Inside, Wunder has incorporated extremely accurate 30 turn trim pots so they are able to fine-tune all of the voltages. Most other power supply designs either do not have a voltage trim or use a single turn pot, which is susceptible to drifting. For the most reliable pattern switching, the CM7 GS PSU uses a military spec Grayhill switch.

Your Wunder Audio CM7 GS is nestled in velvet and softly secured in place in a foam-lined quarter sawn oak box that is clasped and hinged. This box then is safely incased in a precision velvet-lined thick foam tweed case that also holds your PSU, your shock mount, and your cables. The tweed carrying case is a work of art in itself; it uses the same Fender tweed found in a vintage fender guitar case which amplifies the vintage period of the vintage-style CM7 GS microphone, and it is trimmed with top grain leather and fine stitching. The CM7 GS case has a strong leather handle and combination lock to keep your mic secure. This case can be sold separately.