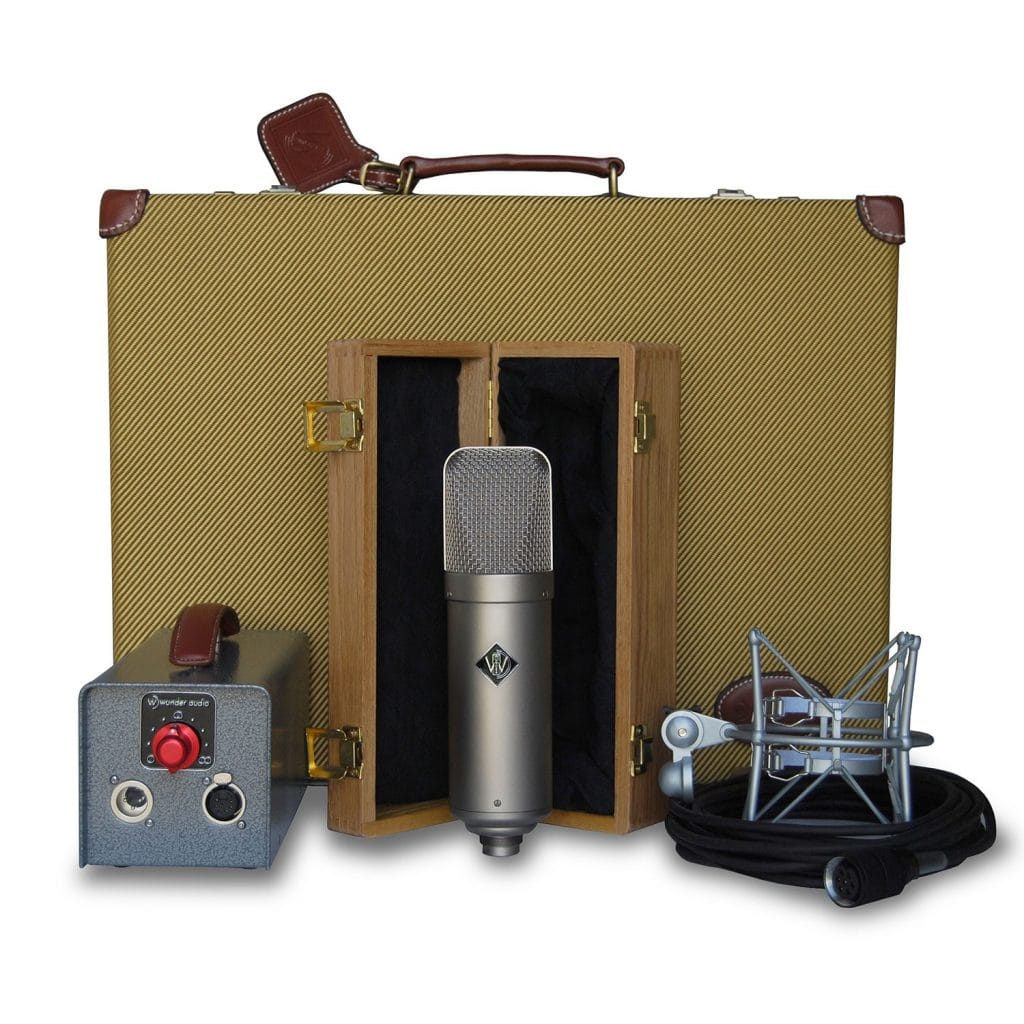 The Wunder Audio CM67 S is an exceptional microphone for vocals when a smoother sound is desired. The original U67 is prized for its warmth, this is also true for the Wunder Audio CM67 S. It is also excellent for drums (toms, snare, overheads), acoustic guitar and electric guitar. The CM67 S is a serious pro-studio workhorse because it has a very nice top and bottom end, and brings out a natural sound from any source. This mic is true to a vintage U67 with a modern upgrade, Wunder has engineered a switchable cardioid mode relay on the inside of the mic instead of on the outside of the grille. This mode produces a smoother more full-bodied sound. The pattern switch is still on the PSU, but the actual switch point in the circuit is directly below the capsule compartment. At the same time, it retains the eight different polar patterns found in a vintage M49, so it is like having two mics in one!

The K67 capsule in the CM67 S includes a two-piece back plate, allowing both diaphragms to be tuned individually and then matched for equivalent response. There were 6 different versions of the original Neumann K67 capsule. The earlier versions, circa 1960-66, had either brass or fiber diaphragm rings and the later versions, 1966 onwards, were made with white plastic diaphragm rings and these later rings were actually better at isolating the diaphragm from the backplate ground.

Wunder took this approach one step further with a modern upgrade by utilizing a white porcelain ringed K67 in the capsule. the porcelain has low permeability and elasticity, considerable strength, hardness, resonance, and a high resistance to chemical attack and thermal shock, improving on the white plastic rings used on the original K67; which were prone to discoloring, becoming soaked with impurities over the years and affected its electrical resistance thus creating noise.

The CM67 Suprema gives you a choice of one of two new old stock EF86 tubes that are excellent in this mic, both are fantastic and both are unique in their own way:

The transformer in the CM67 Suprema is true to vintage and is somewhat unique. It makes use of an elaborate feedback network known as a tertiary winding, which creates negative feedback through the capsule to the tube for High Frequency de-emphasis. It creates a roll-off in the HF response in order to compensate for the natural HF peak due to the original design of the K67 capsule. It takes a very special transformer to accomplish this task while simultaneously achieving such an impressive sound.

Some U67 recreations have a quick fix to simulate the sound of the original, but most of the modifications that attenuate the top end achieve a less than desirable result. This is not exactly a good trade-off.

Wonder has optimized the passive components to achieve a true audiophile performance. While audiophile equipment is usually referred to at the end of the chain in recording, Wunder feels that it is most important that the first link in the recording chain, the microphone, be the best attainable. To be able to listen to the best possible recording, you must be able to record the source with minimal amounts of noise and distortion and be able to accurately capture every nuance of the sound. Wunder has enhanced the true to vintage microphones by utilizing the Suprema Silver Gold Oil capacitor which is the highest quality capacitor available today. More importantly, sonically the CM67 S capacitor stands out due to its wonderful natural singing and exceptional micro dynamic. Capacitance: 1uF; Dielectric: Polypropylene Metallization 99.99% silver, 1% gold; Purity of silver: min. 99.97% typ. 99.99%; Purity of gold: min. 99.97% typ. 99.99%”.

The new generation tube Microphone PSU is proprietary to Wunder Audio and is an upgrade from the vintage tube mic PSU’s used for the 1960’s era Neumann design. the upgrade gets a clean and stable DC voltage to the mic and shields the influx of Wi-Fi and RF interference with 100 percent reliability.

Wunder has engineered the PSU to the equivalent of the technology incorporated in top tier audiophile systems, using a duel-pole neutral-fusing design. The PSU can be plugged into any voltage in the world without having to jumper a voltage setting switch.

Inside, Wunder has incorporated extremely accurate 30 turn trim pots so they are able to fine-tune all of the voltages. Most other power supply designs either do not have a voltage trim or use a single turn pot, which is susceptible to drifting. For the most reliable pattern switching, the CM67 S PSU uses a military spec Grayhill switch.

Your Wunder Audio CM67 S is nestled in velvet and softly secured in place in a foam-lined quarter sawn oak box that is clasped and hinged. This box then is safely incased in a precision velvet-lined thick foam tweed case that also holds your PSU, your shock mount, and your cables. The tweed carrying case is a work of art in itself; it uses the same Fender tweed found in a vintage fender guitar case which amplifies the vintage period of the vintage-style CM67 S microphone, and it is trimmed with top grain leather and fine stitching. The CM67 S case has a strong leather handle and combination lock to keep your mic secure. This case can be sold separately.