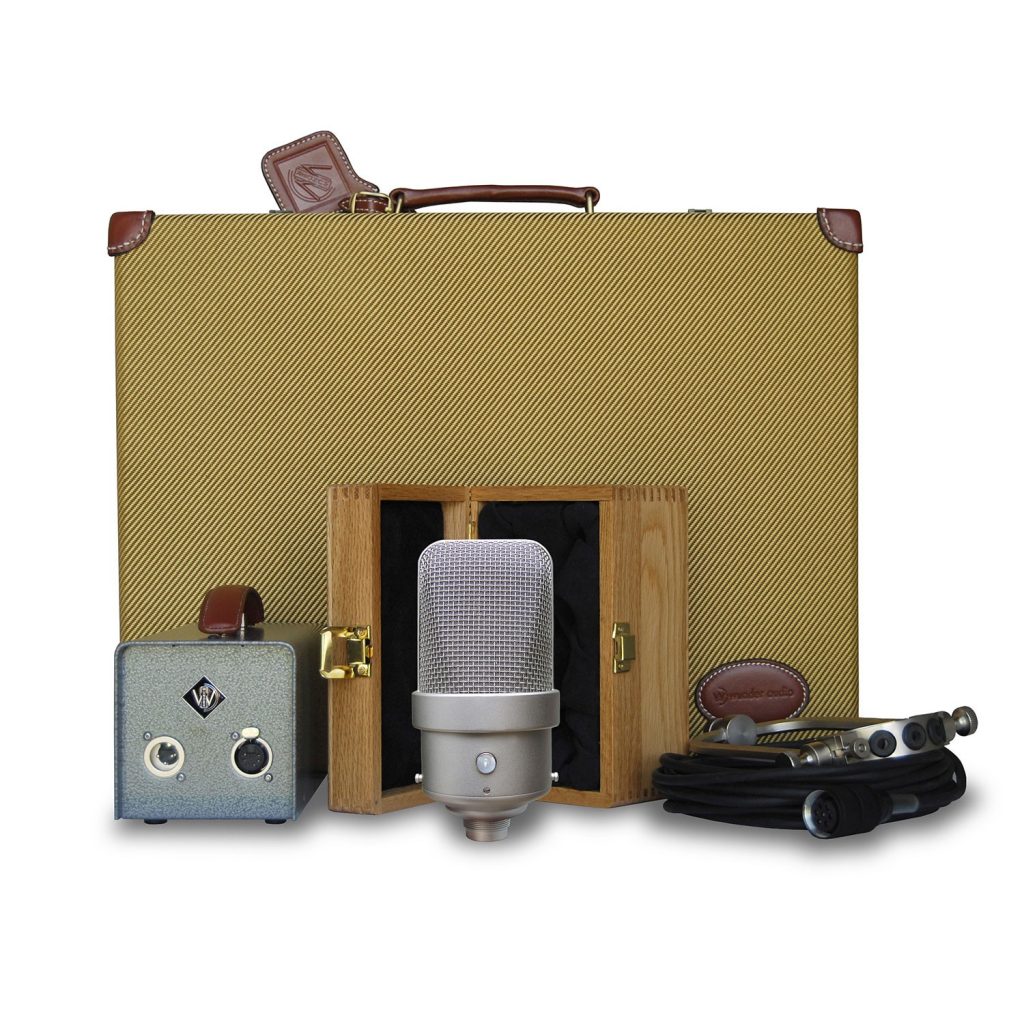 The Wunder Audio CM50 Suprema tube microphone is true to vintage using an original Neumann style M50 spherical capsule. The Wunder Audio CM50 S has an incredible lineage; its predecessor, the CM50, has been used worldwide in Decca trees for recording the soundtracks for many of the major motion pictures produced today. The Wunder Audio CM50 version is widely used by scoring engineer Shawn Murphy and Tom Steel amongst others at most of the sound stages in Los Angeles including; the Newman Scoring Stage 20th Century Fox, Sony Scoring Stage, Culver City, Newman Scoring Stage for both movies and television. It is favorite of Glee and The Glee Project and other top scoring stages worldwide, including Abbey road! Main left-right usage of the CM50 include: Star Wars: Episode VII – The Force Awakens, the Hobbit film series, Harry Potter and Marvel films. The new CM50 Suprema is one step up from this already perfect mic.

The CM50 S is the best available microphone for orchestral recordings because it has a response that rises slightly and it becomes increasingly more directional at higher frequencies when exposed to direct sound, but it remains flat in a diffused sound field.

In addition to being the perfect microphone for soundtrack recordings, the CM50 Suprema is definitely an important mic when recording drums and capturing the room sound, giving the instrument volume and depth. Once you try this out on drums, you will never want to record without it, as the drums sound flat without the CM50 Suprema.

The CM50 S has a slanted grille to limit the effect of grille resonance on the response. Because the grille is slanted and presents a continuously varying profile to the capsule, there are fewer standing waves generated. This gives the most natural sound obtainable my any microphone. Very pure and pleasantly warm. The size of the grille forms a larger-volume enclosure giving the capsule more breathing room and contributing to its openness.

In every way the Wunder Audio CM50 Suprema grille is true to vintage and identical to the original M50. It has been used as historical replacement parts on the vintage M50s.

Wunder Audio CM50 S uses and original MSC2, which is the preferred tube and an upgrade from the ultra-miniature AC701 that eventually replaced this fine tube in the original M49s due to the demands of the German Broadcasting industry. The original Telefunken GmbH German based company, which no longer exists, made a high-end version of the MSC2, Wunder Audio has secured a supply of the this version which was a superior grade and was originally designed for military use.

The CM50 Suprema uses the same M9 capsule as the historic M50. Neumann went through several materials for their diaphragm, starting with PVC which quickly became too brittle, then went to aluminum which was difficult to tension correctly. For a brief period nickel was used and finally the decision was to use Mylar, as in the KM 83. Wunder have successfully recreated the small pressure transducer, similar to the capsule for the KM series microphones, embedded in the surface of a 40 mm diameter Lucite sphere. By mounting the miniature capsule in the large Lucite sphere all standing waves larger than 40 mm are eliminated thus canceling out proximity effect. No other microphone set to Omni can achieve the naturalness of the CM50 S sound. The inspiration is classic, the execution is cutting-edge.

The Wunder Audio CM50 Suprema uses a M250 style seven-pin Tuchel connector, introduced by Neumann in 1961, that screws on and holds tighter than a eight-pin bayonet Tuchel connector, improving its performance with superior EMI/RF rejection.

The new generation tube Microphone PSU is proprietary to Wunder Audio and is an upgrade from the vintage tube mic PSU’s used for the 1960’s era Neumann design. the upgrade gets a clean and stable DC voltage to the mic and shields the influx of Wi-Fi and RF interference with 100 percent reliability. Wunder has engineered the PSU to the equivalent of the technology incorporated in top tier audiophile systems, using a duel-pole neutral-fusing design. The PSU can be plugged into any voltage in the world without having to jumper a voltage setting switch. Inside, Wunder has incorporated extremely accurate 30 turn trim pots so Wunder are able to fine-tune all of the voltages. Most other power supply designs either do not have a voltage trim or use a single turn pot, which is susceptible to drifting.

Your Wunder Audio CM50 S is nestled in velvet and softly secured in place in a foam-lined quarter sawn oak box that is clasped and hinged. This box then is safely incased in a precision velvet-lined thick foam tweed case that also holds your PSU, your one-piece newly designed yoke mount, and your cables. The tweed carrying case is a work of art in itself; it uses the same Fender tweed found in a vintage fender guitar case which amplifies the vintage period of the vintage-style CM50 S microphone, and it is trimmed with top grain leather and fine stitching. The CM50 S case has a strong leather handle and combination lock to keep your mic secure. This case can be sold separately.