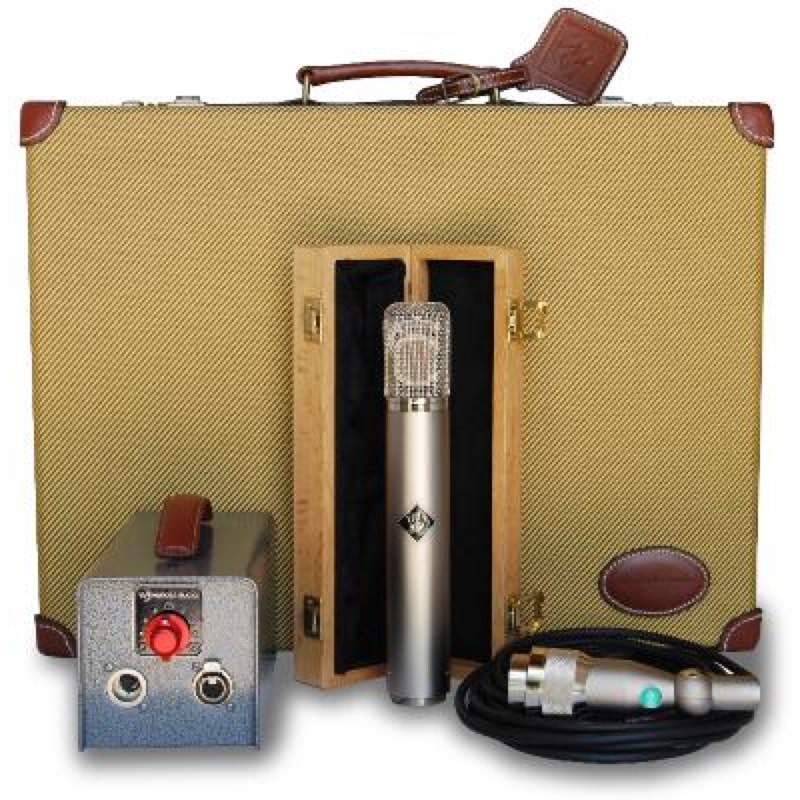 The Wunder Audio CM12 Suprema Multi-Pattern Tube Microphone is a historic replica of the renowned AKG C12 vintage tube microphone, featuring capability of producing 9 different polar patterns. The CM12 S includes a CK12 capsule, a Hiller T14/1 transformer and a 6072a vacuum tube, all built to original specifications and true to the vintage C12. The CM12 S is designed to reproduce an audio signal with the detail, clarity and character of the original C12.

The C12, AKG’s best-known tube condenser, is regarded by many as one of the finest microphones ever made and the CM12 S lives up to this notion with its principal sound creating components: the capsule, the transformer, the tube, the grille size and the screen mesh.

Some of the most important sound capturing components of the CM12 S is the grille size and screen mesh. the CM12 S grille, as well as all the mechanical components in the CM12 S are true to the vintage mic and are made to the exact specs as the original C12, down to the smallest of machine marks. The grille is made like a piece of fine jewelry, as it is hand brazed, polished, and bright nickel-plated. The grille’s open mesh captures the ears of those who were spoilt by the luminescence and transparency of the original C12.

The Wunder Audio CM12 Suprema employs a true to vintage CK12 capsule with 6-micron Mylar. It is a side-address, large-diaphragm design based on AKG’s CK12 capsule. The CK12 dual membrane, dual backplate capsule was first introduced in 1951 as AKG developed this completely new type of complex backplate. It is a 1″ membrane that is fully metalized. This freely vibrating membrane will have a lower LF cutoff than any center fixed membrane like the KK47 or KK67. The CK12 also has a unique system of dual, asymmetrical, separated resonant backplates (each backplate is itself a resonant chamber), which is what gives it a very flat midrange and 10-12 kHz peak. The original CK12 capsule is widely considered to be one of the finest condenser microphone capsules in history.

In 1953, an Austrian company, AKG revealed the now-legendary CK12 microphone capsule, and became one of the two dominant forces in the manufacture of commercial condenser microphones. This new capsule became be the basis of their bestselling AKG C12 microphone.

The CM12 Suprema uses a period correct Hiller T14/1 transformer wound to the Braunbuch specification, using laminations made from the identical nickel alloy mixture as used in the historic Hiller T14 transformer.

The GE 5 Star 6072A is one of the finest 6072 tubes ever made. In fact, the GE 5 Star 6072A’s are the only 6072 (12AY7 variant) tubes recommended in high-end applications. The primary special purpose of a 6072 is its super low noise and microphonics. That is why these tubes are important in microphones and first stages of high-end audio equipment. These special purpose dual triode tubes are equipped with spiral wound heater filaments to eliminate hum and have to pass rigorous screening for noise levels.

The new generation tube Microphone PSU is proprietary to Wunder Audio and is an upgrade from the vintage tube mic PSU’s used for the 1960’s era Neumann design. the upgrade gets a clean and stable DC voltage to the mic and shields the influx of Wi-Fi and RF interference with 100 percent reliability.

Wunder has engineered the PSU to the equivalent of the technology incorporated in top tier audiophile systems, using a duel-pole neutral-fusing design. The PSU can be plugged into any voltage in the world without having to jumper a voltage setting switch.

Your Wunder Audio CM12 S is nestled in velvet and softly secured in place in a foam-lined quarter sawn oak box that is clasped and hinged. This box then is safely incased in a precision velvet-lined thick foam tweed case that also holds your PSU, your swivel mount, and your cables. The tweed carrying case is a work of art in itself; it uses the same Fender tweed found in a vintage fender guitar case which amplifies the vintage period of the vintage-style CM12 S microphone, and it is trimmed with top grain leather and fine stitching. The CM12 S case has a strong leather handle and combination lock to keep your mic secure. This case can be sold separately.