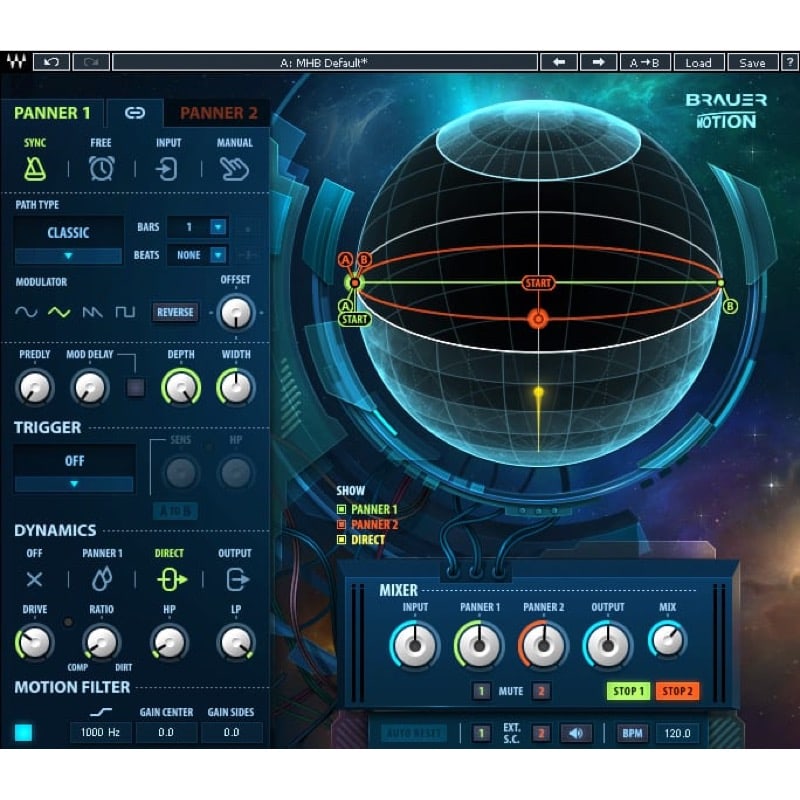 Multiple Grammy-winner Michael Brauer’s innovative use of multi-bus compression, tends to overshadow his expertise in adding emotionally charged movement to a mix. So when Brauer teamed up with Waves to create a motion plug-in, the results, like Brauer’s mixes, were nothing short of stellar.  The Waves Brauer Motion Spherical Autopanner lets you control the movement of  sounds unlike any other plug-in. With two coincident panners, one classic left/right, the other spherical, it offers four panning modes, including Brauer’s own “X Lights,” which make sounds pulse like railroad crossing lights, which were the source of Brauer’s inspiration. The Waves Brauer Motion Spherical Autopanner also provides five trigger modes, control of speed, width, and depth, as well as the ablity to add direct sound and distortion.

Michael Brauer, widely known for the depth of his mixes on artists such as Coldplay, John Mayer, Hall & Oates, Bob Dylan, My Morning Jacket, Aretha Franklin, and numerous others, teamed up with Waves to give mixers everywhere, an intuitive way to create with a single plug-in what used to take racks of outboard gear and a lot of patience. Brauer Motion pans, spins, and bounces mono or stereo signals in or around a visual sphere that lets you both control and see what the sound is doing. It provides various methods of movement, path ranges, and types. Brauer Motion is particularly effective on rhythmic instruments, pads, organs, or strings.

This amazingly versatile and creativity-inspiring plug-in offers four different panning modes to direct the motion of the sound. It has five trigger modes for a variety of on/off options; two panners with full control; a dynamics section; pre-delay, motion filter, and precise control over the speed, width and depth; and a master section with gain and wet/dry controls.

Brauer Motion can be used to create effects that enhance a performance or to draw focus and clarity to an instrument that’s otherwise lost in the mix. It can be used as an insert on any type of track or on an aux return. There are numerous ways to use Brauer Motion. For example, you can pan the two sides of a stereo signal in a mirrored fashion, between their natural positions and the center; use rhythmic panning to enhance the performance of an instrument or vocal; create a earth-moon system with the dry signal in the center and a heavily processed signal orbiting around it; or as means of emphasizing tracks or instruments in a mix.

Emphasize tracks in a mix

Waves Brauer Motion can move instruments subtly or dramatically to change its relation to other parts of the mix, which can unmask and reveal them without losing headroom due to increasing level (which in turn could mask other instruments). Other means of emphasizing tracks include using the sidechain to control the panning motion of an instrument or voice; spin and move  rhythmic tracks while others remain steady, or move backing vocals around the sides of a mix while clearing up the center image to make space for the lead vocal.

Use Brauer Motion to create movement and interest in your mixes without complicated chains of panners, delays, or pitch shifters. Order yours today. For more information, call or chat with your Westlake Pro sales consultant today.