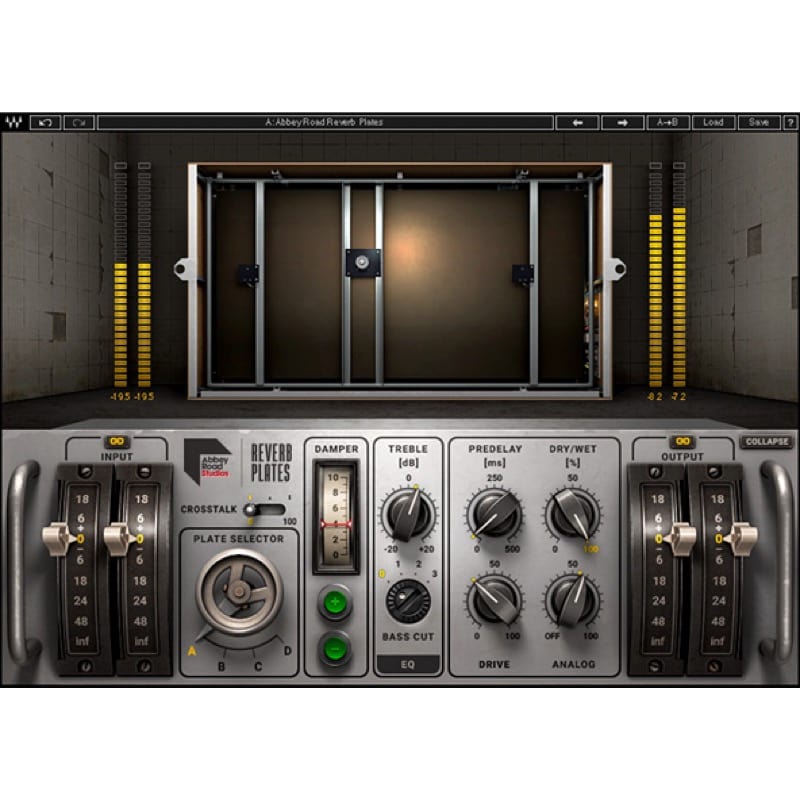 State-of-the-art modeling of the four legendary EMT 140 reverb plates housed at Abbey Road Studios and used on recordings by the Beatles and Pink Floyd.

Introduced in the 1950s, plate reverbs have been a fixture of recorded music ever since. Used most prominently in the ‘60s and ‘70s by pioneering bands, including the Beatles and Pink Floyd, Abbey Road Studios’ original reverb plates – four EMT 140 units – were first installed in 1957 to complement the fixed reverberation times of the studios’ echo chambers. These beautiful-sounding plates, with a variable reverb time of up to six seconds, were then tweaked to perfection by Abbey Road’s technical engineers. To keep noise to a minimum, EMI’s Central Research Laboratories designed unique hybrid solid-state drive amps for Plates A, B and C. Plate D was fully valve-powered on both drive and output stages, allowing a versatile array of sonic characteristics, from warm and dark to lush and smooth.

In each of these original plates, the stereo reverb effect is created by suspending a large sheet of metal with tensioned springs attached to each corner. A transducer injects the metal sheet with audio energy, which is picked up by two contact mics fixed to the surface of the plate. The reverb time can then be adjusted by using an internal damper, and all of this is contained within a large wooden unit.

These historic Abbey Road plates have been used on countless seminal pop, rock, classical and film recordings over the years, and continue to be used in all kinds of audio production to this day. Waves has now created meticulous models of these stunning and unique-sounding units, individually modeling the harmonic distortion of both the drive and output amps as well as the individual plate/damper behaviors.

Precise modeling of four legendary Abbey Road reverb plates (EMT 140), each with its unique character
A drive control to set the THD characteristics of the in/out amplifiers and the plate sheet itself
Ability to control the amount of analog noise and hum
Four original bass cut positions
Crosstalk between the stereo inputs to get a stereo leak effect