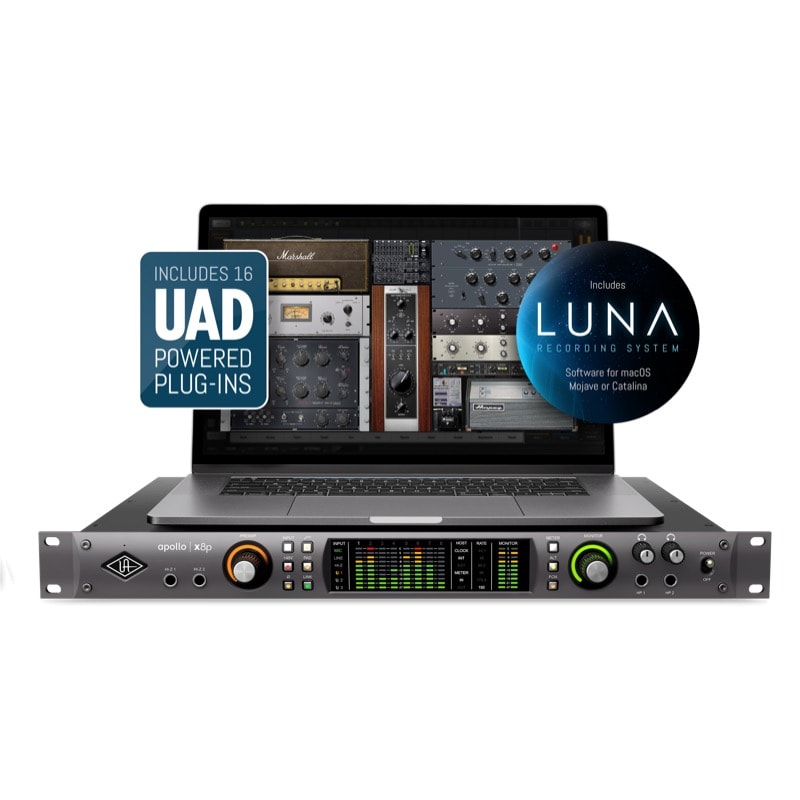 Universal Audio have outdone themselves yet again, with a new elite-class converter design that features a whopping 129 dB of dynamic range and an impressive signal-to-noise ratio of -118 THD+N. The gorgeous clarity and punchy, open tone of Universal Audio’s Apollo line has been heard on countless Grammy-winning albums, and the new elite-class 24-bit/192kHz converters and fine-tuned analog circuitry continue the Apollo legacy. The Apollo’s class-leading sound is the perfect blank canvas for shaping your next hit with Universal Audio’s award-winning UAD Powered Plug-Ins.

The Unison-enabled mic preamps in the Apollo x8p let you track large projects through exacting mic preamp emulations from Neve, API, Manley, and Universal Audio. Exclusive to the Apollo series, Unison technology precisely captures the sonics of these renowned tube and solid state mic pres, down to the component level, including the input impedance, gain stage “sweet spots,” and circuit behaviors of the original hardware. The secret to Unison is the integration between Apollo’s mic preamps and its onboard HEXA Core DSP processing. By simply instantiating a Unison preamp plug-in on your mic input, you can tap into the classic sounds of the world’s most recorded mic preamps.

More connectivity for every workflow

Apollo X allows for Surround Sound monitor control for formats up to 7.1, bringing the sound and power of the Apollo to the world of post-production. For those integrating the Apollo into an older analog studio, the newly selectable +24 dBu operation will offer easy compatibility with tape machines, mixing consoles, and outboard gear. What’s more, the Apollo x8p now features both line-in and line-outputs on D-Sub connectors, allowing easy access to both the mic and line inputs for simple integration into your patchbay. Lastly, the new, built-in talkback mic allows instant, open communication between the engineer and the talent. The fact that you can record the talkback gives you yet another secret weapon for capturing interesting tones or recording quick demos, allowing you to stay creative rather than have to set up a mic during impromptu writing sessions.

The UA Apollo x8p includes a suite of amazing analog emulation plug-ins, including the world’s only authentic Teletronix LA-2A, 1176LN, and Fairchild compressors, the legendary Pultec EQs, and UA’s own legendary 610-B Tube Preamp. Developed by UA’s world-renowned team of algorithm engineers, Realtime Analog Classics plug-ins set the benchmark by which other hardware emulation plug-ins are judged. Also included with the Apollo x8p is Unison technology on the front panel instrument inputs, giving you spot-on, impedance-matched emulations of guitar and bass amps, such as the Fender ’55 Tweed Deluxe, Marshall Plexi Super Lead 1959, and Ampeg B-15N Bass Amplifier, as well as iconic stompboxes like the Ibanez Tube Screamer. And unlike competing interfaces, these DSP-powered plug-ins are also available in your DAW for mixing.

Apollo is the interface of choice for new-school hit-making professionals, used to record breakthrough albums by Kendrick Lamar (To Pimp A Butterfly), Coldplay (A Head Full of Dreams), Dr. Dre (Compton), Brad Paisley (Wheelhouse), and many more.