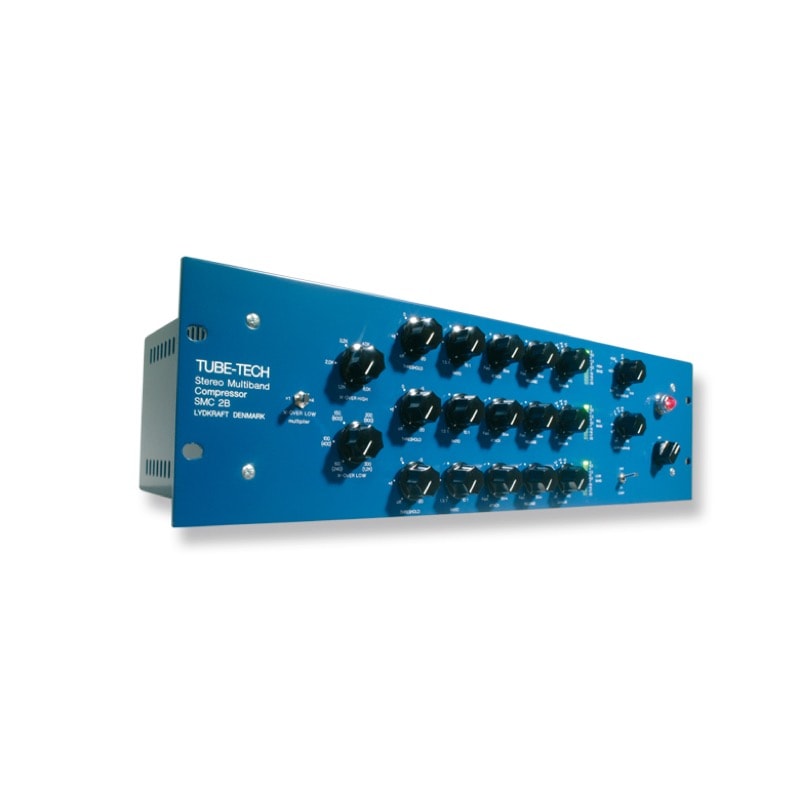 As a creative tool, the Tube-Tech SMC 2B multiband compressor is pure magic on the mix bus and sub-mixes, such as drums, and instrument groups. Three all-tube, wide-band opto-compressors in one, it’s also a surgical device that can remove annoying resonant peaks, particularly in bass instruments, or the presence range in vocals, where certain converters can ring. Speaking of vocals, the SMC2B is an excellent tracking device. It can handle extremely dynamic vocalists without “announcing” its presence. In mixing, it has an amazing ability to keep vocals present, enhancing the low-level detail, without flattening the performance—saving you hours in mix automation. It can also be used as a de-esser. Of course, once you put it on your man stereo bus, you’re probably going to want to keep it there at all times, due to the character, color, and dynamics it imparts to program material—so you just might need two SMC 2Bs.

Tube Tech SMC 2B Multiband Opto Compressor in one take:

INSIDE THE BOX—Tube-Tech SMC 2B

The TUBE-TECH SMC 2B Stereo Multiband Compressor is three independent optical stereo compressors in one, each with threshold, ratio, attack, release and gain, plus a display showing gain reduction. Master levels are set with Output Gain and Balance controls.

The SMC 2B divides input signals into three bands (low, mid, high) via 6dB per-octave crossover networks with variable frequency control The variable crossover points at 60Hz to 1.2kHz for low/mid band, and 1.2kHz to 6kHz for the Mid/High band, ensure precise control of opto-compression on each band. The design of the crossover networks optimizes the summing of all three bands, resulting in a flat frequency response (within +/-0.25dB), when the gain controls for each band are set at the same level.

Both input and output are balanced and have fully floating transformers with a static screen. The power supply and the sidechain circuit is based on a solid state circuit. With the exception of the output stage all DC voltages are stabilized.

OUTSIDE THE BOX—Tube-Tech SMC 2B

Rear panel I/O includes a universal IEC power connector, and balanced XLR input and output for channels one and two.

Why buy the Tube-Tech SMC 2B from Westlake Pro?

Not only do we build world-class studios, we are a legendary studio ourselves— Westlake Studios. If that sounds familiar, it because the world’s best selling album of all time, Michael Jackson’s Thriller was recorded at Westlake Studios. Whether you’re building a laptop studio or a world-class facility, why not work with the real pro audio experts—Westlake Pro.

The Tube-Tech SMC 2B is one of the most inspiring and musical audio tools around, an all-time favorite for top studio and live sound engineers the world over. For more information, call or chat online with your Westlake Pro Sales Consultant today.