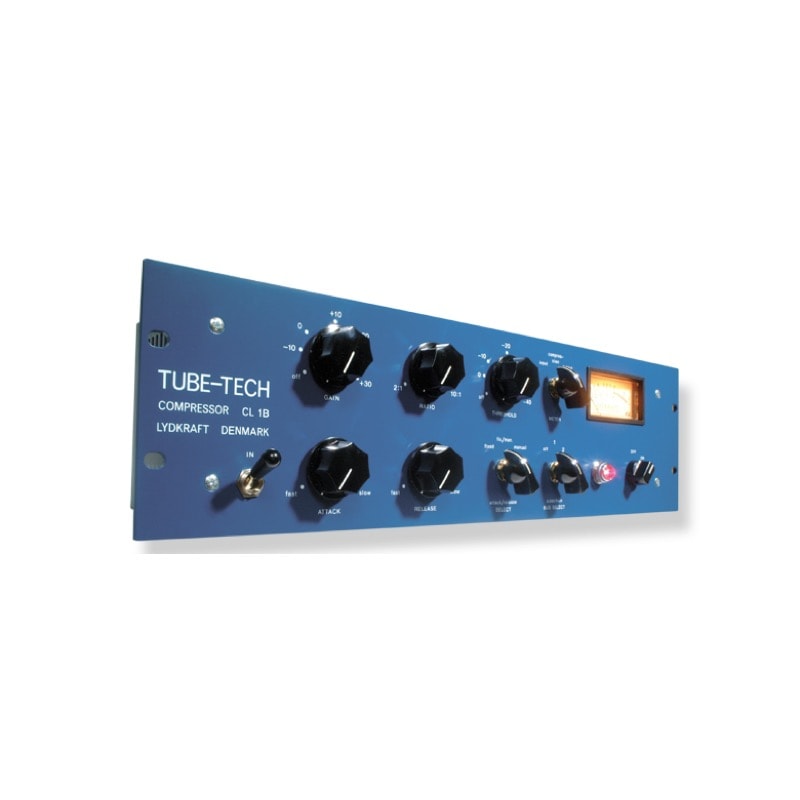 The Tube-Tech CL 1B is an all-tube, single-channel opto-compressor that has become as ubiquitous on lead vocals as the preamp made by that British gentleman (whose name starts with N and rhymes with “eve”), who shall remain anonymous. Tube-Tech’s best-selling compressor, the CL 1B is known for its incredibly smooth, musical compression, even at extreme settings. (If you can make the CL 1B sound bad, consider a career in the demolition business.) The CL 1B, due its all-tube design, also adds a rich, euphonic timbre to vocals, and like its gain reduction function, is never over-the-top or performance-compromising.

Tube-Tech CL 1B Mono Optical Compressor in one take:

INSIDE THE BOX—Tube-Tech CL 1B

The CL 1B’s gain-reduction element is positioned immediately after the input transformer. It’s controlled by the sidechain amplifier, which also contains two time control circuits; one fixed, the other for variable attack and release. The time controllers can either be either be used separately or in combination. In fixed mode, the attack is fast and release is program dependent. In combination, the attack is fast, while the release can be controlled manually. This circuit contains semiconductor OP-amps for overall control. A dedicated Bus selector with three positions (Off, Bus 1, Bus 2) is enables you to link several compressors together.

The CL 1B’s gain-reduction element is followed by a tube-based, push-pull amplifier with variable gain up to 30dB. Input and output transformers have an electrostatic shield between the primary and secondary wiring, which sends primary noise to ground. The shield will not re-radiate the noise signal, and also provides electromagnetic noise reduction. Additionally, to further prevent noise interference, both the input and output are balanced as well as fully floating, so there is no current path between I/O and ground. This design magnetically isolates the circuitry from external connections.

CL 1B in operation

In operation, the Tube-Tech CL 1B is as easy and intuitive. Whether you’re compressing vocals, bass, acoustic guitars, or keys, just dial in what you need to make the track stable in the mix, or to bring out subtleties, and the CL 1B does the rest—without distortion, muddiness, or obvious artifacts, always maintaining clarity, even if you have to hit it hard. This is why the Tube-Tech CL 1B is at the top of must-have lists for every serious audio pro (who doesn’t already have one), and heard on innumerable best-selling, best-sounding recordings in all genres.

OUTSIDE THE BOX—Tube-Tech CL 1B

CL 1B front panel controls include: compressor In/Out,  input gain from 0-30dB, variable attack and release, ratio, threshold, meter select, sidechain select, attack/release select, and power on/off. There is also a gain-reduction VU meter. One the rear panel are balanced XLR in and out, universal IEC connector, and two fuse holders, for 150V or 230V.

Who’s using the Tube-Tech CL 1B

Why buy the Tube-Tech CL 1B from Westlake Pro?

Not only do we build world-class studios, we are a legendary studio ourselves— Westlake Studios. If that sounds familiar, it because the world’s best selling album of all time, Michael Jackson’s Thriller was recorded at Westlake Studios. Whether you’re building a laptop studio or a world-class facility, why not work with the real pro audio experts—Westlake Pro.

Regardless of genre, nearly of the world’s top singers and musicians insist on the Tube-Tech CL1B for their recordings. Demand no less for yourself. For more information, call or chat online with your Westlake Pro Sales Consultant today.