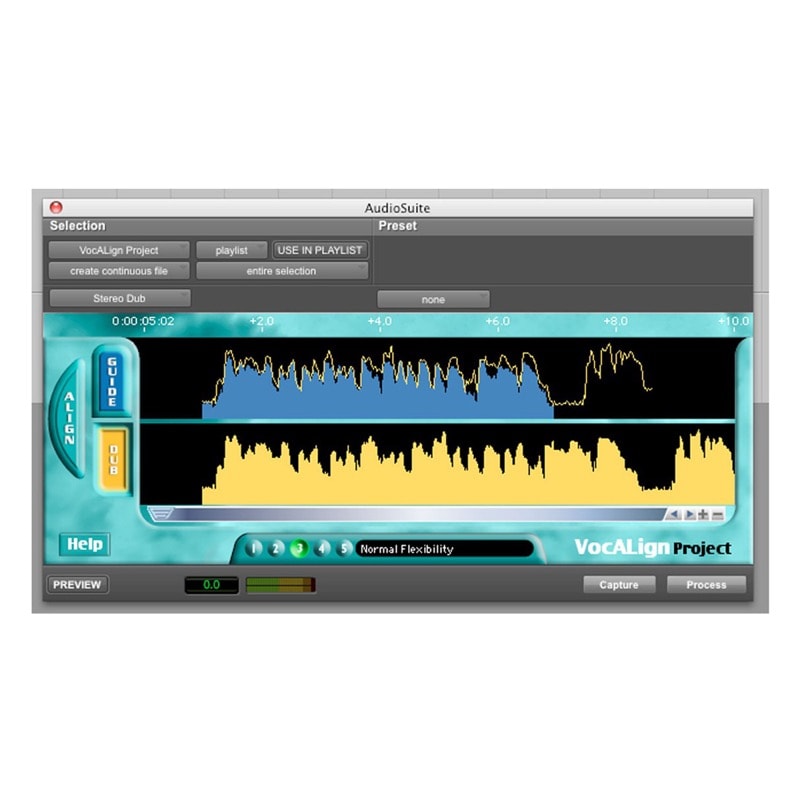 VocALign Project 3 provides the latest version of the basic and legendary VocALign program that has been available since 1995, providing instant tight alignment of one audio signal to another. Simply capture a Guide signal with the right timing, capture a Dub signal to be aligned, press one button, and a new aligned Dub is generated and returned to your DAW.

Quietly legendary, VocALign’s early life included use in music production ranging from Shania Twain and Steely Dan to Black Eyed Peas; as well as in popular TV shows such as Friends and Seinfeld and in blockbuster films including Harry Potter and Lord of the Rings.

HOW DOES VOCALIGN WORK?

VocALign works by applying varying amounts of time stretching or compression to one signal (called the ‘Dub’) to make its energy peaks and troughs align in time with a ‘Guide’ signal. It does this in three main steps as shown in the block diagram below.

Then it uses advanced pattern recognition techniques to examine the energy patterns and determine the best way to ‘warp’ the time structure of the Dub signal so that its energy pattern is matched to that of the Guide. The time-warping path describes the best time-distortion of the Dub for matching to the Guide.

The time-warping path is fed to an audio editing processor that time-compresses and expands the Dub audio to create the aligned version based on the path. It is this edited version of the Dub that is returned to the audio editing software for the desired use.

Note: In the above diagram, the spectrum analyser colours match those used in the VocALign screen for Guide and Dub audio signals and controls.

VocALign Project 3 iLok License will let customer run all of the following: