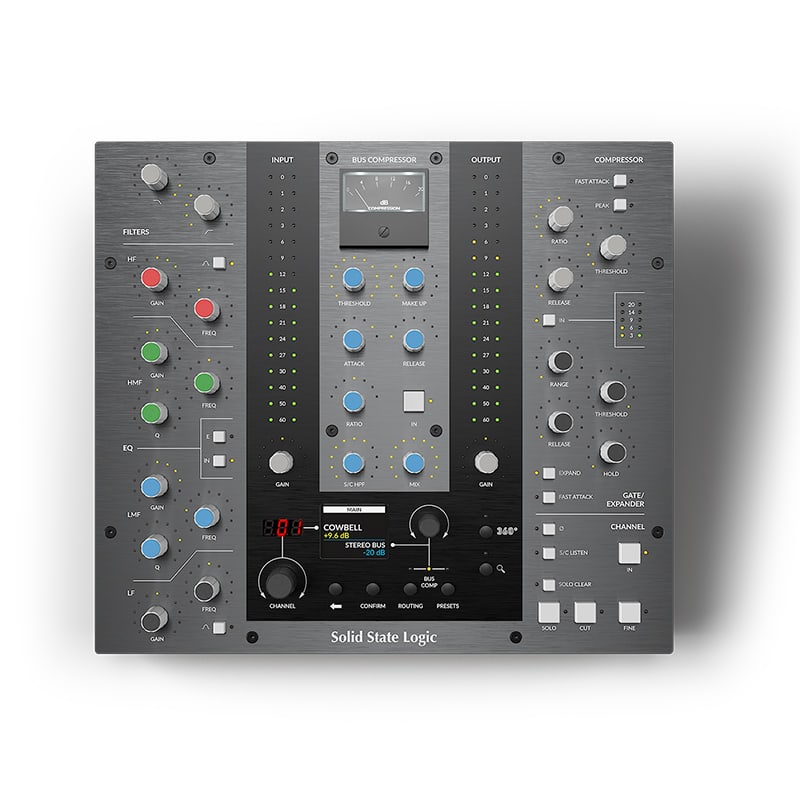 SSL production tools are the benchmark for studio ergonomics and workflow. UC1 draws on decades of analog and digital console design to develop an intelligent and deeply integrated SSL plug-in control surface that lets you focus on your production goals and not the process.

Every detail of UC1 has been implemented to keep you in control and informed of how your mix is reacting to processing. Dedicated front-panel encoders accompanied by an onboard hi-res display allow you to move quickly between instances of Channel Strip and Bus Compressor directly from the surface. You can also load presets, as well as alter the Channel Strip process order.

At the heart of the UC1 system is the SSL 360° Plug-in Mixer, view and control all of your Channel Strips and Bus Compressors in one place. 360° Plug-in Mixer offers an efficient way of interacting with multiple plug-ins simultaneously, further bridging the gap between console and in-the-box workflow.

At the heart of UC1 are Bus Compressor controls. Its authentic layout and metering feels like you’re controlling a hardware bus comp built into the center section of an SSL console. With a classic moving-coil gain reduction meter as found on SSL consoles since the 1970s, it represents the Bus Compressors time constants and gain reduction characteristics perfectly for producers and engineers to know exactly how it’s reacting with their instruments, subgroups and of course mix bus.

Full licenses of SSL Native Channel Strip 2 and Bus Compressor 2 plug-ins are included with UC1. Channel Strip 2 is a fully-featured Channel Strip, based on digital modeling of the EQ and Dynamics curves from the legendary XL 9000 K SuperAnalogue console. V2 adds SSL’s proprietary anti-cramping algorithms and the ability to trigger the dynamics sidechain externally. Bus Compressor 2 adds a tonne of user requests, with additional Ratio, Attack, and Release options, the ability to trigger the sidechain externally, as well as x2 and x4 oversampling.