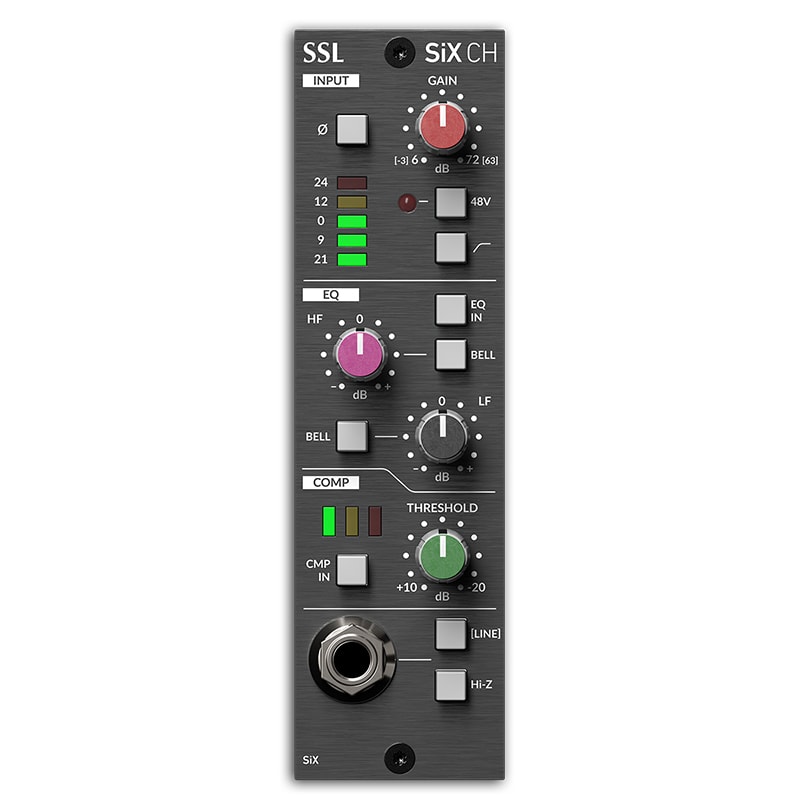 The SSL SiX Channel is a single-width 500 Series mini channel strip using the SuperAnalogue channel processing features from SSL’s SiX console including the Mic-pre, low and high frequency EQ, as well as the single knob compressor. The SiX Channel is a simple way to add additional Mic/Line inputs to the line level inputs of any professional audio device, including the Stereo channels of the SiX console. It is also a flexible way to create a professional modular mixer from a ‘summing’ 500 Series rack unit.

A wide gain range, ultra low noise SuperAnalogue design provides both Line and Mic facilities with a “Line” gain range switch to cover a wide range of source levels. The nominal Line Input impedance is 10 kΩ. This can be changed to 1 MΩ using the Hi-Z switch. The 1MΩ impedance makes this input suitable for very high impedance sources such as passive guitar pickups without the need for an external DI box.

The EQ is a gentle, broad stroke two-band design with high and low shelving filters at 3.5 kHz and 60 Hz, adjustable from +15 dB to -15 dB of gain. Each band can be independently switched between shelving and bell curves. The bell curves change centre frequency to operate at 5 kHz and 200 Hz giving greater versatility from the two controls.

A versatile ‘one knob’ channel compressor with features that give powerful and versatile performance from its deceptively simple controls. A three LED meter indicating the amount of gain reduction being applied. The circuit has automatic make-up gain to maintain signal level for the full range of threshold settings.