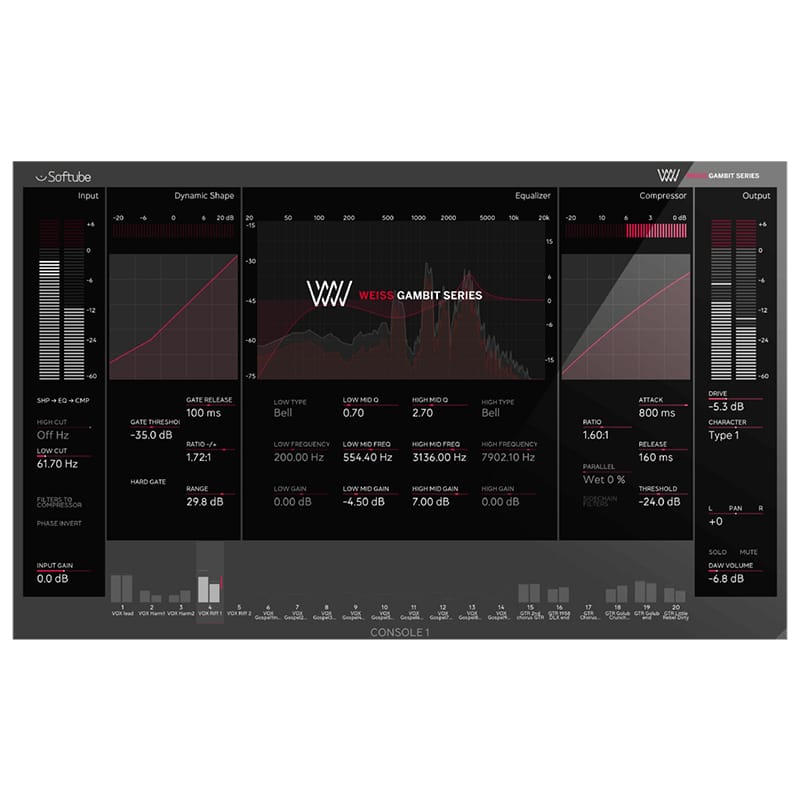 It’s here. One of the most highly requested components for Console 1 makes its debut. Introducing the Weiss Gambit Series for Console 1. A painstaking extraction of the top features from two of the most admired digital processors, Weiss DS1-MK3 and Weiss EQ1—plus characteristic extras—the result is the clean, sharp channel strip engineers everywhere have been waiting for.

Joining a storied slew of offerings in the successful partnership of Softube and Weiss Engineering, Weiss Gambit Series gives you the algorithms of the originals. But it also sports exclusive, high-end features such as below-threshold compression. Weiss Gambit Series channel strip for Console 1: created for mastering, now tailor-made for mixing.

Another refreshingly new product brought to you in partnership with Weiss Engineering.

A strict, 1:1 code port combining the best of Weiss DS1-MK3 and Weiss EQ1 into a singular channel strip.

The Measure of Mastering

The apex of mastering units since its launch in the 1990s, Weiss DS1-MK3 is an indispensable tool in studios around the world. Unrivaled versatility and incomparable sound quality have made it an essential ingredient in nearly every major record of the past two decades. While Weiss’ updates and improvements to DS1-MK3 have made it practically perfect, Softube + Weiss’s fully digital compressor/limiter/de-esser performs tasks that an analog unit couldn’t even dream of.

The renowned sonic qualities of Weiss Engineering’s EQ1—combined with its flexibility as either a Minimum Phase EQ, a Linear Phase EQ, or a Dynamic EQ—have made it the essential digital mastering equalizer since its release in 1996. The plug-in is a one-for-one, line-by-line code port of the original with state-of-the-art bonus features that give it increased functionality over the original algorithms, 32-bit / 192 kHz operation, and updated ergonomics.

Softube’s exclusive partnership with Weiss Engineering comes with some pretty sweet perks. In creating the Gambit Series, Softube had the opportunity to work in collaboration with Daniel Weiss himself. Together they created features for the channel strip that make it a powerful mixing tool that can also be used for mastering. Features such as high/low pass filters, gate, expander, below-threshold compression, surgical equalizing, compressor, and limiter.

Low noise and super smooth, the input section features the 12 dB low-cut and 6 dB high-cut filters from the EQ1. Just like the original EQ1, every parameter is discrete, but with hundreds of steps that make it easy to dial in exact settings.

The Shape section of the Weiss Gambit Series works below the threshold. You can do normal expanding/gating, but it’s also possible to do below-threshold compression. With below-threshold compression, you can enhance the soft sounds without affecting the loud sounds to, for example, bring out the tail of a reverb or the room sound of a drum bus, or get more legato in an electric bass without affecting the punch of it.

The EQ consists of the Weiss EQ1 in Low Latency mode without any dynamics. All four bands have a full range of frequency and the same cut/boost range as the original: -39 dB to +18 dB. The low and high bands have a fixed Q-range but selectable Cut, Peaking, and Shelving (Cut, Bell, and Shelf on Console 1). The two mid bands work exactly like the EQ1 bands in Peaking mode with the same extreme Q-Range of 0.2 – 650 as the original unit.

The Compressor is the same as the Weiss DS1 with a limited feature set, just like the Weiss Compressor/Limiter plug-in. The ratio goes from 1:1 to 1000:1 and has an attack time as short as 0.02 ms. Pretty cool, if you ask us.

How do you make a Drive for a super-clean unit? Well, it’s not a drive so much as the Limiter from the DS1 and Weiss MM-1. Use the Drive knob to increase the gain into the Limiter thereby limiting all signals above 0 dB. The Character lets you select between the three limiter types: original DS1, enhanced Type 1, and enhanced Type 2.