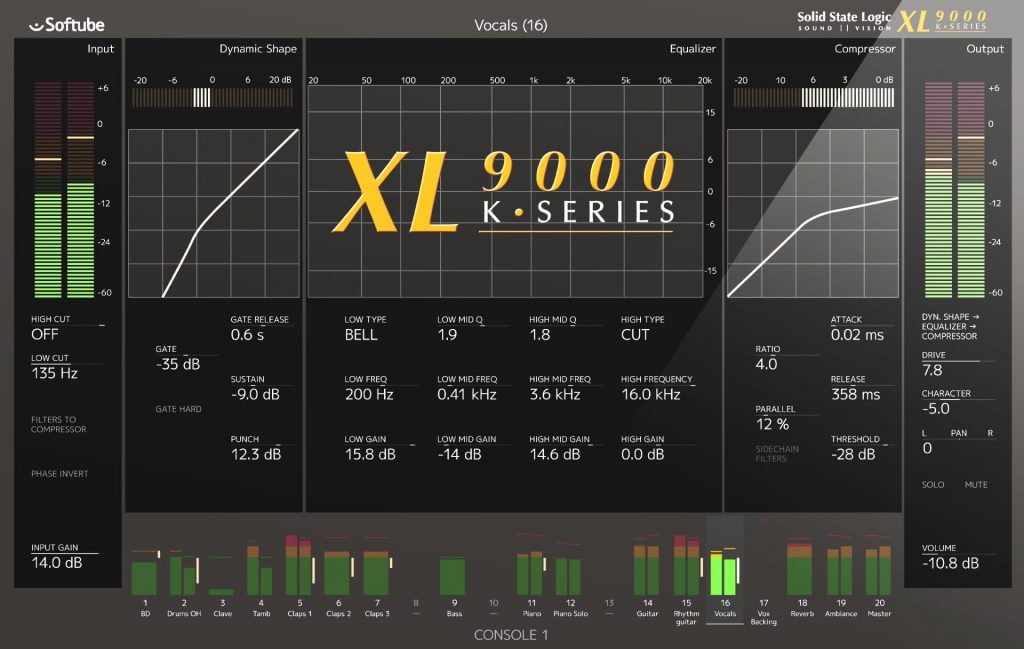 While Solid State Logic’s SL 4000 E is widely considered a great pop and rock’n’roll console with its slightly gritty and forward sound, the circuit design of XL 9000 K offers an extreme bandwidth, minimal phase shift and super low distortion. This makes it one of the world’s most popular analog consoles for hip-hop and R’n’B, where the solid, deep low end and extended highs work great for getting that hyper modern, large and wide sound. For the same reasons, it is also loved for classical and acoustic audiophile recordings.

VHD model included
XL 9000 K is a very clean console. In order to still have the option of using distortion creatively, we added a model of Solid State Logic’s VHD (Variable Harmonic Drive) circuit, which is part of the Duality series consoles and Alpha channel preamps. The Drive knob on Console 1 determines the amount of distortion, and the Character knob moves the added distortion from 2nd order (more tube-like) to 3rd order (more transistor-like), or any in-between blend—just like on its analog counterpart.

Extended gate and compressor options
Furthermore, the Shape section of the XL 9000 K for Console 1 features a fully controllable gate unit, where the Punch and Sustain knobs control Range and Hold levels. This makes it more individually controllable compared to the SL 4000 E model, where a fast workflow was prioritized. The compressor can be switched between Peak and RMS modes, which gives a wide range of options. The equalizer is clean, smooth and natural.

History
When the first 9000 series console came out in in the mid-1990s, it represented a breakthrough in analog circuitry design. The sound path is entirely capacitor-free, in order to keep a perfect signal integrity and low distortion. The XL 9000 K was the last and most developed version of the 9000 series, released in 2002. It is this version that forms the backbone of Peter Gabriel’s RealWorld Studios, Wyclef Jean and Jerry Wonda’s Platinum Sound, while Michael Brauer uses a slightly older 9000 J in his room in Electric Lady Studios.