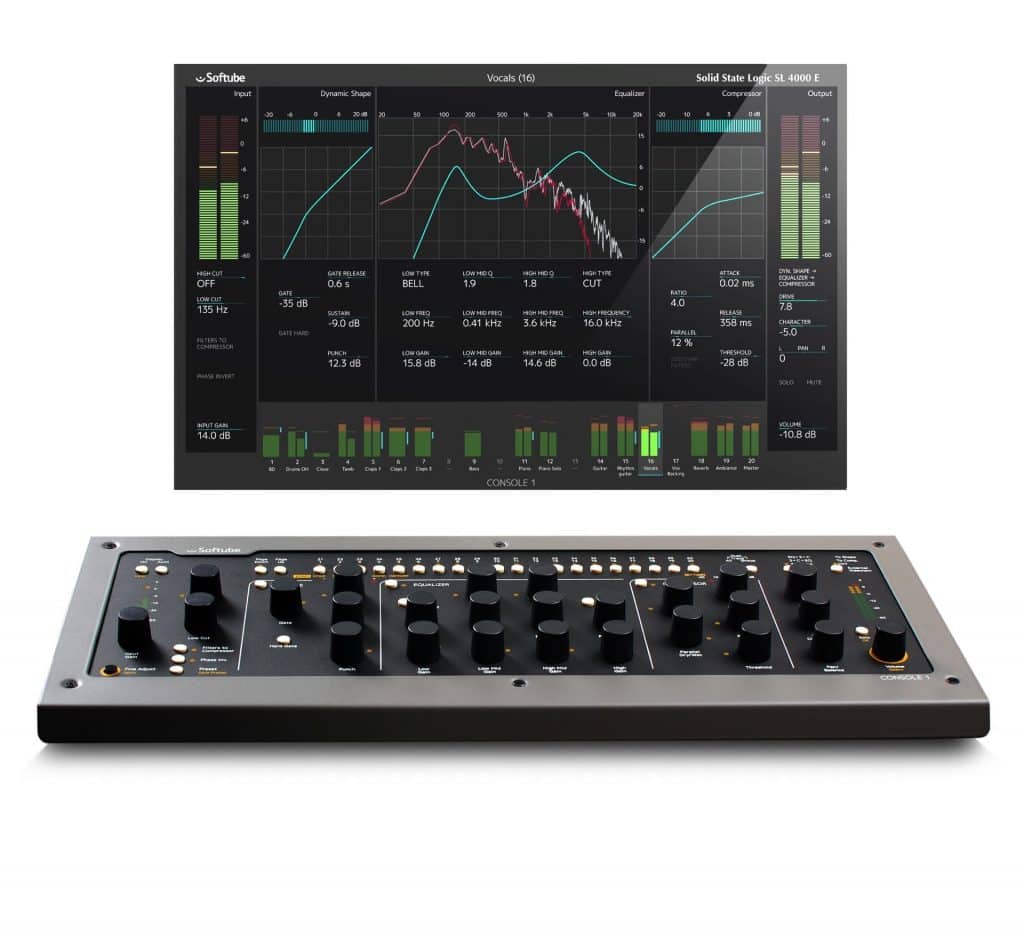 Console 1 in One Take:

– Next generation mixer
– Tightly integrated hardware/software system
– Solid State Logic SL 4000 E model included
– Hands-on control and intuitive workflow
– Use with any major DAW
– Parametric equalizer, compressor, gate, transient shaper, high/low cut filters, and harmonics/distortion
– Customize the channel by adding any Softube equalizer or dynamics plug-in
– The system will run and the settings can be adjusted without having the hardware connected

Inserting the Console 1 plug-in on any or all mixer channels of your DAW routes the sound from the DAW into the Console 1 mixer and back. Press a track selector button on the Console 1 hardware, and start tweaking the knobs. That’s it! The full-featured channel strip is at your disposal and each function has a corresponding knob or button on the hardware. Very few functions are accessed through menus.

Included in the Console 1 package is Softube’s model of Solid State Logic SL 4000 E—one of the most classic and widely used analog consoles in the world. Softube’s model has been scrutinized by Solid State Logic’s own experts, who have officially endorsed it. The channel strip includes the coveted black knob E 242 equalizer, the classic channel compressor, the musical expander/gate and the sweet high and low cut filters from that channel. We have also included a model of the harmonics, distortion and non-linearities obtained from overdriving the SL 4000 E console, which can be used to add analog distortion across the entire mix for that coherent “glue” sound. Adding to that is Softube’s own Transient Shaper, which is not a part of the SL 4000 E console or any other analog unit for that matter. There will be more channel strips for Console 1 in the future, to be purchased separately.

The Visuals
The On-Screen Display gives you perfect and detailed visual feedback of the selected channel’s settings. At the bottom of the window, the meter bridge displays the levels of the currently selected channel bank (unlimited number of banks, each holds 20 channels). But you also get plenty of visual feedback from the hardware. LED rings show the knobs’ positions, and meters display input and output levels, as well as gate and compressor gain reduction. So for an even more analog mix experience, just turn off the On-Screen Display and use your ears! You won’t get lost.

The Extras
An added bonus is that each channel can be separately customized by adding in any Softube equalizer or compressor. So if you have, say, the Tube-Tech CL 1B Compressor and prefer it to the Solid State Logic SL 4000 E compressor for a certain track, just exchange it.

Apart from basic features such as Solo, Mute and Phase Invert, the system offers several additional functions to make your mix work easier, all controlled from the Console 1 hardware. This includes the ability of grouping any or all channels to tweak the settings simultaneously across the group, and changing the order of the effect sections. You can copy settings from one channel strip to the other, or just the sections you want to. You can also use parallel compression and route an external sidechain signal into the gate or compressor. You can save and call up presets for the entire channel strip or the separate channel sections. The on-screen display is toggled on and off with a dedicated button on the hardware.

The History function is simply an undo feature that allows you to go back in time and undo all parameter adjustments you have performed. Very few DAWs offer an undo function for plug-in settings, but you get that with Console 1.