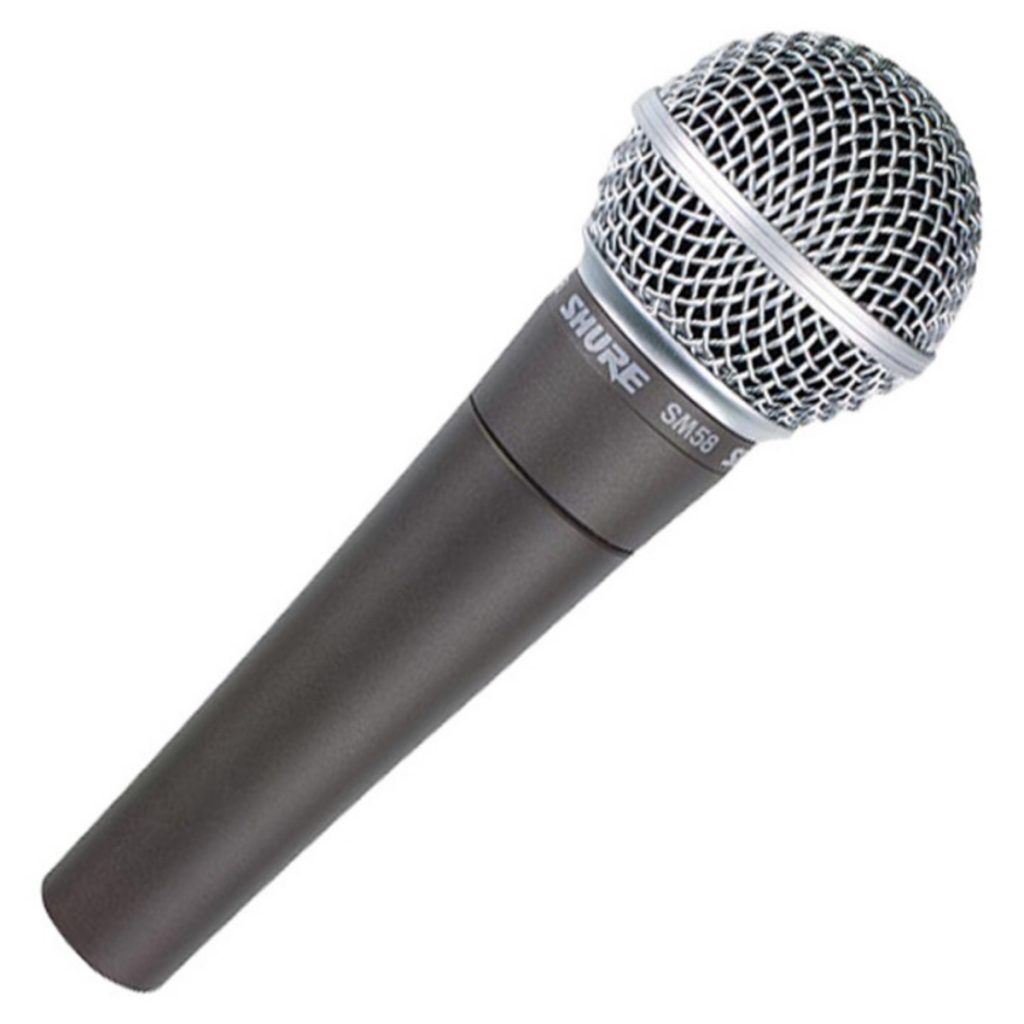 The Shure SM58 is the world’s most popular vocal mic. It’s been seen and heard in action everywhere from presidential podiums to performances and recordings by the world’s premier artists

Known for their bullet-proof reliability, which is one reason why, for over 50 years, the Shure SM58 has been the mic of choice for live performance, Shure SM58s have been used as a hammer to build the stage, only to be used later that night in performance without a glitch. Shure engineers have put them through the most rigorous tests, including shooting one out of a cannon. (Yes, it still worked.) In fact. Shure encourages users to send their war stories, where a 58was subjected to life-threatening circumstance and still came through to win the night. For example, one of the SM58’s used by The Derek Trucks Band was run over and flattened by the band’s tour bus. It still works to this day, though it has been retired from service. Sonically, the SM58 is smooth, rich, and present, thanks to its frequency range, which is sculpted specifically for vocals. It has a brightness bump in the midrange or presence range, and bass roll-off to prevent low-frequency noise and sounds from muddying the performance. From the presidential podium to the “real boss,” Bruce Springsteen, the Shure SM58 remains an iconic part of American history.

The history of the Shure SM58

Initially, the SM58 in concept, was to provide a solution in the recording studio for the popular, but unreliable ribbon mics. In those days, air entering the exposed grille of a ribbon mic by simply walking across the studio floor could knock the ribbon diaphragm off its mounts, bringing the session to a screeching halt. Even if you succeeded in walking the mic to its case without incident, closing the lid too quickly (even with a “sock” covering it) could knock the ribbon off its pins. Shure Microphones tasked engineer Ernie Seeler with a mission to find a way to compete with the warmth, accuracy, and rich sound of studio ribbon mics while providing the durability necessary to work session after grueling session. As it turned out, Seeler and his team inadvertently created the ideal live vocal mic—The Shure SM58—and the rest is history.

Regarding the sound of the SM58, Michael Hutchence, the late frontman of INXS, once commented that he found it amusing that studio vocals would be recorded through an expensive condenser mic, only to have engineers spend hours EQing it to sound like a Shure SM58.

Inside the Shure SM58

To serve as a second stage pop filter after the outer grille, foam is placed on top of the resonator cap. For maximum gain-before-feedback, capsule ports* are carefully calculated to ensure a uniform cardioid polar pattern across the frequency range.

A pneumatic shock mount virtually eliminates stage vibration and handling noise, while an adhesive compound secures the transformer and prevents moisture and temperature changes from entering the handle. It also creates an airtight chamber to enable proper shock-mounting and low-frequency response

Finally, every SM58 Shure manufactures must pass a frequency-response test to ensure the consistency that vocalists and engineers rely on night after night.

*High-level mic performance tip: A cardioid polar pattern is created by ports at the rear of the capsule that are specifically spaced for the highest amount of rejection of the sound entering the ports. This is how feedback is controlled. So, when a singer, in the height of emotion, wraps their hands around the rear of the mic grille, the ports are closed, which turns the polar pattern to omnidirectional, which is prone to feedback. The emotional passage is met with squeals, and not of delight from the audience. Usually the soundman gets blamed.

Outside the Shure SM58

Designed to dent upon impact, shock-absorbing grille protects the cartridge from damage. Primer and paint are chemically tested, then pulled with tape to ensure proper adhesion.

My own Shure SM58 story

As a writer of product pages for Westlake Pro, I never get personal, but this time I do have a Shure SM58 story to share. Before becoming senior staff writer at Westlake, I recorded a late-night standup comedy show for an NBC affiliate network. The stage mic for the comedians was a Shure SM58, which had been in service for years before I took over the console. That mic was used as a prop by a cavalcade of comedians, who swung it in circles overhead by the cable, dropped it, and subjected it to all manner of abuse. In the case of one comedian, who did warm-up nightly, would head-butt the 58 and drop it repeatedly as part of his persona as a clumsy incompetent standup comic. One day, the SM58 fought back. From being tossed about so much, the grille had been dented to the point of opening up a sharp edge. One night, when the warm-up comedian head-butted the SM58, it put a pretty nasty cut on his forehead. Since the show must go on, without missing beat, he performed his routine through the mic, which never stopped working. However, it did give the comedian a taste of his own medicine. I simply replaced the grille and continued to use the mic without incident.

Starting with just about every musician who has ever played a gig at a club with a house system set up, yes, you’ve sung through an SM58. And, you’re in good company with no less than Bruce Springsteen (who still sings through a classic SM58 capsule), Willie Nelson, Bono, Brian Eno, Ozzy Osbourne, John Mayer, Mark Tremonti (stage and studio), Henry Rollins, Patti Smith, Sheryl Crow and of course the lesser-known, but erstwhile performers, Sir Paul McCartney, Mic Jagger, Robert Plant, Billy Joel, and the late Freddie Mercury.

The sooner you order your Shure SM58 from Westlake Pro, the quicker we can add your name to the list of luminary users above.