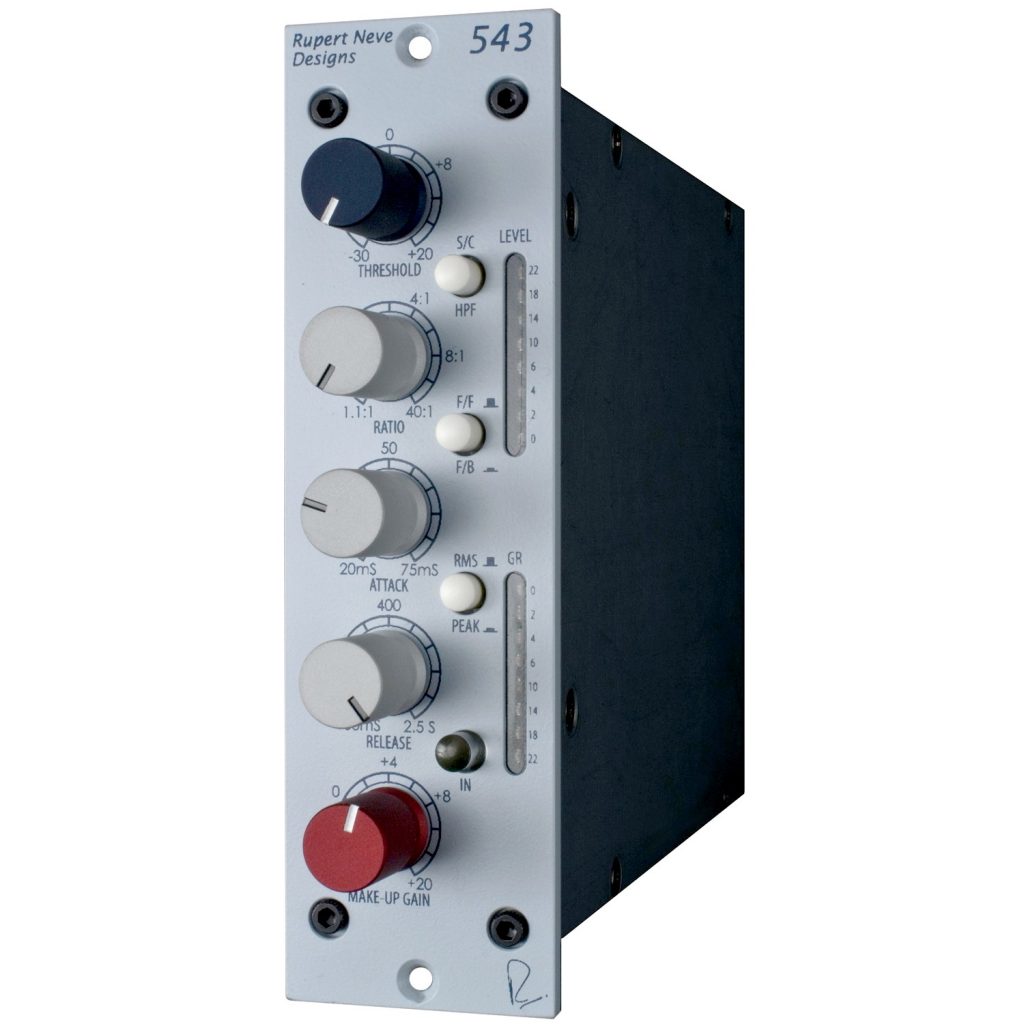 Fully controllable compressor-limiter with feed-forward / feedback modes, Peak / RMS detection and a built in side chain high pass filter for the 500-series format

If anything, the 543 proves that transparent does not equal sterile—at least not in the hands of the master—Mr. Rupert Neve. Perhaps the most difficult chore of compression is to do its job and get out of the way, ensuring controlled levels without leaving traces behind; you know, the downsides of compression, including pumping, breathing, obscuring transients and vocal consonants, and just plain stonewalling the signal in a non-musical fashion. The 543 features a fully controllable compressor-limiter with selectable feed-forward or feedback modes, Peak/RMS detection, and a sidechain high-pass filter. Backed by the towering heritage of Neve and a stellar feature set, the 543 yields a combination of rich warmth, flexibility, and precision that will thrill the ears of audio professionals the world over.

The Rupert Neve Designs 543 500-series compressor in one take:

INSIDE THE BOX—Rupert Neve Designs 543 Compressor

With Mr. Rupert Neve’s custom transformers at its core, each 543 module encompasses individually controllable threshold, attack, release, makeup gain, ratio, side chain HPF, feed-forward/feedback selection and Peak/RMS detection modes. With the compressor inactive, the 543 may be used as a transformer-coupled, high-performance line amplifier, and two 543 may be linked for stereo operation as well. The chassis is built to standard 500 series specifications, with power and I/O provided by the rack.

How the compressor works

In order to control gain, a VCA or Voltage Controlled Amplifier (or attenuator) is used. There are many types of voltage control, including the use of tubes, discrete and integrated solid state circuits, and naturally non-linear devices. Each one has its characteristic behavior, which reflects sonically on the final performance, and gives it a character or signature that can be musically attractive or not. The 543 makes use of a very accurate, low noise, low distortion V.C.A. having, essentially, no signature of its own.

A part of the audio signal is rectified and smoothed to produce a suitable control voltage for the V.C.A. which has to respond very quickly and have low distortion. If the response is too fast, low frequency signals will themselves, be gain controlled! If the response is too slow, the signal will overshoot and the first few cycles will not get compressed. The speed and accuracy of the response, known as the attack, and the time frame that gain remains under the initial control, known as release or recovery and plays a large part in the way a compressor sounds.

The 543 also has the ability to switch between feed-forward and feed-back modes. If the V.C.A. Control voltage is taken from the 543 output, (i.e. after the V.C.A.) it cannot act immediately on the V.C.A. because it has already been modified by settings of the V.C.A. and circuits through which it has passed. This is known as a “Feed-Back” compressor. The two compression characteristics are quite different; there is more “Overshoot” and both the attack and recovery ramps are changed, providing the user with powerful choices.

In most of Mr. Rupert Neve earliest designs, feed-back detection controlling the VCA with a rectified voltage from the unit output was intrinsic to the musical dynamic response. However, the very nature of a feedback compressor limits the attack time of the compression circuit. To offer faster, more technically accurate response times, feed-forward detection was implemented on Mr. Rupert Neve’s more modern designs. With the FF / FB switch, both classic and modern VCA responses are available.

One of the more unique features of the 543 is the new Peak / RMS mode also found in the Portico II Channel. This switch allows the VCA (voltage control amplifier) to respond to both RMS (Root Mean Square) and peak levels. RMS circuits are considered to better mimic the way the ears perceive apparent loudness, while peak circuits tend to directly respond to the waveform voltage which may be more of a concern for prevention of clipping and maximizing levels. In this case, peak mode uses a combination of both methods to get the best of both worlds, and avoids the drawbacks of each method on its own.

When the Link switch is engaged on two 543 modules with settings at approximately the same values, gain-reduction on both channels will be the same to preserve stereo balance and position. This will work properly in link bus-enabled 500 series racks, or by hard-wiring two 543 modules link busses together in non-compatible racks.

For ducking, signal passing through the first module may be used to control the amplitude of a second module when the Link switch is engaged on two connected 543 modules. For example, the level of music through channel A can be controlled by speech on channel B, i.e. reducing the music level to make a “speech-over” announcement.

OUTSIDE THE BOX—Rupert Neve Designs 543 compressor

The front panel of the 543 has the following controls:

The RND 543 brings transparent yet highly musical Neve compression to the 500 series format—and subsequently your studio. For more information, call or chat online with your Westlake Pro Sales Consultant today.

Continuously variable from 6 dB to +20dB

Continuously variable from 36dB to +22dB

Continuously variable from 20mS to 75mS

Continuously variable from 100mS to 2.5 Seconds.

Balanced and Floating Transformer Output
Maximum output from 20Hz to 40kHz is +23dBu.