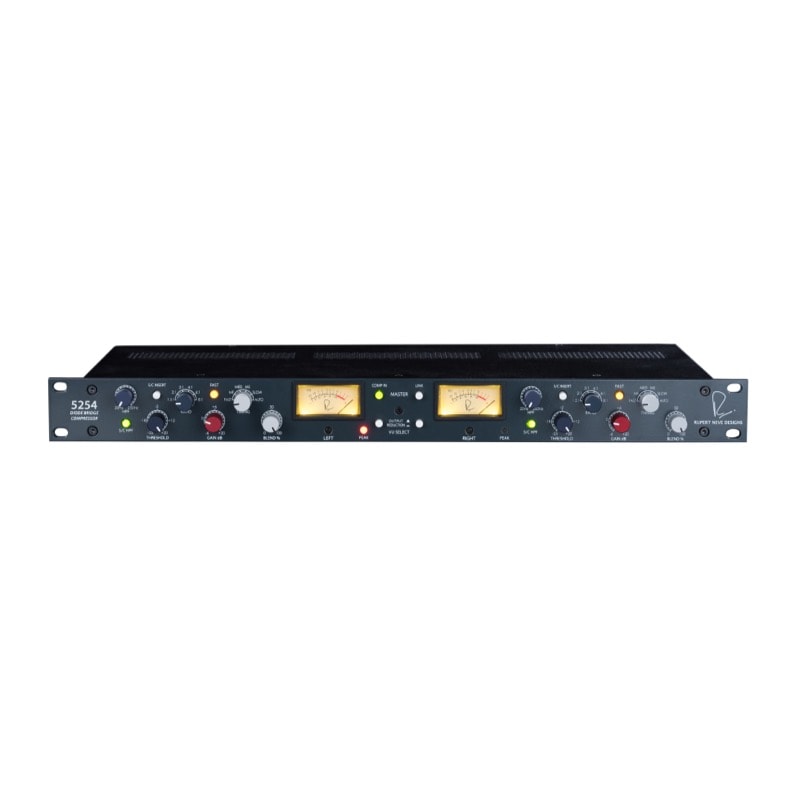 Unlike their VCA compressors, which are built for exacting clarity, the harmonically rich tonality of the Dual Diode Bridge Compressor is built to produce a wide range of colors – and built to help you make a statement with your music. Based on the dynamics circuit originally developed for the acclaimed Shelford Channel, the 5254 is outfitted for dual mono or stereo use with Rupert Neve Designs’ custom transformers and class-A electronics, tailor made for a compact 1U 19” enclosure.

Fifty years after Mr. Rupert Neve created his first compressor designs, the Dual Diode Bridge Compressor reimagines the larger-than-life personality of these classic circuits with new levels of precision and control, enhanced creative power, and increased punch to your tracks, mixes, and masters.

Where the VCA compressor found in the Portico II Channel and Master Buss Processor provides unmatched clarity, the weighty, harmonically rich tonality of diode bridge compression can be essential in pushing key sources like vocals, electric guitars, bass and drums to the forefront of a mix. By understanding the limitations of the vintage units’ topologies, painstaking effort was taken to reproduce the unique tone of these classics while improving the noise floor, expanding inflexible time constants, adding full wave sidechain detection for improved dynamic response, and widening the range of threshold and ratio controls. Delivering the powerful sound of these iconic designs with enhanced flexibility for the modern age, the Dual Diode Bridge Compressor is a dynamic tool equipped to make a bold statement on virtually any mix or track.

The unified TIMING control consists of six selectable settings, carefully chosen for different applications – a major departure from the slow, fixed attack of the vintage units. FAST and MF settings are designed to help clamp down on more transient signals like drums, plucked string instruments and fast vocals. MED and MS have slightly slower attacks and releases which allow more transients through, while having a slightly longer recovery. Lastly, SLOW and AUTO are both significantly slower and feature complex nonlinear release times, with smoother, less audible level control.

FAST mode increases the speed of both the attack and release for each setting, also effectively doubling the number of time constants from 6 to 12. The FAST mode also allows for a dramatic increase in speed as compared to the Dual Diode Bridge Compressor’s renowned ancestors, providing significantly more tonal & operational versatility.

Faster TIMING settings will generally lead to higher peak-to-peak control voltage ripple, and therefore induce more harmonic content, translating into more color in the main audio path. Slower TIMING settings will smooth the control voltage significantly, and thereby reduce the harmonic content added to the audio path, resulting in more transparent compression. It is also worth noting that due to the nature of this topology, these time constants inherently adapt themselves slightly depending on several factors: compression ratio, threshold, and source material. This dynamically generated timing shift and harmonic content is what gives the Dual Diode Bridge Compressor its unique personality.

Given the naturally colored sonic signature of the 5254’s diode bridge, this built-in parallel compression ability is especially useful. The BLEND control allows the user to inject smaller amounts of extreme compression into an otherwise unaffected signal, creating an enhanced yet natural sound that maintains dynamic range with blendable color and punch.

In addition to the TIMING control, the diode bridge compressor can be further manipulated by the RATIO, THRESHOLD, GAIN, S/C HPF, S/C INSERT and LINK controls. The RATIO control has six selectable positions on the rotary switch and allows the user to set the slope of the compressor curve with ratios of 1.5:1 through 8:1. The THRESHOLD control allows the user to adjust the point at which compression begins, ranging from -25dBu to +20dBu. The GAIN control adds make-up gain ranging from -6dB to +20dB. The S/C HPF is 12dB/octave with continuously variable frequency control from 20Hz to 250Hz. This feature can be immensely useful for making the compressor respond less to the powerful – and often more sustaining – low frequencies in a mix or instrument, which might otherwise give the compressor a more “mushy” response. The SC INSERT is comprised of an always-active send and return for the compressor side chain, which can be used to insert a more fine-tunable EQ to further sculpt the compressor response, or as a way to insert a key signal into the return, controlling the compression via a separate source to “duck” the signal when the key source is above the threshold. LINK connects the control voltage between the two channels – so when one channel is triggered, it will trigger the other channel equally. This can often help maintain a solid center image in a stereo source. Note: for stereo sources, it is always worth auditioning the “unlinked” sound as well, as linking can sometimes clamp down on the effective stereo width when the compressors are triggered by one side.