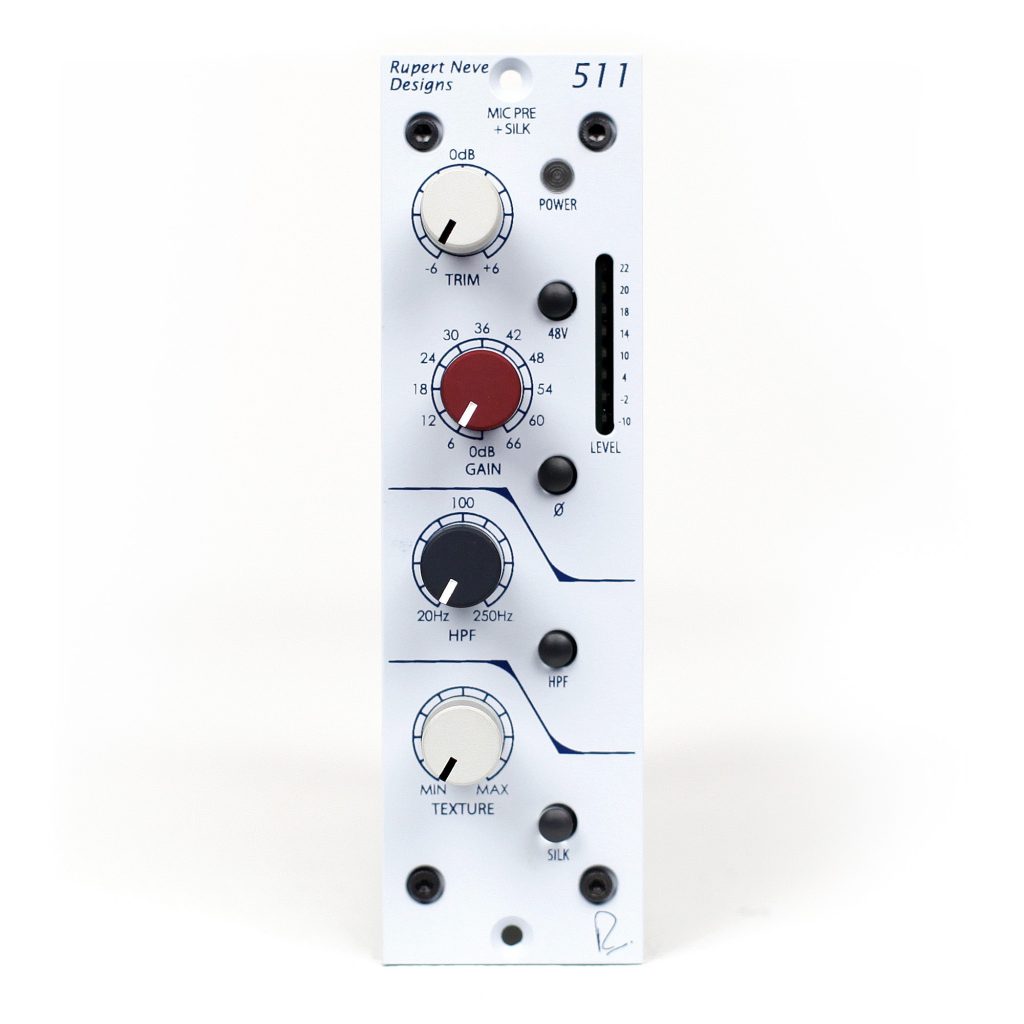 You’ve wanted a classic Neve preamp in your racks since the world was young, but let’s face it, owning the best costs quite a bit more. Well, Mr. Rupert Neve hears your pain and responds with the 500-series, Rupert Neve Designs 511 Mic Pre with Texture. To give you the power of the pros, the 511 comprises the powerful preamp from the 517, the sweepable high-pass filter from the Portico 5012, and the transformer-saturation of the variable silk circuit from the crown jewel of the RND range, the Portico II Channel. A Rupert Neve-designed mic pre that anyone can afford, the 511 packs a tremendous amount of sonic firepower in a 500-series power rack space.

INSIDE THE BOX—Rupert Neve Designs 511

Input signals may be derived from Mic or Line sources (make sure 48V is off for line sources!). The input has a 10k ohm non-reactive input resistance that handles a full 22dBu signal without the need for a pad. The pre-amp is a TLA non-reactive design that precludes the loading of microphones with limited driving capability. A primary gain control provides 66dB of gain in 6dB increments for easy recall, with a ±6dB trim for fine adjustment. For condenser microphones and powered DIs, there is +48V phantom power. A transient-optimized HPF continuously covering the range from 20-250Hz is included to tame rumble and proximity effect.

One of the key developments in the 511 is the Red Silk / Texture control from the Portico II Channel. Building on the “Silk” mode found in the Portico Series mic pre-amplifiers, Texture is designed to adjust the actual amount of harmonic music content from the source material, in effect, providing wide range of tonal options for the preamplifier. Like the original Portico Silk, the Silk Red/Texture works by reducing negative feedback on the output transformer and adjusting the frequency response to more closely resemble Mr. Rupert Neve’s vintage designs. With the 511, the Texture control allows these techniques to be pushed further than previous designs, adding about 10 times the desirable THD of the original silk control at its maximum setting.

The 5012 was meticulously designed to produce as little noise and non-harmonic distortion as possible. Carefully implemented signal paths and Class-A operation are a large part of the 5012′s sweet, whisper-quiet performance.

All Portico modules use input and output transformers and almost entirely discrete component amplifiers. In fact, the line amplifiers are capable of enhancing the sonic quality of many signal sources, especially those of digital origin. These are some of the factors that enable the Portico 5012 to work so unobtrusively within the context of a very high-quality audio chain.

While some engineers tout the transparency of transformerless designs, if you’re not careful, they also can make pretty good radio receivers when connected to a long cable (which acts as an antenna). Plus, the galvanic isolation prevents hum and noise from ground loops etc.

To correct these issues, input and output circuits must be freed from ground dependence so that only the wanted signal enters and leaves the processing path. Transformers are the ideal solution. The sweet and silky sound of Mr. Neve’s classic designs was achieved with big transistors and large high quality transformers. Rupert Neve Designs’ Portico modules achieve similar quality today without the bulk or the cost.

In order for modules to work together as would be expected (i.e. in a proprietary console configuration) without producing hum, R.F. interference, or other interactions, the connecting interfaces, grounding, levels and impedances must receive careful attention. Each Portico module is a complete integral signal processor that delivers its specified performance independently.

Rupert Neve: “While creating functional 500 series modules is relatively simple, designing those modules to equal their non-500 series counterparts with the current, voltage and space restraints is quite challenging. In creating our own 500-Series Modules, we experimented with a number of different transformer and circuit designs to achieve the same presence and sweetness found in the Portico Series of modules. The result of these efforts is that outside of the slightly lowered headroom, our 500 series modules are nearly indistinguishable from standard Portico Series modules, and are perfectly suited for studios of the highest caliber.”

OUTSIDE THE BOX—Rupert Neve Designs 511

With a rugged, magnetically shielded powder blue coated chassis, the front panel of the 511 has the following controls:

The Rupert Neve Designs 511 mic pre gives you the transparency of the Portico series and the transformer saturation of the classic Neve preamps in a 500-series format that anyone can afford. For more information, call or chat online with your Westlake Pro Sales consultant today.