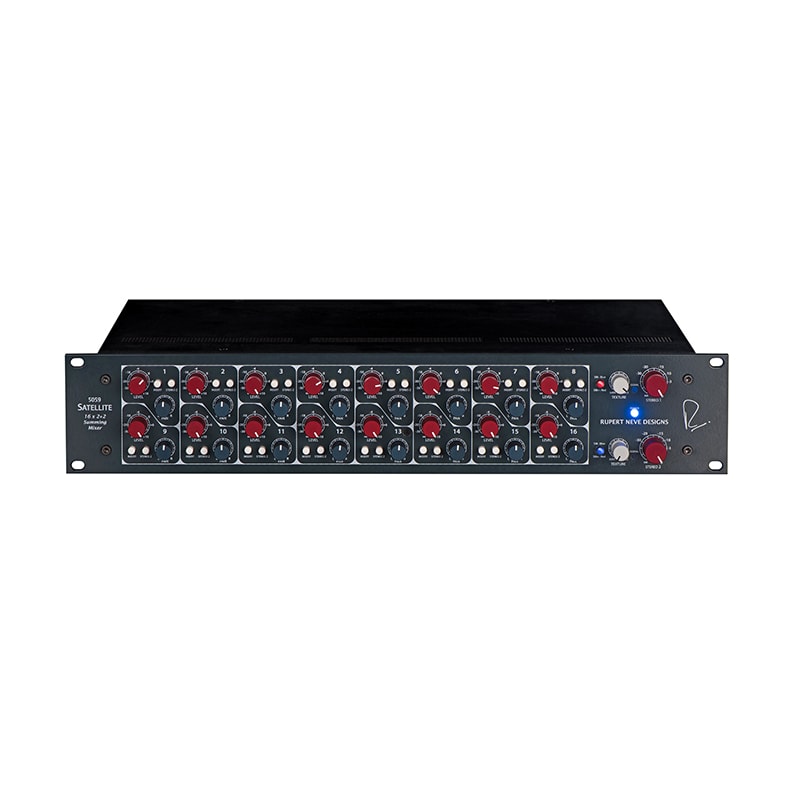 Built with Class-A circuits and custom transformers made famous with the 5088 mixer and Portico II Series, the 5059 is designed to deliver the ultimate out-of-the-box sonics and ergonomics in a 2U, rack-mountable chassis

The 5059 Satellite summing mixer isn’t simply a resistive network with a couple of preamps for output gain. Along with the legendary warmth and presence of a Rupert Neve design, it features 16 channels with individual level, pan, inserts, stereo-bus sends, and master texture controls. Providing easy integration with outboard, the 5059 also has two pairs of stereo outputs, giving you total control of two separate stem mixes. It also features Mr. Neve’s Silk and Texture controls, enabling you to dial in vintage character via high-frequency Red and low-frequency Blue modes. The 5059 Satellite Mixer infuses tracks with the same sonic heritage as classic Neve mixers used to create countless hit records.

The legendary sound of Neve

The most important element of the 5059 is its legendary sound. The keys to the sonic prowess of the 5059 are the custom transformers and true class-A topologies found within. The ±24V class-A topologies in the 5059 have been fine-tuned over a number of years to provide exceptional sonic performance and completely eliminate cross-over distortion. When combined with Mr. Rupert Neve’s transformer design and implementation, the 5059 achieves a remarkable purity, while also conveying the signature warmth and larger-than-life sound reminiscent of Rupert’s classic designs.

One drawback to mixing “in the box” is the inability to use high-quality analog outboard equipment. Channel inserts are provided in the 5059 to streamline connection with outboard equipment and enable further expansion of the 5059’s capabilities. By connecting a second 5059 to the insert outputs of a 5059, the dual stereo outputs can be used as a way to add 4 auxes to each of the 16 channels. When used with the 5060 Centerpiece, which gives you a mini 5088 console, the 5059 can create and mix stems into the main stereo inputs on the 5060.

From clean to colored and everywhere in between

Continuously variable Texture controls with Silk and Silk+ modes let you fine-tune the harmonic ratio and tonality of each stereo send of the 5059, or leave each mix pristine. The Silk mode accentuates the transformer saturation in the high frequencies to add sparkle to tracks. The Silk + mode accentuates the saturation of the low frequencies to add thickness and density to any source, which is especially useful for dry, somewhat anemic mixes. Unlike EQ, the texture control saturates the output transformers, adding musical harmonics to the source material according to the amount of texture applied.

Mic outside the box with the legendary character of Neve consoles. Order a Rupert Neve Designs 5059 Satellite Mixer today. For more information, call or chat online with your Westlake Pro Sales Consultant.

With classic tone and incredible sonic purity, the 5059 sets the standard for rack-mountable summing mixers.

Continuously variable control for Silk Red and Blue modes allows the engineer to fine-tune the harmonic ratio and tonality of both stereo outputs.

Beyond providing galvanic isolation, the custom Rupert Neve Designs transformers in the 5059 are a key ingredient to its larger-than-life sound.

Split the input channels into two stems for further processing and mixing, with independent Silk controls.

Individual-level controls are provided for each channel from -∞ to +10dB.

Individual pan controls are provided on each channel with a 3dB pan law.

Individual Insert sends and returns are available on each of the 16 inputs. The insert returns may also be used as a secondary selectable input. The sends are always active, and can be used to mult the input signal to a secondary destination.