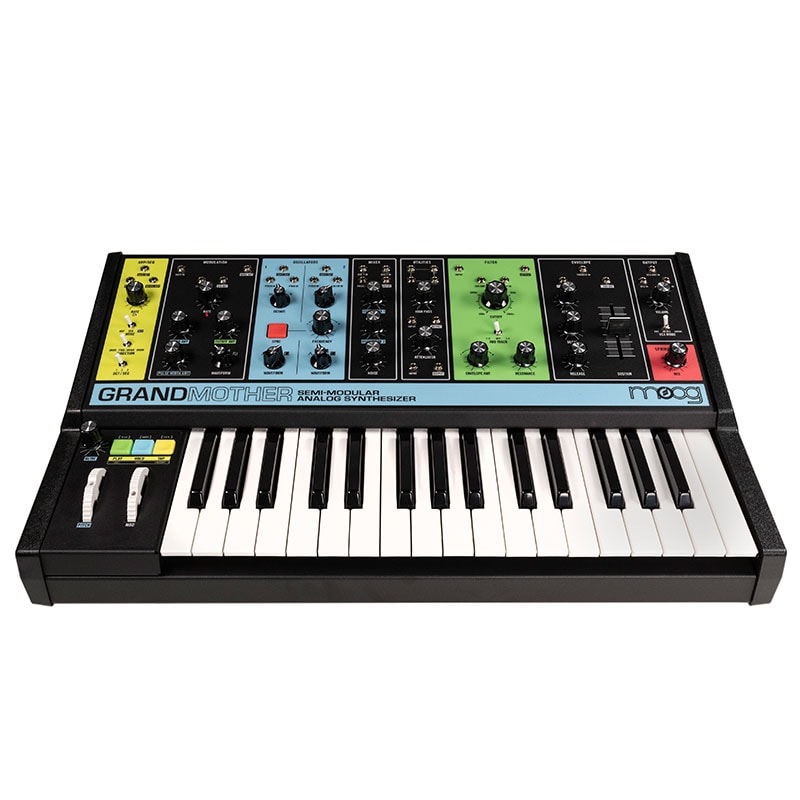 The Sound of Moog’s Modular Returns!

Trace the roots of Moog’s Grandmother semi-modular analog synth and you’ll be impressed to see much of her sound is taken directly from some of Moog’s earliest designs – Moog’s 900 series modular synthesizers.

True to this heritage, the Grandmother has a rich, warm sound and is capable of a huge range of experimental sounds once you start exploring the numerous patch points across its faceplate. Thankfully, Grandmother’s semi-modular design allows you to start shaping sounds before you even touch a patch cable! The intuitive controls and inviting layout will instantly draw you into any sound you create, and the real, built-in spring reverb tank will wrap every patch in a thick, warm and juicy blanket of analog sound.

The Moog Grandmother is an analog synthesizer with a built-in arpeggiator/sequencer, and a spring reverb tank that’s primarily designed for discovering sounds. Being semi-modular, the patch points offer infinite possibilities. Exploring the sonic contents of the Grandmother are available for players of every level with simplicity as an integral part of its design, as there is no patching required. Having an input for external sources, it is also an ideal audio processor for external sources. The Grandmother is the perfect synthesizer for sonic inspiration and discoveries, all packed in a flexible semi-modular, 100% analog sound.

Moog Grandmother In One Take

The two oscillators equipped can be set to one of four wave shapes: Triangle, saw, pulse, and narrow pulse. Both oscillators include three patch points independent from one another: Wave Out, Pitch In, and Pulse Width Modulation In. The second oscillator has a pitch control for expanding the size of your signal, or for some extra fattening when engaging hard sync. Additionally, each oscillator can be set to one of the four-octave settings, and the second oscillator has one octave of higher range.

The filter section in the Grandmother is designed to easily discover both a simple or extremely complex filter sound thanks to the intuitive design. In classic Moog style, the Grandmother is equipped with a 4-pole 10Hz to 20kHz ladder filter, as well as envelope amount and resonance controls. If patched, a 1-pole high-pass filter is also available. Another sophisticated feature on the filter section is keyboard track, which simply makes higher pitched notes sound slightly brighter, and lower notes slightly darker as they do on acoustic instruments. Patchable inputs and outputs are also available for external sources, as well as an Envelope Input Amount patch point, infinitely broadening all potential filter sounds.

The modulation section comes with four built-in waveshapes: Sine, sawtooth, reverse sawtooth, and square. When a square wave is selected, there is an additional control for pulse width amount. The other three built-in controls are Rate, Pitch Amount, and Cutoff Amount. Just like every other section on the Grandmother, there are patch points available, for this section they are Rate In, Sync In, Sample & Hold Out, Wave Out. Whether you’re patching or using the built-in features, the modulation possibilities are extremely flexible and only limited to one’s creativity.

When in arpeggiator mode, the Grandmother will play all pressed down notes in a selectable order. When in sequencer mode, the grandmother can store up to 256 steps per sequence, with each step programmable to being either a rest, note, accented note, or a tied note. The Grandmother can be switched between arpeggiator mode and sequencer mode with its designated Mode switch, which also includes a Rec position, allowing sequences to be punched in and actively tracking note input during playback. The rate knob sets the speed of either the arpeggio or sequence, with an accompanying LED for visual representation. The rate can also be set externally via MIDI, external clock, or tap tempo. The Octave switch is responsible for programming your arpeggios anywhere between one to three octaves. DIRECTION is responsible for choosing whether your arpeggios or sequence ascend, descend, play in the order the notes were pressed or played randomly. The Play, Hold, and Tap buttons located on the Left-Hand Control section also work in conjunction with the arpeggiator/sequencer.

The Envelope on the Grandmother is a classic analog ADSR envelope with a slight twist: The sustain control is a fader. This allows the player intuitively to view the sustain as the level of their signal, and the rest of the envelope as the dynamic behavior encompassing their sound. The output patch points included on the envelope section are, +Envelope in, and -Envelope Out, meaning that there are outputs of the envelope available both in or out of phase of itself. The last patch point available on the envelope is a Trigger In, which will allow the envelope to re-trigger in response to an external signal.

The Utilities section expands the overall flexibility and sonic capabilities of the Grandmother. There is a four patch-point mult section, all wired together in parallel. Inputs and output patch points available for the built-in -6dB/oct high pass filter. Additional input and output patch points are available with an attenuators control, used to reduce the strength of a control signal.

The mixer’s built-in controls allow you to set the blend between either of the oscillators, as well as white noise. Additionally, there are four patch points available: Osc 1 In, Osc 2 In, Noise In, and Output for sending your combined signals to an external source. When either of the inputs is patched in the mixer, the originally designated oscillator, or oscillators, are taken out of the signal path. Similarly, when an external source is patched into the Noise In, the built-in noise generator is taken out of the signal path.