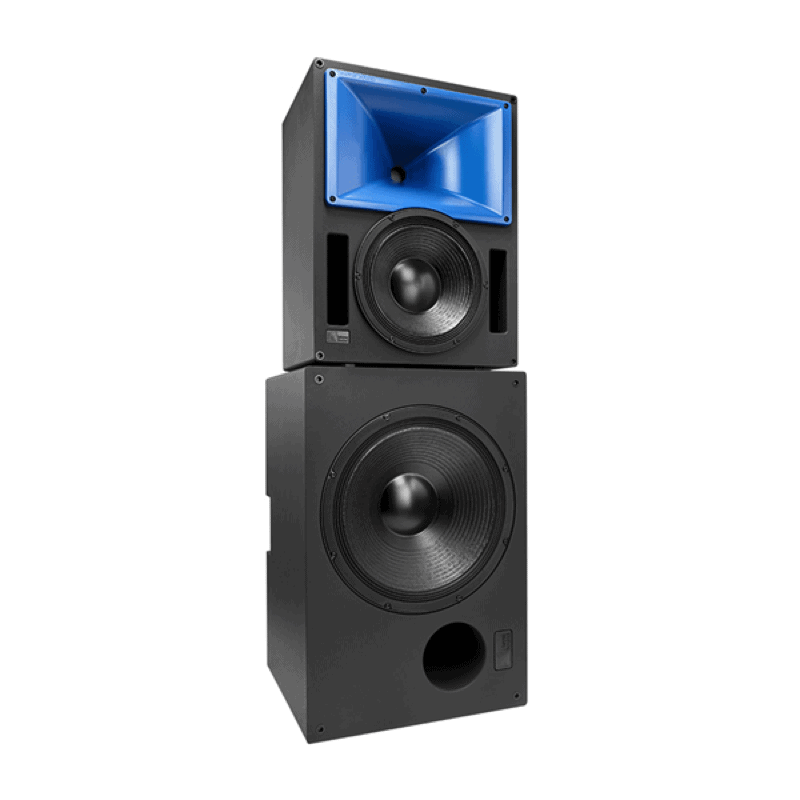 Real-world audio electronics and physics often find themselves at odds, particularly when it comes to loudspeaker reproduction. One major area of focus in loudspeaker response is phase coherency—specifically, the time at which various frequencies show up to the party—there is no fashionably late in this case, just phase cancellation. Acoustical engineers and pro audio designers have theorized that a linear phase response beyond 20kHz has a pronounced effect in the audible spectrum, creating a greater sense of realism and spatialization. After six-plus years exploring that premise, Meyer Sound research confirmed that phase relationships in complex signals are critical not only in resolving subtle details and timbral nuances, but also in reproducing an almost palpable sense of acoustical space. The result of those efforts is the Meyer Sound Bluehorn System, which has eliminated the tradeoffs and compromises inherent in loudspeaker design. The Bluehorn System achieves full-bandwidth monitoring with absolutely flat amplitude and phase response.

When reproducing complex sounds, pattern relationships matter just as much as amplitude and frequency. If one frequency band is delayed, or offset in relationship to the others, phase shift occurs. A signal that’s -3dB at 25kHz can exhibit a measured in-band phase shift of roughly -50 degrees (10kHz)! When the -3dB point is extended to 250kHz, in-band phase shift is reduced to less than 1 degree. Perfectly linear acoustical output requires phase re-alignment of the input signal. But thanks to the laws of physics, even the most accurate acoustic systems have introduced phase anomalies—until the arrival of the Bluehorn System.

Unique to Bluehorn is the dedicated and highly advanced DSP module processor that sits in front of both the mid-high loudspeaker and the companion low-frequency cabinet. Proprietary phase-correcting algorithms model system behavior and restore original frequency band relationships, while introducing minimal latency.

The system-specific correction algorithms hosted by the processor were developed by meticulously analyzing all physical and electrical nonlinearities throughout the entire system, from 25Hz to 20kHz, in order to bring acoustic output at any level into absolute phase and frequency alignment with the input signal. Essentially, the processing nullifies the nonlinearities of drivers and enclosures, resulting in a phase-coherent response previously achieved only by open-air electrostatic headphones with their extremely low mass diaphragms.

The accuracy, detail, and uncanny sense of three-dimensional acoustic ambience at any output level are well beyond conventional monitoring systems. Yet the Bluehorn System has no “sound” of its own. It’s not designed to modify or color the sound in a way that might be pleasing to some listeners. It has no distinctive acoustical characteristic, no built-in “room sound.”

Practiced listeners have been unanimous in their praise. One leading Hollywood scoring mixer, who used a Bluehorn System for a recent major release, remarked that “for the first time I’m hearing exactly what I’m recording.” Other studio professionals have commented on the wide sweet spot and the faithful reproduction of complex midrange information, such as acoustic grand piano.

The Bluehorn System is designed with acoustic transparency in mind: Advanced driver mechanics and alignment technology, along with precision tuning, minimize phase anomalies that can color your sound. It all adds up to unprecedented accuracy and detail. Externally, Bluehorn shares the same cabinet footprint, driver dimensions and waveguide configuration as Meyer Sound’s Acheron Designer loudspeaker. On the inside, however, Bluehorn utilizes an upgraded HF driver and new amplifiers with ultra-low noise and distortion.

Bluehorn is designed for high-resolution monitoring in mid-sized rooms. Applications include music recording, cinema post-production, music mastering, or any other critical monitoring task that requires impeccable accuracy in sound reproduction.

What the pros are saying about Bluehorn

In his cinema work, John Powell first used the Bluehorn Systems for mixing music for Jason Bourne, the latest in the Bourne-series of spy thrillers.

“For the work that I do, I need monitor loudspeakers that do not flatter the music at all. I need to hear exactly what is going on in an unbiased way. I have no time when working to enjoy what we did right; I need to hear when things are wrong so we can fix them, and I can hear those problems better with the Bluehorns. I need to be confident that everything is in its proper place, because then the music translates smoothly as we move through to the final mix.” — John Powell Film Composer

With the Meyer Sound Bluehorn System, there are no tradeoffs or compromises—just the sound you recorded, exactly as you recorded it. For more information, call or chat online with your Westlake Pro Sales Consultant today.