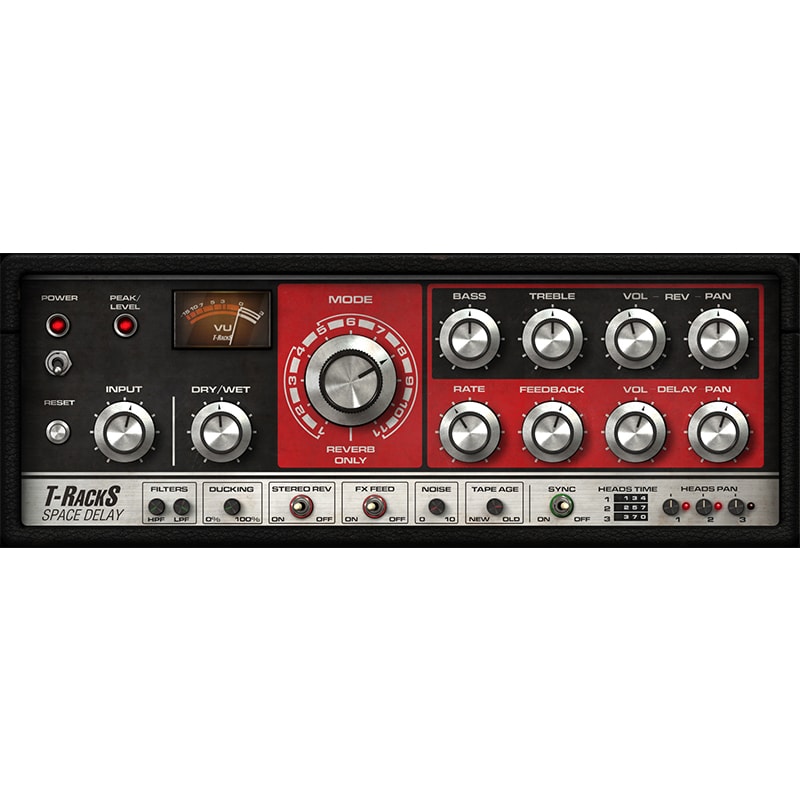 Tape echo offers a unique sonic signature, and perhaps no unit offers a more recognizable sound than the Roland RE-201 Space Echo. Now you can enjoy the endlessly Gexible controls and the instantly recognizable organic sound of this classic delay unit, captured with an unprecedented level of detail in the T-RackS Space Delay.

First produced in 1974, the RE-201 offered 3 playback heads, variable speed motor and onboard spring reverb. Its 12 operating modes offered a massive range of warm, rich analog soundscapes for music production and sound design.

The limitless potential, ease of use and incredible sound made it a favorite of artists across the globe and in countless genres, from Bob Marley to Brian Eno, Pink Floyd to Portishead, Sublime to Sonic Youth, Randy Rhoads to Radiohead, heard on literally thousands of songs and still in high demand today.

Using the same mix of dynamic convolution and physical modeling as IK’s Tape Machine Collection, the T-RackS Space Delay captures the sound of this iconic effect, down to the -nest detail.

Analog tape-based systems are highly complex, adding a special musicality and magic to the material derived from the interplay of several interdependent factors. It took IK two years of full-time research to develop IK Multimedia’s award-winning T-RackS Tape Machine Collection, and the added variables of Space Delay required bringing this process to a new level. Like the Tape Machine Collection, creating the Space Delay began with an original unit fully restored to pristine “factory spec” condition. Every element of the design was then carefully analyzed, inspected, and measured to create a precise physical model of every circuit, from the preamps to the playback heads. The resulting physical model works in symbiosis with a powerful dynamic convolution, updated to capture every nuance of the spring reverb and other elements of the sound. The end result is a breathtaking -delity to the original unit.

Stereo operation: Pan each of the 3 playback heads and the spring reverb separately for immersive stereo soundscapes.

Ducking: Create dynamic echo effects or cut through even the most crowded mix with this convenient ducking feature.

Lo-Fi effects: With control over unit noise and tape age, you can easily add extra grit and grime to your tracks for more vintage sound.

Like all T-RackS plug-ins, the Space Delay offers you two ways to work: as a stand-alone plug-in, or inside the T-RackS 5 shell. Use these together with any of the other T-RackS processors to mix and master faster than ever creating a powerful, lightning-fast workGow. The T-RackS shell offers a unique modular system with up to 16-processor chains, series & parallel routing, easy A/B/C/D comparison, up to 192 kHz / 32-bit Goating point processing and much more, in both a plug-in and standalone mastering application.