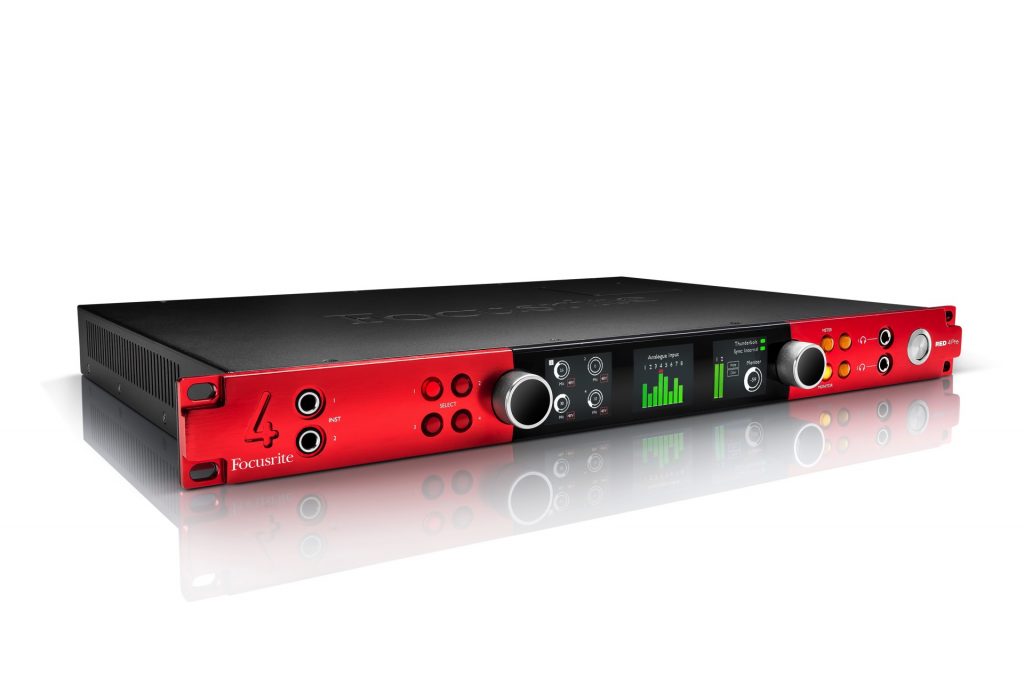 Focusrite’s Red 4Pre is a high-resolution audio interface with 58 input channels and 64 output channels. The Red 4Pre features Thunderbolt 2 connectivity, which enables the lowest round-trip latency regardless of which DAW you use, enabling you to track and overdub with plug-ins and record virtual instruments in real time. A study in simplifying workflow, the Red 4Pre seamlessly integrates with Pro Tools | HD systems and other Avid interfaces via twin primary DigiLink connectors. Since the best things come in twos, the Red 4Pre is also outfitted with dual Thunderbolt 2 ports, which allow daisy chaining of additional peripherals such as hard drives and displays. The Red 4Pre is also equipped with dual Ethernet ports for high-speed, low-latency Dante audio-over-IP networking, letting you expand your recording capability up to 64 additional channels anywhere on your network. Dual Dante ports enable you to connect additional Red or other Dante-compatible components to provide additional channels irrespective of the interface used to drive the Red 4Pre.

The Red Evolution microphone preamps in the Red 4Pre are the latest incarnation and pinnacle of the renowned Focusrite Red range preamps. The Red Evolution preamps are designed to deliver ultra clean, transparent audio with an astounding –129dB EIN (Equivalent Input Noise), which in essence is the heat noise generated by components as electrons pass through them, and an equally astounding 0.0009% THD+N (Total Harmonic Distortion + Noise). The Red Evolution preamps have 63dB of gain for use with any kind of microphone. The Red 4Pre mic preamp can be digitally controlled for adjusting/recalling settings and stereo linking via Focusrite Control software.

Inheriting more than just the name of the Focusrite Red Range, they feature Focusrite’s unique “Air” circuit, a purely analog effect that emulates the sound of the transformer-based mic preamps of the ISA range, the foundations of Focusrite’s “Heritage Sound,” designed by Mr. Rupert Neve for George Martin’s Air studios. Air recreates the sound-shaping effect of the classic ISA transformer by using an authentic analog model of the original transformer-based preamp design. When Air is enabled, the microphone impedance is set to 2.1k ohm and the frequency response curve is given a subtle mid-high boost—all in the analog domain. Engaging Air reconfigures the three-stage preamp signal chain to switch in the correct transformer-style input impedance, followed by a linear gain stage, and finally inserting a passive frequency-shaping stage to recreate the tight low end and elevated high-end response, creating the effect described by audio professionals as the classic “Air” sound of the Focusrite ISA mic pre.

Focusrite has been building mastering-quality ADA converters for decades, and the converters in the Red 4Pre are the best Focusrite has ever made. Maintaining a balanced signal throughout the system, the converters use a parallel-path summing configuration to lower the noise floor. With high-performance, precision conversion chips and maximized sound quality through premium component selection, advanced design and optimized board layout, the Red 4Pre’s converter design strikes a precise balance between multiple factors—including dynamic range, distortion, noise floor and conversion latency—for the optimal overall sound. With 24-bit/192kHz sampling capability and 118dB A-D / 121dB D-A dynamic range, it is ideal for high-resolution audio.

The Red 4Pre delivers a frequency response flat from 20Hz to 35kHz ±0.25 dB or better and ≤0.0009% THD+N—and when Focusrite quotes a specification, you can be sure it’s what the Red 4Pre will actually give you on a real session, not a purely theoretical figure pulled from the converter chip’s data sheet. The incredibly low THD+N is an important factor in maintaining overall mix clarity as track counts soar. Focusrite pays as much attention to the analog side of the equation as to the digital, optimizing noise levels by keeping digital and analog components well apart and using multi-layer boards with internal ground-planes.

Parallel-path summing conversion uses two conversion chips in parallel to significantly enhance the signal-to-noise ratio. Using two converters in parallel and summing the result gives an increase in signal level of 6dB (as the two signals are in phase) while random noise is only increased by 3dB (since phase cancellation happens on average 50% of the time). The result: a net improvement of signal/noise ratio of 3dB. The Red 4Pre operates at standard sample rates up to 24-bit/192kHz, ideal for high-resolution audio (HRA), which generally refers to recordings made at 24-bit/96kHz (or 88.2kHz) resolution or better. All Focusrite interfaces can operate at these specifications. HRA is becoming increasingly popular, with music streaming and download sites offering high-resolution content. In addition, high sample rates offer the best option for archiving, which requires the best possible quality before being down-sampled to lossy formats. High-resolution playback is the wave of the future, and archiving music at the highest possible quality provides future listeners the best chance for an even better musical experience.

Dante is the audio networking system of choice for Focusrite products including the RedNet range of modules and the Red 4Pre multi-standard interface. Developed by Audinate, a Sydney Australia-based company, Dante is a hardware/software network protocol that delivers uncompressed, multi-channel, near-zero latency digital audio over standard Ethernet networks. Dante has the ability to pass through network routers and provide native gigabit support. Dante provides easy implementation and a cost-saving advantage for studios taking over existing infrastructure with multiple rooms. With Dante, audio can be sent anywhere over existing IT wiring. If changes are required, a single network or fiber-optic cable can carry multiple channels, making it possible to make infrastructure changes relatively quickly and inexpensively, without the need for major construction.

With Dante, you can connect up to 64 additional channels to the Red 4Pre via Ethernet-based networking. A single connection carries both audio and built-in clocking. Whether the Red 4Pre is connected to the computer via Thunderbolt, DigiLink, or Dante, simply connect Dante-equipped units such as two RedNet A16R (32 channels of analogue I/O), four RedNet MP8R (32 channels of RedNet mic pre), or other Dante-enabled products. Place mic preamps where the music is and outputs where the sound needs to go—wherever you have an Ethernet connection. Unlike daisy chaining via Thunderbolt, Dante lets you run additional channels over a greater distance, adding only 150μs of latency to the system, without wasting money on technology or connectivity that will not be used. To minimize time spent on system configuration, Dante makes networking a true plug-and-play process, allowing automatic device discovery and system configuration. Look for future enhancements of the RedNet series offering complete plug and play Ethernet expansion functionality.

With Dante, audio can be made available anywhere it is required, capturing or relaying a live performance or distributing audio to previously hard-to-reach or prohibitively expensive locations.

A professional-level audio interface with crystal-clear sound quality, the Focusrite Red 4Pre provides greater expansion capabilities than any other interface in its class. For more information, call or chat with your Westlake Pro Audio representative today.

Weights and Dimensions of unboxed unit

Weights and Dimensions of boxed unit