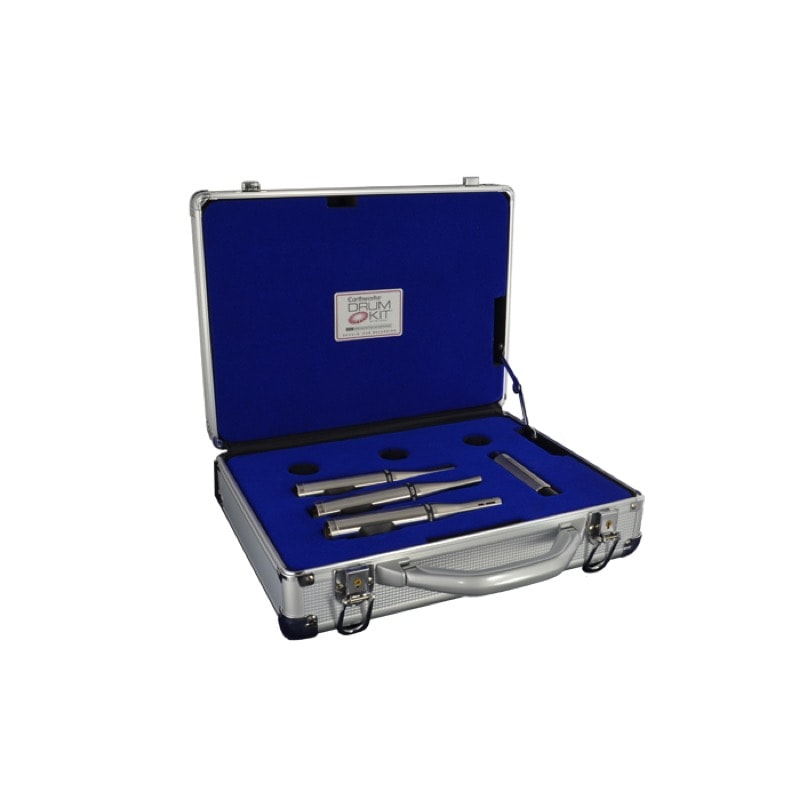 The DK25/R is for recording and has two TC25 omnis for overheads, an SR25 cardioid for kick drum, a KickPad™ and a windscreen. This model is ideal for use in an enclosed acoustic environment or in a drum room/booth.Drum microphones for recording. Includes 2 TC25 microphones, 1, SR25 microphone, 1 KP1 KickPad™, 3 microphone clips and rugged carrying case. TC25 overhead microphones handle up to 150dB SPL without distortion.

The Earthworks DK25/R DrumKit takes an minimalist approach to audiophile drum miking for purists who want to capture the realistic sound of drums performed in a great-sounding room. The DrumKit is a three-mic system, with two Earthworks TC25 omni condensers for capturing the “top kit” (snare, hat, cymbals, toms) in overheads, and an SR25 cardioid condenser for spot-miking the kick drum. Also for kick drum is Earthworks’ patented KickPad™, which optimizes the SR25 (or any mic) to capture the body and attack of a kick drum without the “woofiness.” The beauty of the system, apart from its stellar sound capture, is that it virtually eliminates any phase issues that you would encounter with the high-count multi-mic schemes often used in popular music, where the sound of the kit is literally rebuilt in the mix one drum at a time. The Earthworks DK25/R DrumKit is ideal for use in an enclosed acoustic environment or drum room.

Earthworks DK25/R DrumKit in one take:

David Blackmer, founder of dbx and Earthworks, two of the most influential and innovative pro audio manufacturers in the history of the industry was focused on created the world’s best loudspeakers. To accomplish that goal, he realized that he needed more precise test equipment than was available at the time. As such, he began his quest for perfect sound reproduction with the invention of a remarkable test microphone. In his research, Blackmer discovered that impulse response was a far more revealing indicator of a mic’s performance that simply measuring frequency response.

Impulse response indicates how fast a microphone can react to fast transients, such as a snare hit or cymbal attack. The positive-going wave, called compression, causes the diaphragm to vibrate. The speed at which the diaphragm resets to its zero point, in anticipation of the next attack is its settling time. A fast impulse response allows the mic to capture the full crispness and detail of attacks, while the fast settling time will allow you to hear subtle details in your recording previous not possible. The overall term for how sensitive a diaphragm is to compression and rarefaction of sound waves is “compliance.”

The microphones in the DK25/R have a transient response that is lightning fast, handling sharp attacks with ease, while still picking up all of the subtle nuances and softest dynamics of your playing. With a staggering SPL rating of 150dB, the TC25 overheads have more than enough headroom to handle even the loudest drummers, without distortion. Along with the high SPL-handling, the omni pattern has no proximity effect, so you can get the TC25 as close as you want to the loudest sound sources. Its polar pattern is consistent across all frequencies, simplifying mic placement, virtually eliminating phasing issues and ensuring more gain before feedback.

While most of the mics used for kick drums are purpose-built for that task alone, Earthworks saw no reason to limit versatility. Toward that end Earthworks created the KickPad, and inline attenuator/EQ that can optimize the response of any microphone for kick drum capture. Simply plug the KickPad into the cable feeding the SR25 (or other cardioid kick drum mic) and it’s instant kick drum sound every time. With the KickPad removed, you can use the same SR25 for most anything. A passive device with XLR I/O that can be used with either condenser or dynamic microphones, and can be used for both recording and live performance applications.

All three of the microphones in the DK25/R DrumKit will provide stunning results on a wide variety of instruments and vocals. As an added bonus, the KickPad will improve the sound of other popular kick-drum mics as well.

The Earthworks DK25/R DrumKit system not only provides engineers with a dedicated audiophile drum-miking solution, it’s component mics can be used to attain stellar results for myriad applications. For more information, call or chat online with your Westlake Pro Sales Consultant today.