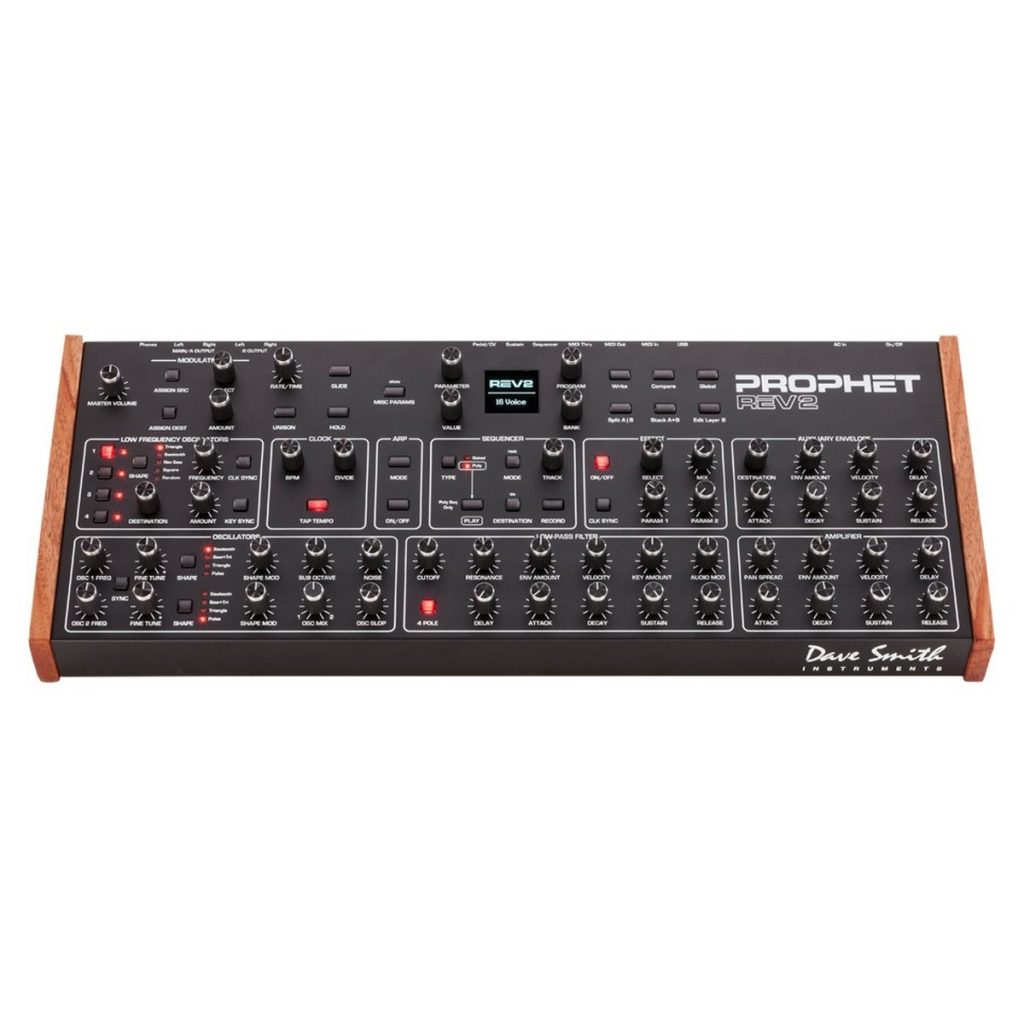 The Prophet Rev2 is the reimagining of the Prophet 08, one of the modern classics of the synthesizer world. The smooth, lush sounds of Sequential synthesizers are available in an analog unit with a plethora of features that can keep one tone searching for hours. A newly integrated pulse-width modulation control is equipped which will work on any wave shape, making the Rev2 especially flexible and innovative. In addition to having every common desirable feature in a synthesizer, it can have up to a whopping 16 voices. Whether you’re creating a complex modulating arpeggio, or a simple soft pad, finding a sound is going to be easy and it will sound as beautiful as every Sequential synthesizer.

Prophet Rev2 In One Take

Per voice, the Prophet Rev2 has two oscillators, a sub oscillator, and a noise generator. The base frequencies for either oscillator can be set anywhere between 16Hz to 8kHz, and both also offer a fine tune control for maximum accuracy, whether you want a very pure, or chorused tone. Additional features are hard-sync, as well as portamento, which can be programmed to a different rate on either oscillator.

The Rev2’s modulation is as simple as picking a source, destination, and setting the amount of modulation. There are 22 different modulation sources, and 53 different destinations packed in an eight-slot modulation matrix. Additionally, there is also a modulation wheel, aftertouch, velocity, breath controller, and a footswitch to further expand modulation possibilities.

The LFO section while fairly simple, in true Sequential fashion, is still very flexible. Triangle, sawtooth, rev-sawtooth, square, random shapes are available, and programmable to any of the extensive features and are also available is key sync.

Equipped in the Prophet Rev2 is a low-pass filter that is switchable between a 12dB per octave cut, and a 24dB per octave cut. Other than your basic filter controls, also featured are less common controls that offer even more sonic flexibility. These include a controller which lets you decide how much of the first oscillators signal is used to trigger modulation, and a resonance control that will self oscillate when set at maximum with the 4-pole filter engaged. Consistent with Sequential’s theme of abundant features, the filter has a dedicated five-stage envelope generator (DADSR), as opposed to the traditional four-stage envelope.

The Prophet Rev2 is packed with 13 individual effects: delays, phasers, flangers, a distortion, high pass filter, reverb, chorus, and a ring modulator. Each effect can then be modified by two controllers, which change based on which effect is selected, and also be synchronized to tempo. For further flexibility, each layer can have a different effect, or the effects can be set on the overall sound.

The amplifier section, like the filter section, has a five-stage envelope generator. This is one extra stage compared to traditional envelopes, which adds a ‘delay’ control before the rest of the other controls. Having the ability to delay the envelope is a great way to add more interesting textures, movement, and in certain cases, realism to signals.

There are two different built-in sequencers in the Prophet Rev2. One is a 64-step, 1-track polyphonic sequencer, in which you can play up to six notes per step. The other is a 16-step, 4-track Gated Sequencer which provides four 16-step sequences that play in parallel. The Gated Sequencer may be routed to individual parameters, making it an excellent tool for creating complex, evolving modulations. Each step can be modified either on the actual synth, or in the accompanying software via USB connection. Programming the sequencer is as easy as pressing record and playing the sequence, and controls such as tempo, and programming ties and rests are always easily modifiable. Additionally, having four LFOs that can modulate sequence parameters, and having the ability to program different sequences on different layers renders sequencing options infinite.