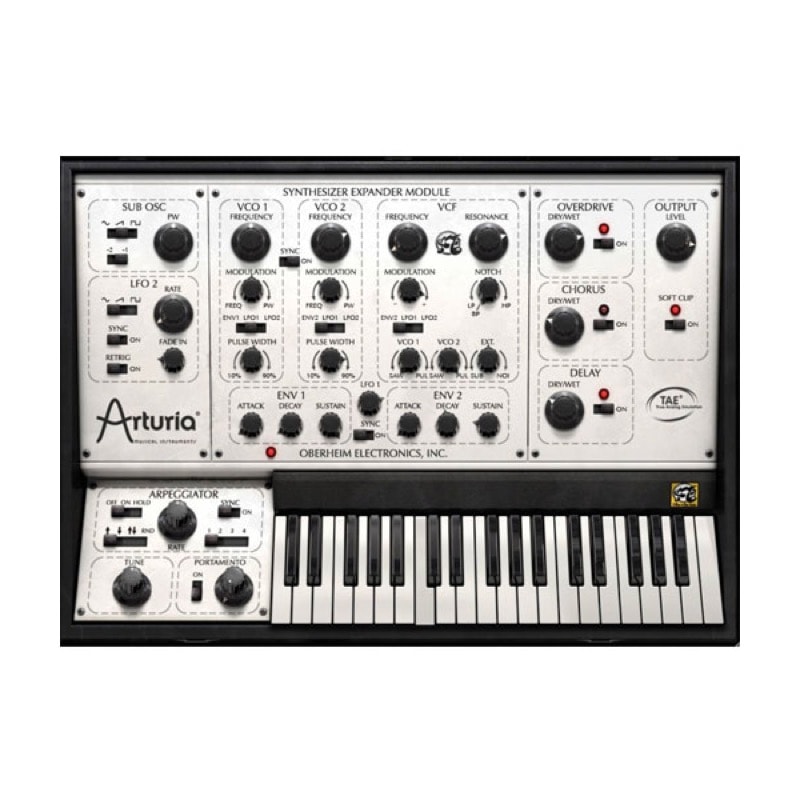 A giant has returned to life. Oberheim’s legendary SEM – Synthesizer Expander Module – is back for the first time as a high-end software emulation powered by Arturia’s exclusive TAE® technology.

Favored by top artists and producers such as Goldfrapp, Herbie Hancock and even John Carpenter for its fatness and unique harmonic spectrum, the Oberheim sound is an absolute must have for your studio.

Throughout the early 70’s, Tom Oberheim quickly gained a reputation as a talented effects manufacturer. His company Oberheim Electronics notably engineered the Maestro Ring Modulator and Phase Shifter which had a huge success on the US market.

After gaining experience as an official dealer for ARP Synthesizers in Los Angeles, he showed the Synthesizer Expander Module (SEM), that he designed with the help of Dave Rossum of E-mu Systems, in May 1974 at the Audio Engineering Society Convention in L.A.

The SEM was one of the world’s first self-contained synthesizer modules. It was primarily developed as a convenient solution for musicians who wanted to set up sequences without tying up more valuable synths. The SEM also worked very well as an expander to fatten up the tone of other synthesizers like the Minimoog or the ARP Odyssey. Soon the SEM gained a popularity of its own, thanks to the unique sounds generated by its innovative multimode Filter.

Upon this success, Tom expanded its concept by creating polyphonic synthesizers that were in effect combinations of the SEM with a digital keyboard in one carry-case. Besides the OB series, Oberheim extended its line with popular digital synthesizers such as the Matrix 6, 12 and 1000.

In 1985, Oberheim Electronics closed, however. Its brand and some of the products are continued by Gibson Guitar Corporation. But to the joy of synth enthousiasts, Tom recently restarted producing hand-made updated SEMs and has announced the release of a successor to his original 4-voice.

The original SEM has particular characteristics for which it was loved by many musicians to this day. The Arturia SEM V brings back the sound and special characteristics in an accurate virtual emulation.
The SEM V modules were entirely redesigned after the most recent evolutions in TAE®, Arturia’s proprietary technology that recreates analog modules after their detailed electronic circuitry.
The result of this lengthy project is a faithful virtual instrument that delivers the same acoustic properties as the original.

Oberheim
Oberheim
Oscillators :
Like all components of the SEM V, the two oscillators were recreated by respecting 100% of the properties of the original circuit. They replicate the exact sawtooth and variable-width pulse waveforms present in the original.
On a control level, the SEM V interface also duplicates the behavior of the dual-concentric knobs for coarse and fine-tuning, this last parameter being easily accessible via right-click.

Filter :
The 12dB/octave multimode filter is one of the most remarkable modules in the SEM.
In many ways, it helped define the sonic identity of Oberheim because it shaped a diverse range of sounds that were almost impossible to get on other synthesizers.
The SEM V carefully models the four modes of the filter (low-pass, high-pass, notch and band-pass) with attention to detail, meaning that you can either switch to bandpass or sweep through the other three modes by turning the knob clockwise.

ADS Envelopes and Modulations :
The particular response of the ADS envelopes is accurately reproduced, as well as the VCF Mixer, Modulation knobs and switches, allowing you to nail any of the classic SEM tones.
Division cadre
WHAT WE ADDED

The SEM V adds a few tricks to the original model, that considerably increase the sonic possibilities and allow the demanding musician to push the boundaries of the Oberheim sound a little further:

Jupiter
Polyphony and 8 Voice multitimbrality inspired by the 2, 4, and 8 voice models
White Noise, to mix into your etheral pads and FX sounds
Sub Oscillator with sawtooth and sine waves, for added growl and bottom end
LFO 2 with sine, sawtooth and square waves, for more complex modulations
Professional Effects (overdrive, Delay, Chorus), to directly process your sounds on-board
Arpeggiator, for instant basslines and inspiring melodic patterns
Portamento to unlock more expression in your playing

The intuitive Keyboard follow lets you draw modulation curves on the fly. You can map up to 6 parameters of your choice, guaranteeing a maximum expression of playing on your MIDI keyboard.

Inspired by the multi-timbrality of the Oberheim 2, 4 and 8 voice, the Voice Programmer is a powerful module on which you can edit no less than 7 additional virtual SEM voices.
Unlike the repetitive manipulations on hardware SEM, the Voice Programmer makes programming a breeze thanks to its ergonomic interface. Whether you want to play spectral pads or complex sequences, this module will allow you to reach amazing sonic results in no time.

The SEM V Modulation Matrix offers 8 simultaneous modulations which you can set between 8 different sources and more than 25 destinations.

With its polyphonic capability, Arpeggiator, Voice Programmer, Modulation Matrix and effects, you can create an incredible array of sounds, all while keeping the ease of use and true sound of the Oberheim SEM architecture.
Division cadre
What you can do with the SEM V

The SEM V is a powerful instrument capable of producing a wide range of warm analog sounds.

Reproducing the unique SEM architecture, with its oscillator sync, characteristic filter shape and specific envelope response, the SEM V is able to generate the fat basses that have made the Oberheim brand so popular. Thanks to its simple and clever PW and pitch modulations, it is also very easy to produce moving and lively leads.

Its remarkable 12 dB/oct multimode filter is a real blast from the past, becoming an awesome weapon in the context of current electronic music. This unique module can instantly tailor your sound to fat, crisp, or spectral textures with access to all the nuances in between…

But you can do a lot more!

The added polyphony and multitimbrality will allow you to step into the world of deep pads, warm brass and complex sequences, which are characteristic of the late 70’s Oberheim SEM-based synthesizers : the 2, 4, and 8 voice.
Your SEM module is basically given the strength of 8 SEMs!
Thanks to the ergonomic Voice Programmer module, setting each SEM voice is much faster than on hardware, and will bring you unique sonic results. Completed by the Keyboard Follow and the Modulation Matrix, the expression of playing is increased tenfold.