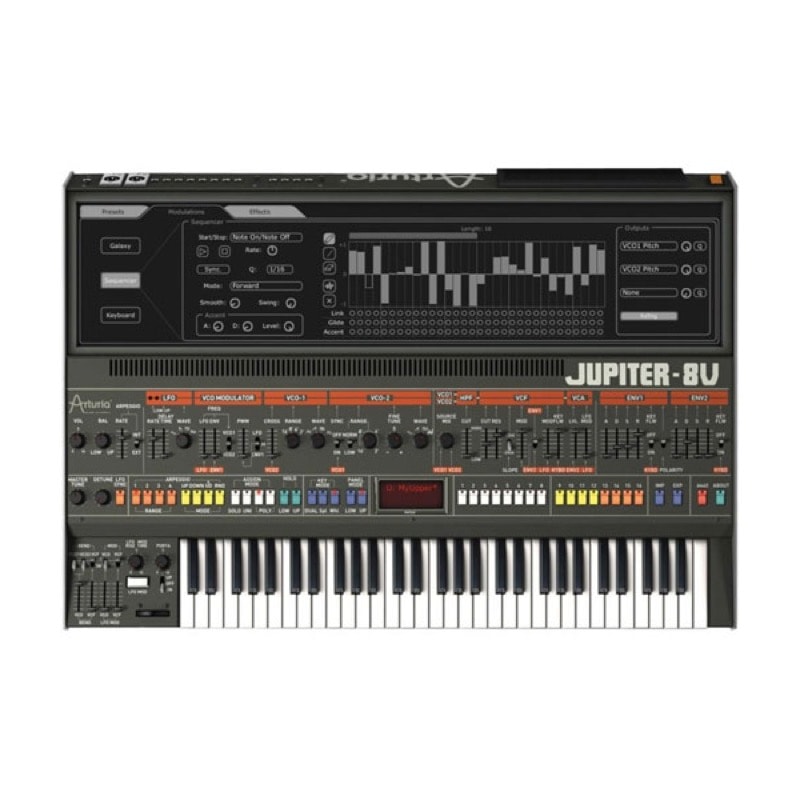 The Jupiter-8V is the newest addition to the family Arturia’s analog synthesizer recreations. Offering the unique sound palette of the Roland Jupiter 8, this virtual version is a sound designer’s dream.
Based on the latest version of TAE®, the Jupiter-8V also offers a host of modern features: an advanced step sequencer, a new line of dynamic effects, a module combining LFO’s (called Galaxy), and lots more.

Back to the early 80’s, the Prophet 5 and Oberheim OB series dominated the polyphonic synthesizer market. Having that in mind the Jupiter-8’s success, initiated in 1981, took every one by storm.

But what made the Jupiter-8 so successful? Well, in terms of sonic possibilities, it complemented its competition by bringing something different. The Jupiter-8 was capable of creating very versatile sounds. You could easily make ‘fat’ or ‘Crystal’ sounds with it. In fact, the Jupiter-8 sounded the way it looked, ‘sleek and polished’.

The electro-pop community became quickly convinced by the qualities of the Jupiter-8.’Relax’, by Frankie Goes to Hollywood was produced incorporating a Jupiter 8, and players such as Vince Clarke, John Foxx, and Martyn Ware were also using it. The path to classic status of the Jupiter started there. Other artists that have used The Jupiter-8 include Tangerine Dream, Underworld, Jean Michel Jarre, Depeche Mode, Prince, Gary Wright, Adrian Lee, Heaven 17, Kitaro, Elvis Costello, Tears for Fears, Huey Lewis and the News, Journey, Devo,Freddy Fresh, Simple Minds, Jan Hammer and BT.

AN ACCURATE RECREATION OF THE ROLAND JUPITER-8

The legacy of the Roland Jupiter synthesizers is due to their unique voice architecture and design, creating sounds that were so unreal that they have to be heard. For many musicians no other synths in the world can create analog sounds as cool and as authentic as these.
The Jupiter-8 offers a very interesting combination of a high-pass non resonant filter and a low-pass resonant filter.
The arpegiator and the keyboard split make it a remarkable performance keyboard.
Fast envelopes and precise oscillators confer to the Jupiter-8’s sounds its famous versatility.

You can easily make ‘phat’ or ‘Crystal’ sounds with it.

With the Jupiter-8V Arturia brings this magic back while adding a new generation of features opening a unique and contemporary sound palette:

The Galaxy allows the user to choose from different LFO types and intertwine them together into a single unique modulation source, giving a new evolving element to the sound of the Jupiter 8.

The Jupiter’s step sequencer is also an assignable modulation source, which allows for easily generated patterns to be used to control the many interesting parameters of the sound.

In addition to the step sequencer and Galaxy modulation sources, each voice now has its own suite of creative effects, which can be inserted into the main synthesizer signal path in each voice. Key parameters from each effect can be modulated by chosen sources, adding a new contemporary dimension to the traditional subtractive synthesis sound of the original Jupiter 8.