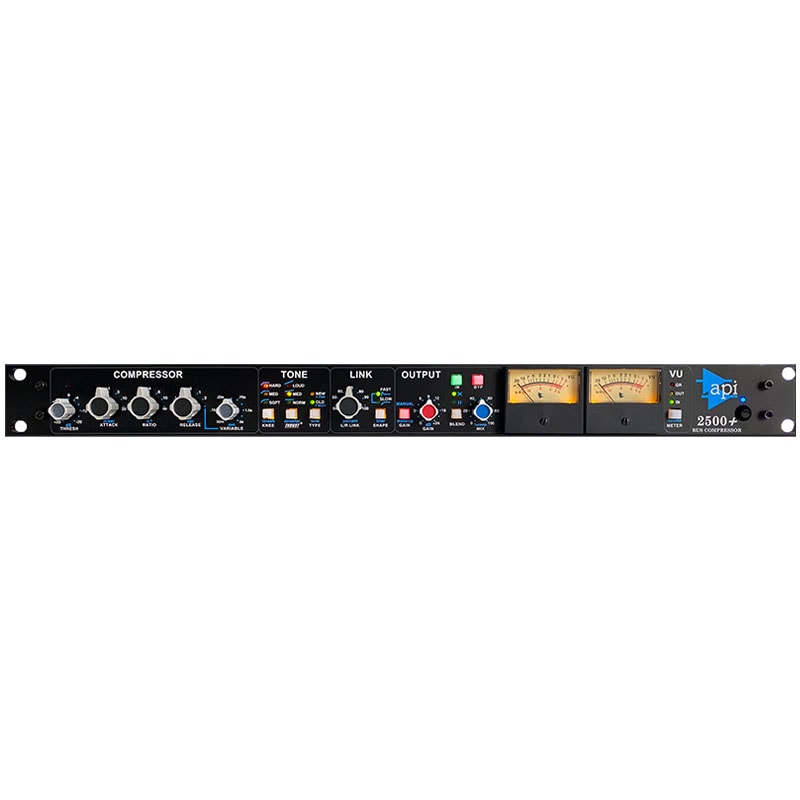 Since its debut in 2002, the API 2500 has become the ‘go to’ Stereo Bus Compressor for mixing engineers worldwide.  Offering an exceptionally wide and true stereo image, the 2500 is famous for its signature tone and analog warmth. In an age of sterile digital sound, the 2500 enhances mixes across virtually all musical genres, from classical and jazz to pop and rock.

Not surprisingly, the 2500 has found a home in the live market as well, with a large percentage of tours carrying one or more 2500 Stereo Bus Compressors for main, subgroup and monitor mix buses. With the standard for live sound now being digital front of house and monitor consoles, the 2500 has been proven invaluable in providing punch, fat bottom end and warmth.

While retaining all the functional and sonic characteristics of the original 2500, the 2500+ adds several additional design parameters that have been carefully incorporated into the original unit. The result? The same great API sound with an enhanced feature set including:

The API 2500+ Stereo Bus Compressor allows adjustment of sonic qualities to alter the punch and tone of the stereo mix. The 19-inch, rack-mountable unit features a dual-channel design that can be configured for stereo compression or for use as two separate units via a single compression setting.

Among the many qualities which make the 2500+’s unique is its use of API’s patented THRUST circuit for a chest-hitting, punchy bottom end. Another distinctive feature of the 2500+ is its selectable “old” or “new” compression, with the old style using the “feed back” type of compression found in the API 525, and the new style using the “feed forward” type in which the compressor side chain is fed directly from the unit input. Additionally, the output stage of the 2500+ offers an auto-makeup gain button that permits the user to vary the threshold or ratio while automatically maintaining a constant output level.

Added to the 2500+ is the Mix/Blend circuit. First featured in the limited production 50th Anniversary Edition, Mix/Blend control provides either cross fader or parallel mixing of the compressed and uncompressed signal. Three different user settings are offered: