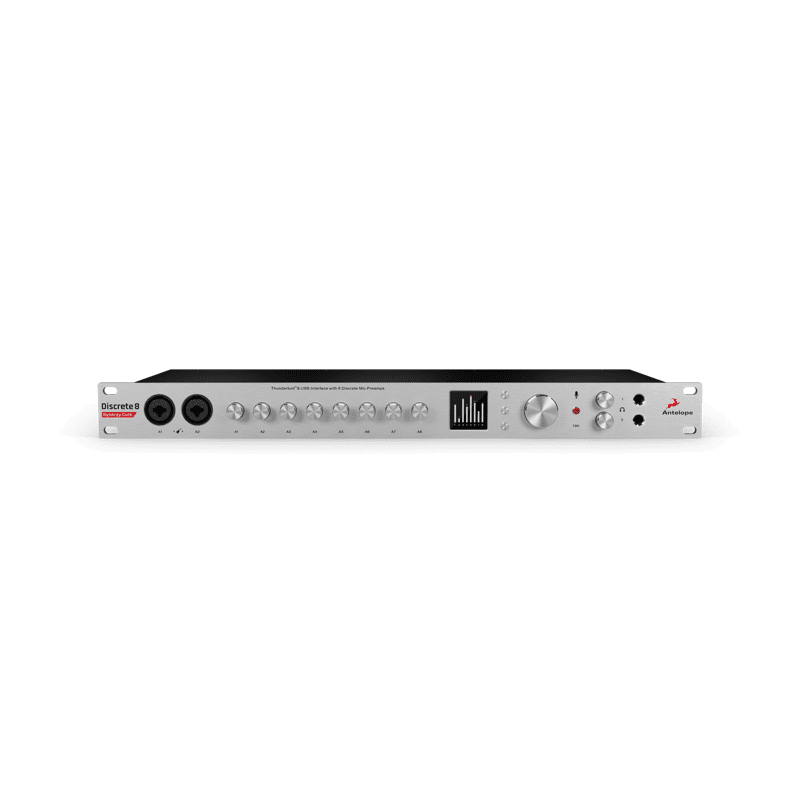 With two DSP chips and an FPGA chip under the hood, the Discrete 8 Synergy Core can run all your Antelope FX — stabilizing your DAW by offloading effects processing to dedicated chips, without bogging down your host CPU. With the Discrete 8 Synergy Core in your rack, you don’t need a latest-spec computer to run your favorite plugs. Antelope effects running on Antelope hardware means you can shorten buffer size, reduce latency, and free up your host Mac or PC to run CPU-hogging VST synths and native time-based effects.

Antelope’s unique Synergy Core platform combines FPGA + DSP in one interface. With the Discrete 8 Synergy Core, you get state-of-the-art ARM DSPs with faster clock rates than chips found in lesser interfaces, plus Antelope’s proven FPGA platform that delivers lower latency in FX chains. This exclusive hybrid architecture enables a wider variety of Antelope effects than ever — time-based delays, choruses, flangers, and more. Your Discrete 8 Synergy Core comes with $3,000 of plug-ins: compressors, EQs, reverbs, amp models based on iconic vintage gear — and all the processing power you need to run them!

Analog-to-digital and digital-to-analog converters are at the heart of every DAW-based studio — and your converters can make or break your sound. That’s why the Antelope Audio Discrete 8 Synergy Core offers pristine AD/DA with 121 dB dynamic range on the analog inputs and class-leading 130 dB dynamic range on the monitor outputs, so you can capture and play back your audio with Antelope clarity.

More I/O for Your Growing Studio

Get the Studio Hook-Up with Antelope's Synergy Core Interfaces

Plus enter to win a discrete 4!