Dave Henszey first heard music in Atmos in 2017 when he attended a proSESSIONS event at Westlake Pro. “I knew it was the way forward,” says Henszey, who has spent over four decades mixing and producing records while also mixing for film and television, broadcast, and concert FOH sound.

Since its release in 2012, Dolby Atmos has changed the way we experience sound in entertainment. While stereo applications create two-dimensional sound, Dolby Atmos creates 360-degrees of immersive audio. Atmos offers greater realism and depth than legacy formats by adding overhead monitors, size control, 3D Object panning, tempo panning, and other Dolby technologies. It was first used for post-production sound editing but has slowly made its way into music production, creating a new and exciting way to experience music.

After months of careful planning, design, and installation by the Westlake Pro Studio Design Group and Dolby Laboratories, Dave’s newly completed studio, Henszey Sound, LLC, packs a huge punch in a compact space, capable of recording and mixing music for radio, film, television, VR, gaming, and ADR from stereo up to Dolby Atmos. 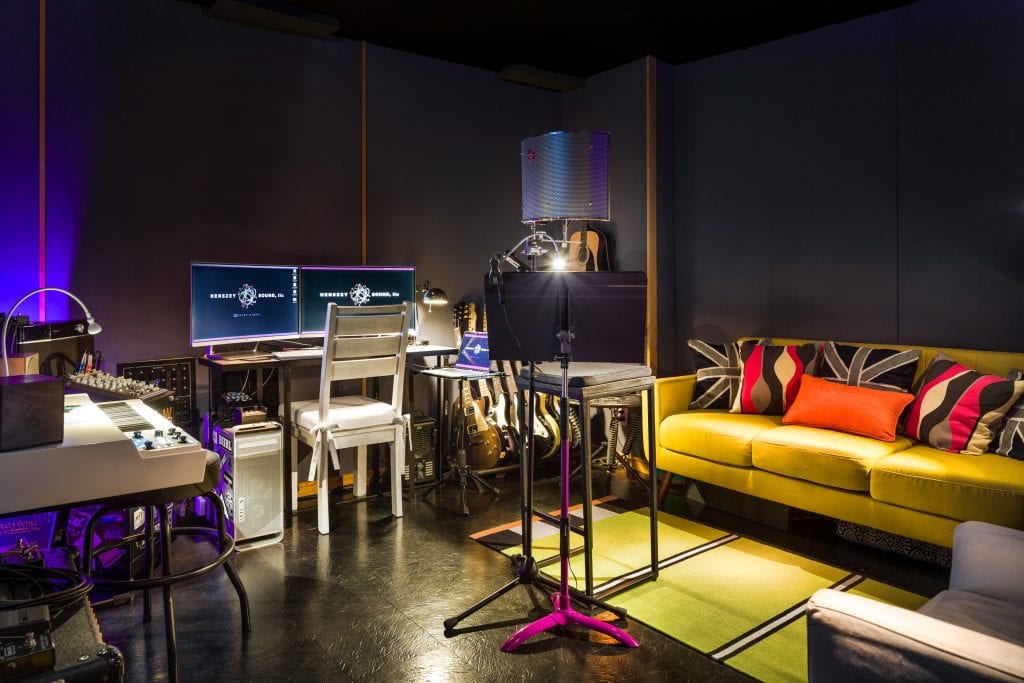 While the aesthetic is pleasing, the beauty of Henszey Sound lies within its groundbreaking capability to switch between Atmos, stereo, and tracking at the touch of a button. Atmos builds are typically for post-production facilities wherein no recording actually takes place. At Henszey Sound, you can do both; if Dave is mixing for a client and decides a line of dialogue should be replaced, voice talent could come in to record in mono or stereo, and he can switch back to mixing in Atmos almost instantly.

“We chose the Focusrite Red 8Pre as the central interface for the system so we could take advantage of all of its routing capability. The new RedNet control and the Red 8Pre really allow you a ton of flexibility. You can configure half of your inputs as Dante and half of them as analog,” he says.

Implementing Dante allowed for the routing of hundreds of channels of audio over a simple Ethernet network. The Red 8Pre allows for presets and “snapshots” for different workflows and I/O settings to be loaded quickly. In addition to the Red 8Pre, Westlake Pro integrated three RedNet HD32R’s to expand the Pro Tools I/O, along with two Avid HDX cards, to meet the 128 channels requirement for Dolby Atmos.

“The Atmos system is completely Dante-based,” says Lawrence. “Having everything on the Dante network provides the flexibility to route anything anywhere. Same thing with the analog I/O. You can set it up for use with Pro Tools hardware inserts, or track guitars in the booth, or just about anything else you can think of. There are inputs and outputs to and from the system on custom-engraved panels in the control room and iso booth.” 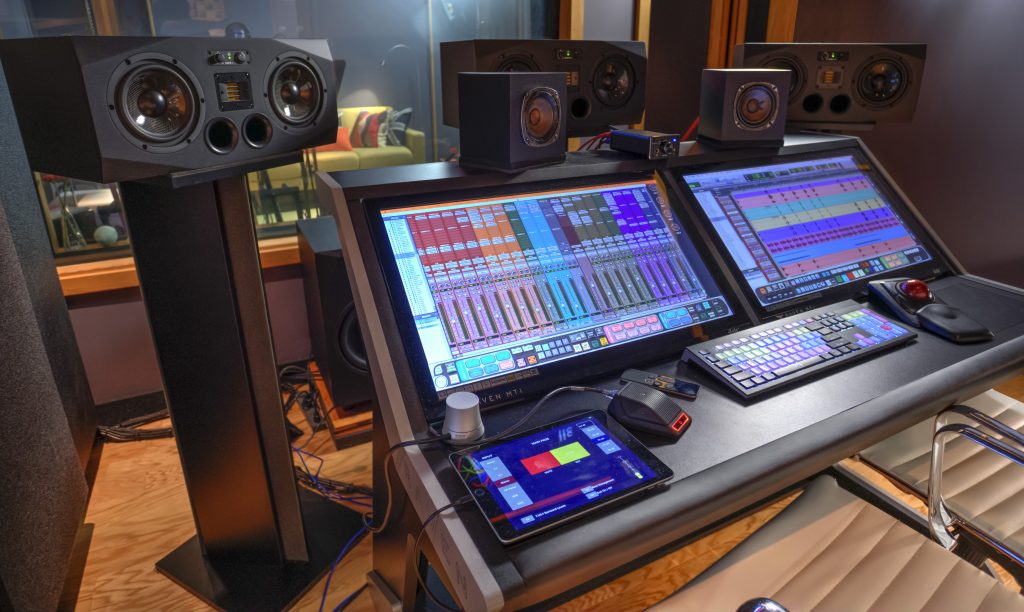 Henszey insisted on using ADAM Audio monitors for his immersive audio mixing and recording studio. “I’ve been using ADAM Audio monitors for years, and I wanted that same quality in my studio,” he says. Dave has mixed on many different monitors throughout his four-decade career but has come to favor ADAM Audio. “With ADAMs, I didn’t have to think anymore. What I thought sounded right translated to other sound systems every time. It comes down to trust and once you find that there’s no going back.”

ADAM Audio monitors are traditionally used for music production applications and have been popular in recording studios and post-production houses for decades. “The theory behind everything we do is transparency, translation, and durability,” says ADAM Audio representative Alex Spencer. “We create monitors that tell the story how it’s supposed to be told. What you hear is exactly how you want it in your mix, as opposed to it being accentuated in your studio while sounding different everywhere else.”

Dolby had never spec’d ADAM monitors before, so no one knew what to expect when they were tested with the Dolby DARDT tool. DARDT is used to simulate whether or not the monitors can handle up to 105dB of sound pressure. To everyone’s delight, the ADAM monitors had more than enough headroom to pass certification and performed well beyond expectations. After the ADAM Monitors breezed through Dolby’s DARDT certification, Westlake Pro designed custom mounting brackets to fasten the overhead speakers of the 7.1.4 immersive monitoring system.

Henszey is able to quickly switch sources and formats using the Harman HiQnet app. The app, programmed by the Westlake Pro Studio Design Group, controls a BSS BLU-806DA DSP and monitor controller so that Henszey can switch between stereo, surround, or Atmos formats

“With ADAMs, I didn’t have to think anymore. What I thought sounded right translated to other sound systems every time. It comes down to trust and once you find that there’s no going back.”

After its completion, Henszey’s studio had to be certified by Dolby. Even before construction began on the room, Westlake Pro and Dolby spec’d the room to ensure the room would be Dolby Atmos compliant. Precise measurements of mix positions, screen positions, speaker angles, and structural drawings were carefully planned out and recorded on diagrams by Westlake Pro, first taking into consideration the placement of the monitors and mixing position of the engineer. Once those measurements were determined, the rest of the studio was designed around them as to not interfere with the sound field. The certification included room tuning, Atmos training, and updates to the Dolby Mastering Suite and Renderer.

Want to check out the studio for yourself? Visit https://henszeysoundllc.com/ to connect with Dave.

Click the button below to check out more photos from Henszey Sound, LLC, and our portfolio of studio design services.