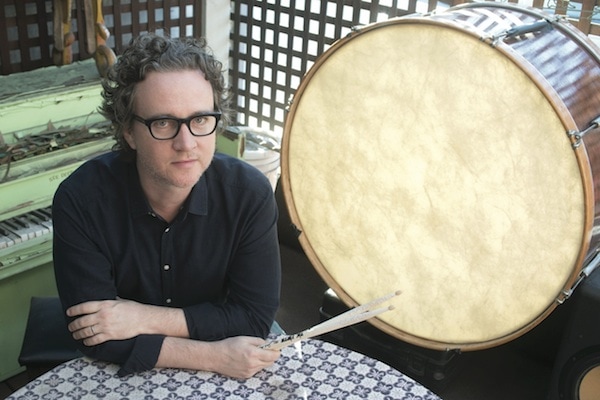 Join our YouTube Live Stream on February 26th as Grammy-Winning Record Producer Greg Wells (John Legend, “The Greatest Showman”) showcases the analog processing power of McDSP’s extraordinary 1U processing box, and how he implements it in his day to day workflow. Plus, RSVP and watch the livestream for a chance to win your very own McDSP Everything Pack, all 26 of their powerful plugins (a $2,749 value!).

About the Event
Meet Greg Wells
rsvp + add to calendar
How Will The Live Stream Work?
Where To Watch
About the APB
Meet the APB's
The Plugins
The Connection
Order Yours

Few producers in music can rival the pedigree and resume of Grammy-winning producer, mixer, songwriter and multi-instrumentalist Greg Wells. The man The Police’s Stewart Copeland once dubbed “the studio Swiss Army knife” for his wide range of skills has crafted hits on more than 125 million units sold, from the worldwide smash soundtrack of The Greatest Showman, Adele, John Legend, Taylor Swift, Twenty One Pilots, P!nk, Keith Urban, Deftones, Katy Perry and OneRepublic. A renowned musician on many instruments, Wells’ career has transcended sonic guidance, as the fluent pianist, guitarist, bassist, and drummer has mastered the balance between hands-on help and drawing out an artist’s own sound regardless of genre.

In contrast to many of his peers, Wells’ career has never been about creating an aural stamp to imprint a “signature sound.” Despite his vast knowledge and lifelong interest in music, Wells prefers to be a guiding sensei in the studio rather than an overshadowing presence. “You have to jump into the pool with the artist and quickly assess what’s happening,” says Wells. “You want to hear somebody lost in their own performance with a complete lack of self-consciousness. For me, the goal is to shine the best light on the artist themselves and help them be as true to themselves as possible. I’m more the basketball coach than the player.”

In 1990, Wells moved to Los Angeles and studied with famed jazz composer, pianist and Prince’s string arranger Clare Fischer. After recording, and subsequently shelving, his own album — “It was a great lesson in what never to repeat” — Wells turned to producing and writing for others. Wells has a core knowledge is essential and rare, and it’s why rapper Theophilus London can roll to Wells’ studio in the morning and Dua Lipa can cut a track later that afternoon with both feeling confident with the results.

This unparalleled versatility, spirit, and musical fluency continues to make him one of the most talented and sought-after producers, songwriters and musicians in the industry. 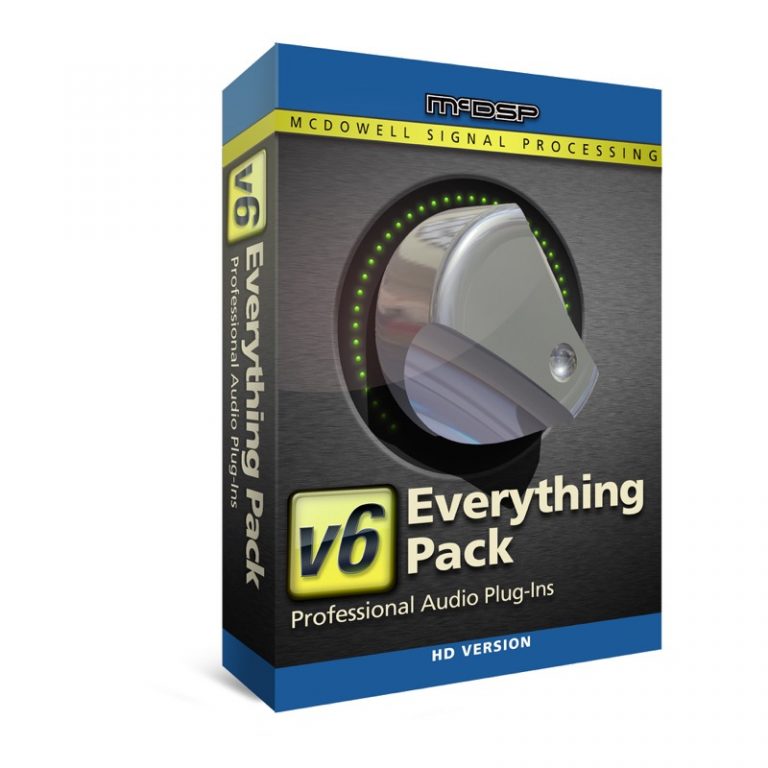 The Live Stream is hosted on our YouTube Channel, but is best viewed here, on the Event landing page
at 2 PM PST.

How Do I Win?
How Long Is This Event?

Our events usually run longer than anticipated. We typically aim for the event to be 1 hour long,
but a flood of great questions from viewers can push the length beyond that. 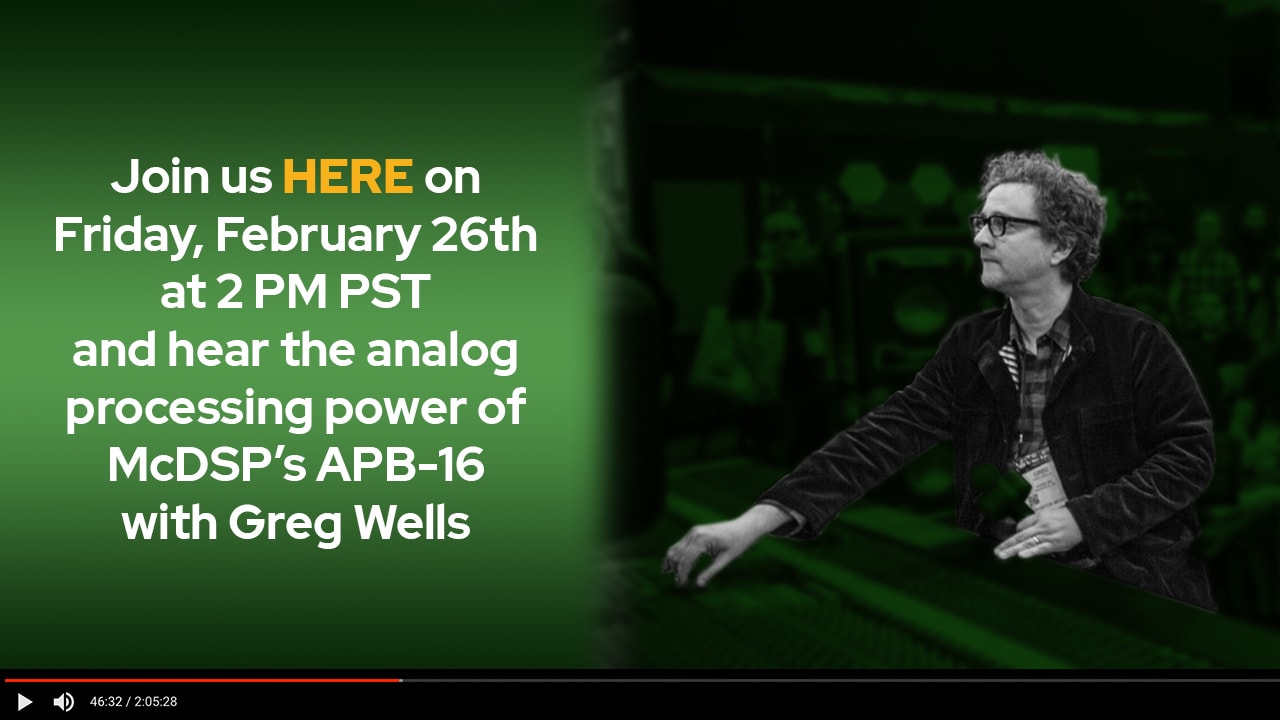 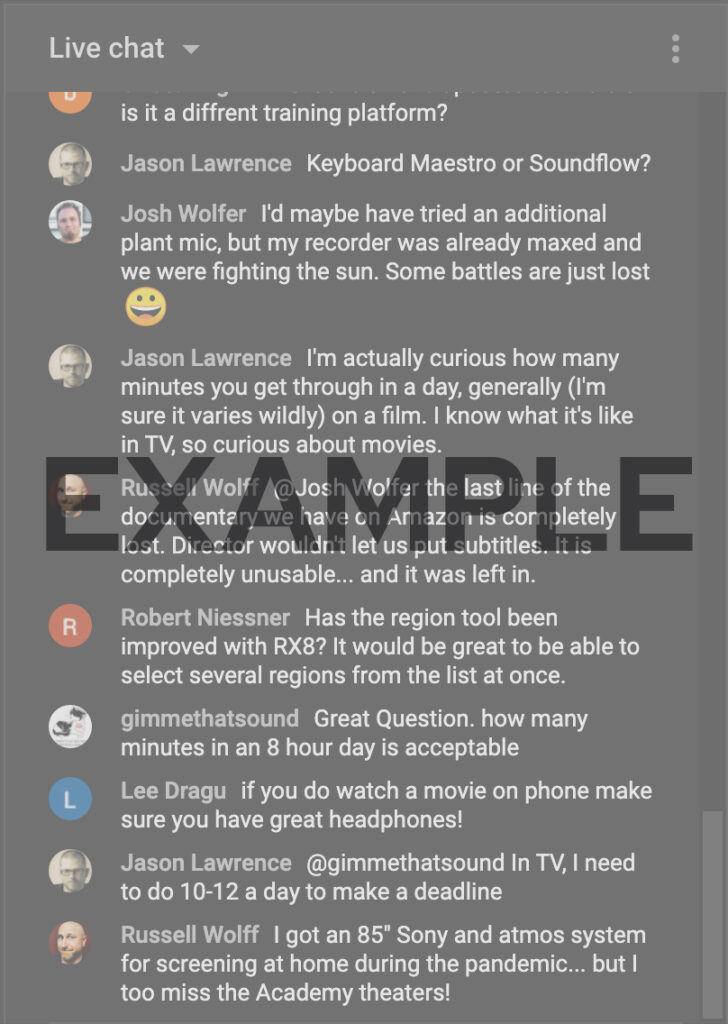 The McDSP Analog Processing Box (APB) combines the flexibility of software with the fidelity of premium analog processing. Each channel can be controlled by an AAX, AU, or VST3 plug-in giving true digital workflow with genuine analog performance. Processing options include compressors, mastering limiters, transient enhancement devices, multi-channel and multi-band applications, and much more.

The APB-8 and APB-16 come with a collection of APB plug-ins to route audio to the APB hardware and control the analog circuitry within. The user simply operates the APB plug-in like any other plug-in, but processing is done in the analog domain. Settings can be saved as a preset, plug-ins can be recalled with a session, and parameters can even be automated with sample level accuracy. APB plug-ins provide true digital workflow with genuine analog performance.

The Royal Mu is a dual-channel compressor and limiter. Features include analog biasing and saturation, mid/side processing, equalization, and a full featured analog compressor and analog limiter. The Royal Mu offers independent (or linked) control of the left/right (or mid/side) channels.

The Royal Q is a dual-channel 4-band equalizer featuring parametric and shelving EQ, mid/side processing, and trim controls. The Royal Q equalization is complimented by a custom analog section for a truly unique hybrid processor. The Royal Q offers independent (or linked) control of the left/right (or mid/side) channels. 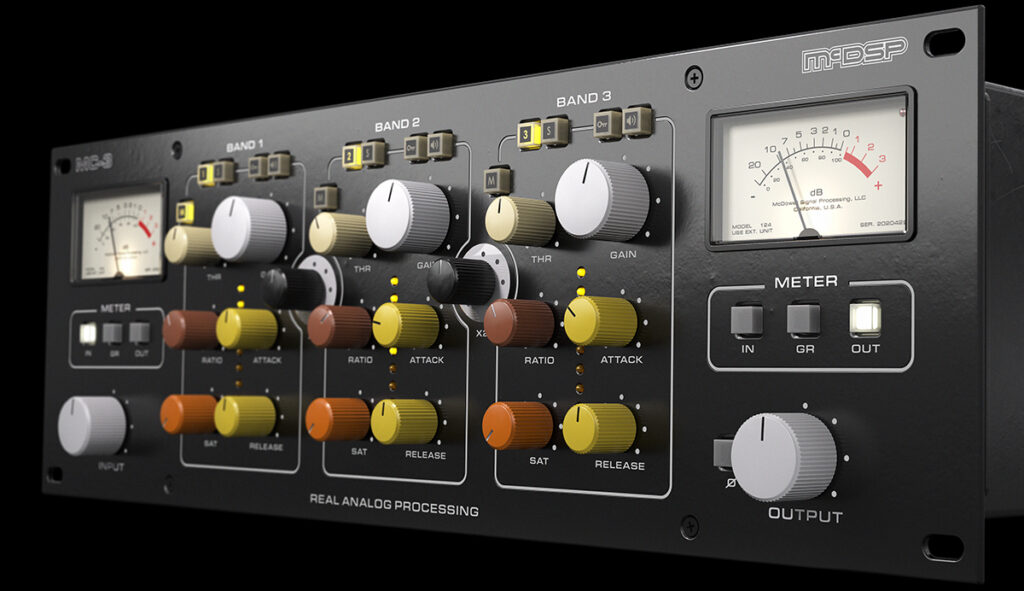 The MC-3 Multi-band Compressor is the world’s first fully automated analog multi-band compressor. The matched and calibrated analog channels of the APB hardware make the MC-3 one of the most precise analog multi-band compressors available. Analog saturation control is also available per band. All MC-3 parameters are automatable and can be saved as a preset for instant session recall. 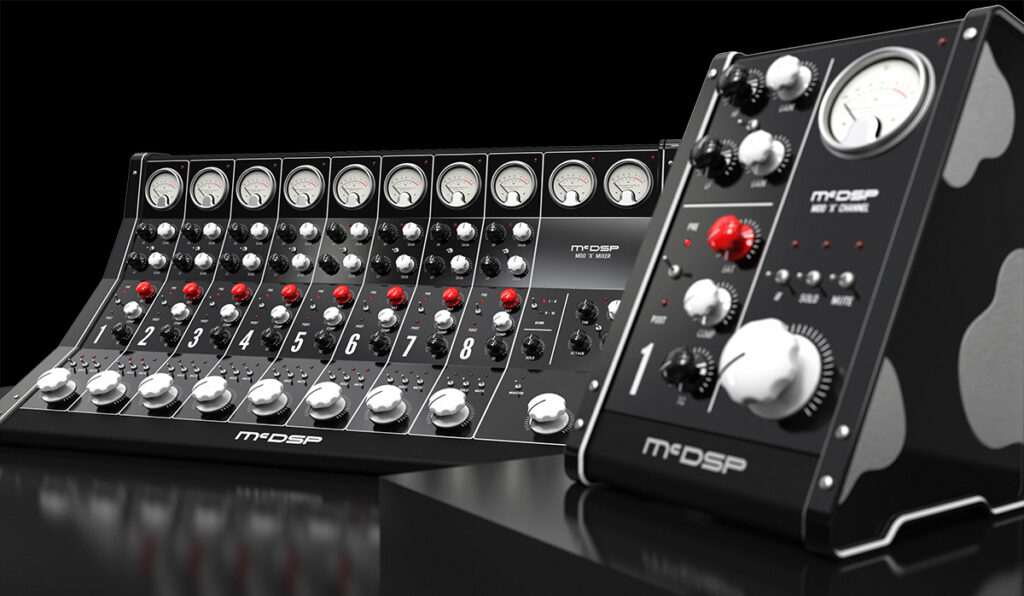 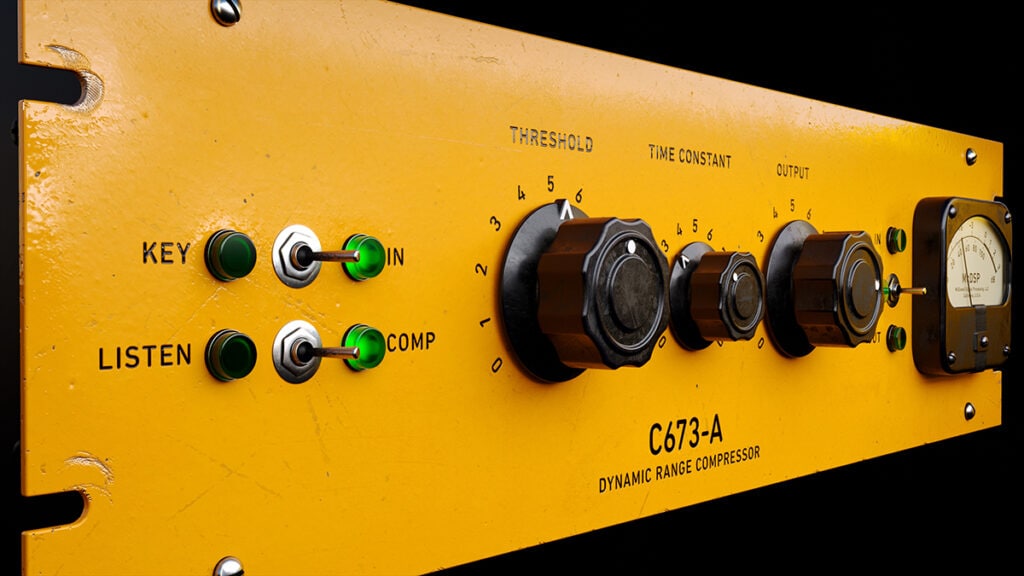 The C673-A served as the initial prototype for the concept of the world’s first programmable analog processor. Based on McDSP’s C670 and C671 modules from the McDSP 6000 series plug-ins, the C673-A model pushes the envelope further with all analog dynamics processing and a custom saturation circuit.

One of two all-analog limiters in the APB plug-in lineup, the El Moo leverages the same design used in the MooTube compressor. An adjustable all-analog saturation stage with user control makes the El Moo an interesting choice as a sonic leveler.

The MooTube Compressor is the capstone of the collection of McDSP tube-based compression algorithms. Combining decades of software-side modeling experience with the world’s first programmable analog processor, the MooTube delivers a soft touch to anything that goes through it.

It may look familiar to some, but under the hood the ChickenHead is a completely unique processor on a completely unique platform. McDSP engineering sought to leverage the high end analog components and most aggressive saturation circuit in the APB hardware to create a compressor with attitude. If you are looking for the rooster in the hen house of dynamic range processors, the ChickenHead is it. 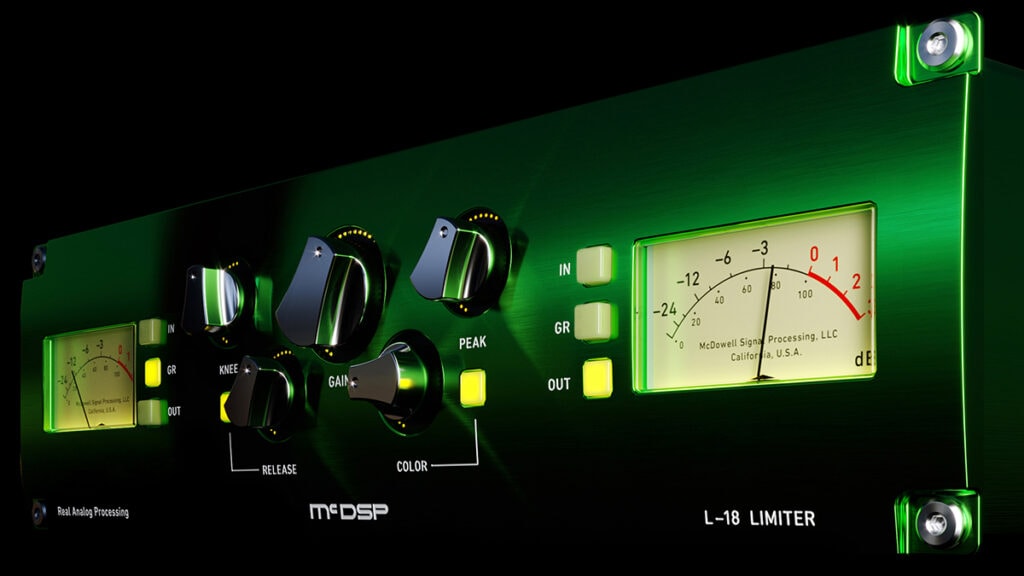 The C-18 compressor, like the L-18 limiter, is designed to be a pristine, green, audio machine. Tribute is paid to the first McDSP dynamics plug-in, CompressorBank, with an all-analog version of the unique BITE control, and an advanced version of the AUTO feature for signal level dependent attack and release times. The C-18 can be a straight up utility processor, or introduce some new and unique twists to any track. 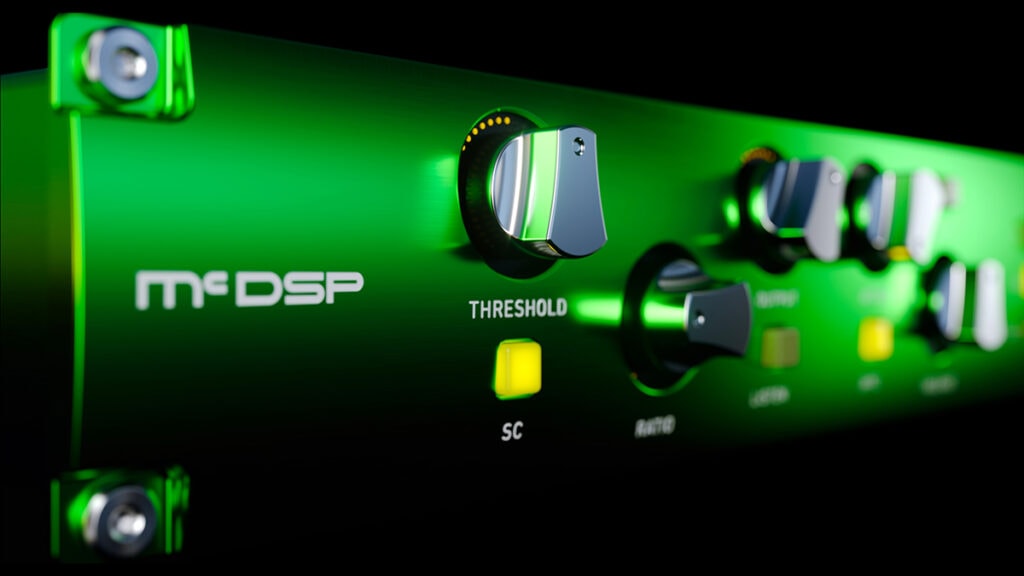 An APB plug-in takes the input audio signal, combines it with a control signal, and sends both along a Thunderbolt connection to an APB hardware unit for processing. The control signal sets up the analog components to do the selected algorithm with all the parameter values, and the audio signal is processed in the analog domain, and then converted back to the digital domain, and appears at the output of the APB plug-in back inside the Pro Tools session.