Congratulations to our Top 5 TEC 2019 Winners! 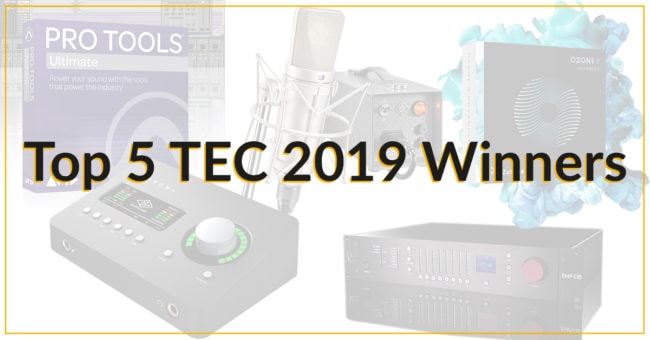 Every year, the NAMM show brings tons of buzz surrounding countless new product announcements. While this gives us a glimpse of where the recording world will be going in the year to come, the TEC awards give us a chance to look back at some of the most innovative tools from the previous year. Standing for Technical Excellence & Creativity, this year’s list of winners and nominees is a testament to quality and innovation. With a huge lineup of stellar tools in every category, we’ve narrowed this list down to our Top 5 winning products. Read on to learn more about what won and why!

Since the introduction of the Digital Audio Workstation, Pro Tools has been at the forefront of recording technology. To this day, Pro Tools remains a studio standard. Used in almost every facet of audio production, mixing, and editing, Pro Tools systems have been used to create countless GRAMMY winning records, blockbuster movies, hit TV shows, podcasts, and more. Formerly known as Pro Tools HD, Avid continues to bring a number of advancements to the newly titled Pro Tools | Ultimate. With a host of workflow enhancements, collaboration features, new software instruments, intuitive MIDI control, and iLok Cloud support, Avid continues to prove why Pro Tools is the standard for audio professionals.

Don’t let its size, let alone cost fool you! If you’re familiar with the formidable Apollo series of audio interfaces, you’ll feel right at home with the Universal Audio Arrow. A sleek and portable Thunderbolt 3 interface with 2 Unison-enabled preamps, instrument input, stereo analog output, and high-quality headphone out, the Arrow packs quite the punch. Add on a plug-in bundle featuring 14 legendary studio processors and amplifiers from the award-winning UAD-2 collection, and you’ve got a full-fledged virtual studio in your back pocket. This isn’t just another entry-level interface – it’s your ticket bringing the award-winning power and tone of the UAD-2 platform with you on the road. And did we mention it’s bus-powered? Perfect for impromptu hotel sessions, plane rides, and touring.

In the audio world, Rupert Neve is a man that needs no introduction. His legendary preamps, consoles, and studio processors have graced countless hits for generations. With the introduction of the RMP-D8, you can now bring those tones to the stage. Featuring eight remote-controlled preamps, custom-designed transformers, Dante connectivity, and mastering-grade conversion, The RMP-D8 isn’t just another quality preamp for your studio. It’s a slick, forward-thinking package that’s ready for the rigors of the road while feeling equally at home in a world-class studio.

From “Hey Jude” to Nirvana’s “Nevermind,” the Neumann U67 has been a studio workhorse since it was introduced to the market in 1960. How good is this mic? Just ask 23-time GRAMMY-winning recording legend Al Schmitt (Frank Sinatra, Michael Jackson, Madonna) who says, “If I could only use one microphone – just one mic – it would be a Neumann U67.” That’s all well and good, but how does the re-issue stand up to the remaining vintage models? It should suffice to say that Neumann took such care in recreating the U67 from the original schematics that the parts are fully interchangeable. A sonic comparison will bolster this claim. The biggest difference between the reissue and the original is that you won’t need to be cutting sessions short in order to take your vintage mic in for costly repairs every other week.

For many, mastering is a “dark art,” which requires years of experience, a perfectly tuned room, and $100,000 worth of specialized studio gear. Of course, none of these things hurt, but what happens if you don’t have any of those? iZotope has answered that question with their latest installment of Ozone, their all-in-one mastering suite. A full collection of specialized mastering tools, Ozone 8 Advanced provides everything you need to get a radio-ready master. With the inclusion of machine-learning technology and unprecedented connectivity with other iZotope plug-ins (like TEC 2019 nominee Neutron in the same category), Ozone 8 Advanced provides everything you need to create a competitive master – right in your laptop.

Just being nominated for the prestigious TEC Awards is an honor in itself. Obviously, a trim list like this only tells half the story, so we’d like to honor some of the other TEC winners.

Universal Audio had an incredibly busy year, and their numerous wins and nominations in the 2019 TEC Awards (including many of their latest plug-ins across multiple categories) show just a fraction of what they were up to in 2018. The OX Amp Top Box is an essential tool for both the studio and stage. Being a reactive load-box that lets you get classic, juicy guitar tones at any volume is just a part of the OX story. Built-in FX, cabinets, mic modeling, rig presets, and dynamic speaker breakup allow you to get the most out of your amp without any loss in tone or feel.

From home studios to Atmos cinema installs and powerful line array systems, it’s safe to say JBL knows how to design a speaker system for any situation. With precise detail, a wide sweet spot, and a new boundary EQ feature, the JBL 3 Series MKII brings the best of the company’s long history to your studio at an affordable price.

Dave Smith, also known as “The Father of MIDI,” is a legend in the synth world. His mark on the synth world is indelible, having created the Prophet 5 alongside a wide range of both classic and modern synthesizers like the Prophet VS, OB-6, Rev 2, and more. The Prophet X brings new worlds of sound to the Prophet line with a unique Samples + Synthesis architecture. Admittedly, I was a bit confused by the announcement. That changed the second I played it. The gorgeous layout and sturdy construction make it an intuitive instrument that’s as deep as it is fun. The Prophet X is a perfect addition to your arsenal, whether you’re a musician, sound designer, or composer. With the addition of user-samples and increased polyphony, the Prophet X is a truly inspiration tool.

So Much Gear, So Little Time

That’s a wrap for our top winners from the TEC 2019 Awards, but there was plenty of other gear featured at this year’s NAMM show. Which announcement are you most excited about? Which TEC 2019 winners are you hoping to try in YOUR studio? Let us know in the comments!