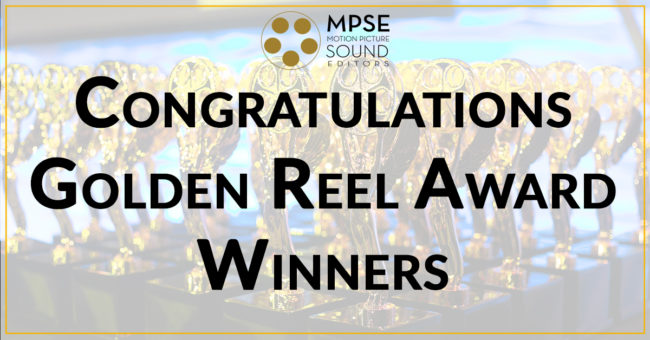 Every year, the Motion Picture Sound Editors, or MPSE, gather in Los Angeles to award praise to talented artists who bring life to the big screen through sound. When it comes to editing audio, the goal is often to go unnoticed. This invisibility allows the audience to become fully immersed in the world shown on the screen. The obvious downside to this is that the general public often leaves the theater discussing the actors, visual effects, and soundtrack without a second thought towards the people that make the sounds of each element work. From Foley Artists to Sound Designers, Dialogue Editors, and beyond, the MPSE has made a point to honor these hardworking artists with a well-deserved Golden Reel.

From Bohemian Rhapsody to Roma, Spider-Man to Westworld, read on to see who took home a prestigious Golden Reel award!

The Golden Reel for Outstanding Achievement in Sound Editing – Feature Documentary was a close tie between the gripping Free Solo and the impressive They Shall Not Grow Old. Another tie was for Outstanding Achievement in Sound Editing – Episodic Short Form – Music / Musical, which was shared by the History Channel’s Vikings and the FX original American Horror Story: Apocalypse.

The FX Channel scored big with additional wins for their hit shows The Americans and Atlanta who won for Dialogue/ADR and Effects/Foley, respectively.

Is Streaming the New Small Screen?

While streaming has seen a huge increase in production, premium cable services like HBO have risen to the challenge with big-budget epics like Game of Thrones and Westworld, the latter of which took home a Golden Reel for Dialogue/ADR.

From Computer Games to Cardboard

Streaming is not the only platform that has seen huge gains in content, quality, and budgets. Both video games and Virtual Reality have become new frontiers for visual storytelling. Of course, music and sound are essential to creating the worlds presented. Consequently, the MPSE has included a wide range of categories to cover the achievements in these fields.

Among the winners was Blizzard Entertainment’s World of Warcraft: Battle for Azeroth, which won in the Computer Cinematic category, while Santa Monica Studio took home the trophy for Computer Interactive Game Play for their work on God of War.

One of the most consistently interesting categories is titled Special Venue, which goes to features that explore a new or budding medium. VR has been a buzzword in the entertainment community for the past few years, and many of this year’s nominations highlight some of the possibilities with the new technology. This year’s Golden Reel winner went to the team at Chromospheres for their work with Google Spotlight Stories on the gorgeous Age of Sail, which is available in VR with Google Cardboard.

Led by President Tom C. McCarthy, the MPSE honors the past, present, and future of the Motion Picture Sound Editors. Stephen H. Flick was awarded a Golden Reel for Career Achievement, while Antoine Fuqua won this year’s Filmmaker Award. Lastly, the National Film and Television School took home the Verna Fields Award for the student film Facing It.

Obviously, everyone in attendance was well aware of the hard work and creativity that goes into editing sound for picture. Unfortunately, many moviegoers have little understanding of what goes into getting the sounds and dialogue coming from the speakers. If this is you, one of the easiest ways to honor the Motion Picture Sound Editors is to press “Mute” next time you watch a movie. Without editors for Music, Sound, Foley, and ADR, you’d never hear swords clash, dialogue would be a wash of wind noise, and silence would reign king over large swaths of your favorite films.

Want to learn more about editing sound for film?

Interested in seeing how members of the MPSE bring sound to theaters? Check out our exclusive proSESSIONS series, where Golden Reel Nominee David Bach (Argo, Dunkirk, Suicide Squad) shows us how he uses iZotope RX7 to shape sounds for the big screen.