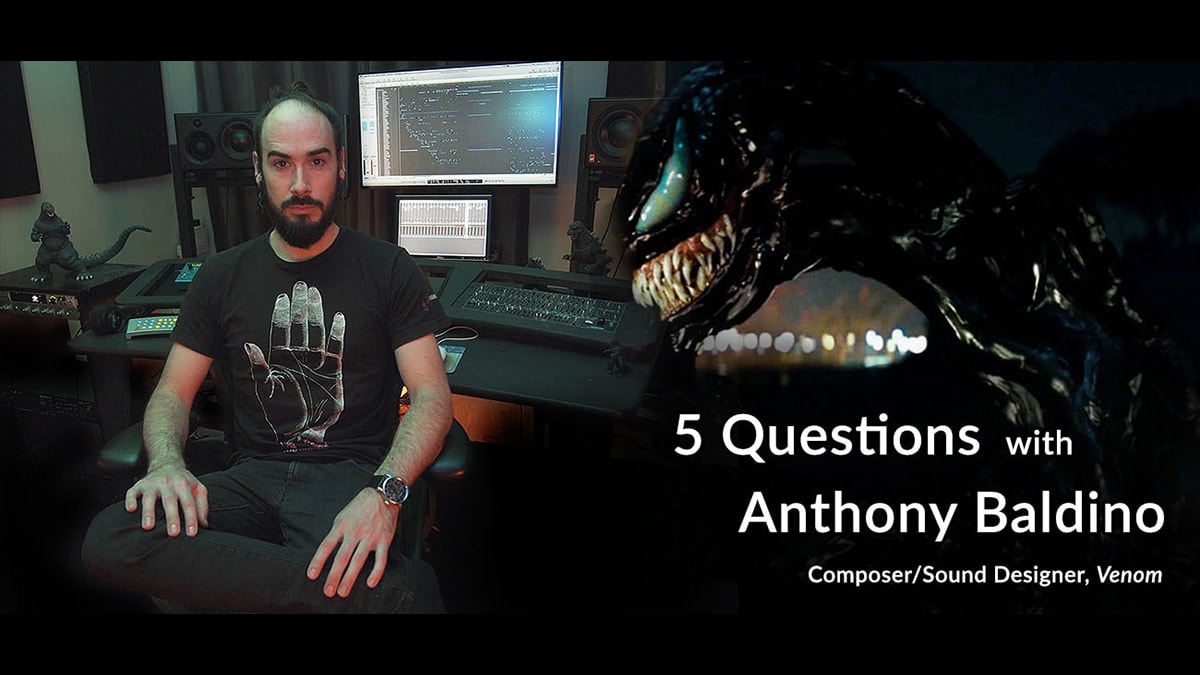 Whether you know it or not, if you’ve been to the movies lately, you’ve heard the work of Composer/Sound Designer Anthony Baldino. He’s responsible for composing the action-packed music featured in the trailers for many of today’s biggest blockbusters, including Interstellar, Star Wars: Rogue One, Zero Dark Thirty, Avengers: Infinity War, Prometheus, and Ex-Machina. Obviously, a soundtrack must match or enhance the feel and emotion of the film. The music for the trailer has to do all of that in about two minutes while building excitement and weaving between quick cuts, sound FX, and snippets of dialogue common to modern trailers. It’s a unique format and workflow that Baldino has mastered.

Most recently, Baldino got to use his huge collection of vintage, modern, and modular synths and effects while working with composer Ludwig Göransson (Black Panther) and longtime friend and fellow sound designer Chris Lane (Ghostbusters) for the out of this world soundscapes, alien whispers, and rhythmic textures for the record-breaking Venom movie, which debuted last month.

We got to chat with him a bit to discuss his workflow, studio setup, and experience shopping with Westlake Pro.

1. You’re well known for your work composing movie trailers, remixes, and your own music. How does this compare to your work on Venom and other long-form projects like a feature-length film?

Either they’re all completely different, or they have common similarities. For the latest work I did on Venom, the most noticeable difference was the sheer amount of variation on all the sounds and rhythmic content I was creating or processing. It was a massive amount of content with variations on variations, but it was necessary in order to address all the levels of intensity and emotion happening on the screen.

“Once you get to the meat of the cue, it’s almost as if you already know it”

Obviously, it’s also important not to get stale throughout the duration of the score, so having the option of even really subtle variation was really important. To an extent, it’s almost like working on a trailer or remix. If I’m doing a piece of music for a trailer, I’ll find my theme and try to rework some form of it into every section. Even if the opening is just a drone, it will be derived from my main theme, so once you get to the meat of the cue, it’s almost as if you already know it. If I’m working on a piece that relies heavily on sound design, there might be one signature sound that really stands out from the rest, but all the other sounds that keep the piece moving forward have to be recognizably different enough from one another. At the same time, they can’t be so drastically different that it sounds like five different tracks mashed together. I guess the easier way of putting it is that variation is important for all types of music, but for a feature length, I find myself generating not only a lot more content but also way more variations.

My current studio setup is a room that seems to be constantly shrinking. I’ve been adding gear slowly but consistently, and it always feels like I’m running out of space! At the front of my room, I have my ATC SCM25A’s on Sound Anchor ADMID1 stands, and I’m running stereo Subwoofer Pros Studio 12 subwoofers, so I have full frequency range in each channel. I’m tying all of this together with a Dangerous Audio Monitor ST. One thing that was a real game-changer for my monitoring setup was adding the IsoAcoustics ISO-Pucks into the equation. I have four under both ATCs and both subs, and once I did, the imaging and the low end really tightened up. I also have a huge display set behind the ATCs so as not to interfere with the stereo image.

“Once I did, the imaging and the low end really tightened up”

I’m working at a Sound Construction mastering desk with three rack spaces that are currently housing my Deckard’s Dream, a tray that I use for various pedals depending on what I’m currently working on and I have one open rack that will soon be filled with a lot of 500 series modules. (Thanks in advance Westlake Pro!) Directly to my left, then continuing around the back wall and ending up at my right are all of my synths. The back wall is mostly taken up by my eurorack system. I’ve always loved the Tip Top Audio 252 cases, so I have several of those filled with modules from several of my favorite manufacturers.

3. Do you have any favorite, go-to pieces of gear?

Oh, definitely! My number one all-time go-to piece of gear is my ARP 2600. That thing ends up on every single project I do, no matter what. I also have a few Eurorack modules that I couldn’t live without, but I’ll save that for when we have way more time to go down the rabbit hole!

4. Any advice for people looking to get into composition and sound design?

One of the main things I’d tell people (and my 24-year-old self, if I could) would be to invest in your monitoring system and solid mixing gear/plug-ins. Really do some homework on mixing. It took me a long time to get my music to sound the way I wanted, and for the sounds, I’m designing to sound as polished or violent as I wanted them to be. A lot of that has to do with how I’m approaching both [music and sound] from a mix point of view.

There are so many amazing creative tools for composition and sound design, and I really focused heavily on those when I was first starting out. I’m not saying don’t explore those tools, but those tools helped me make really cool music and sounds, but not necessarily great sounding music and sounds. I was doing that for a long time before I invested in better mixing tools, and once I did, especially higher end speakers, it occurred to me that I was actually kind of working against myself. I feel like once you crack that code, it’s so much easier to get composition and/or sound design projects across the finish line. Maybe that’s just me, but I think it helps a lot!

5. How long have you been shopping with Westlake Pro? Tell us about your experience!

I’ve been shopping with Westlake Pro for only about three years, but I wish I had known to go there long ago! There’s something unique about Westlake Pro in the fact that they really help you find what you’re actually looking for. Not once has anyone said, “Oh, you don’t want that, this is the ____ that you really want,” and that means a lot to me. It took me a long time to find the right monitors for me.

I’ve been able to demo countless speakers, both at the Westlake Pro location here in Los Angeles as well as in my studio, and I never felt pressured to jump to any conclusions on what to buy. The tools you decide on really shape how you make music as well as shape your relationship to music, so finding the right tools for you is really important. Westlake Pro has really helped in that regard.

When he’s not busy creating and composing new sounds and music for trailers and blockbuster films, Anthony Baldino can be found writing his own music, remixing other artists, and performing around Los Angeles.

You can find out more about his work here: anthonybaldino.net